Haley Traub (Theater 2008) recently shared about her experience working in theater in New York City. After graduating from Perpich, Traub received a BFA at NYU’s Tisch School of the Arts in 2012 and most recently formed a theater collective with some fellow NYU grads. 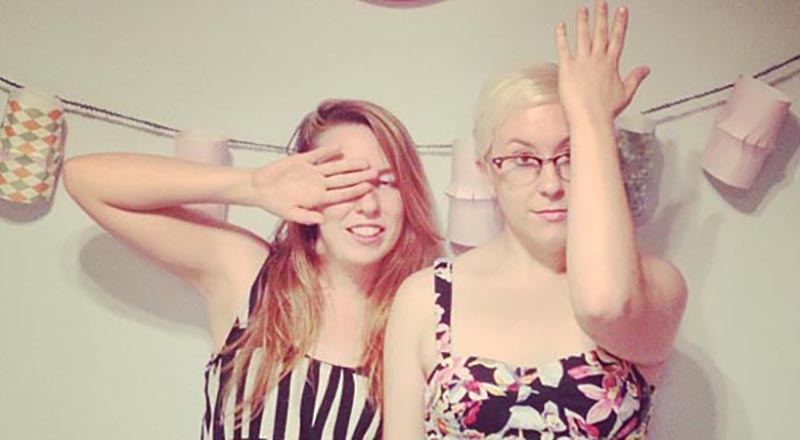 Traub (on right), poses with another member of her theater collective, Carroll Simmons

Tell us about the work you’ve been doing with your theater collective, Carroll Simmons:

We formed a little over a year ago with the idea that we wanted to create work that focused on observing pop culture in a new way. All of our founding members are NYU grads of various acting studios, so we bring a wide background of training to the process. Our first show, Too Many Lenas, detailed the lives of six Lena Dunhams living and working together in a Brooklyn loft through the use of nonlinear portraiture and absurd physical theater. Much to our surprise, the show sold out its debut run on New York’s Lower East Side. We workshopped the show for a little while after that, until we decided to write the “sequel”, Too Many Lenas 3: Let Them Eat Cake, which is being produced by two New York City theaters this summer.

It sounds like you’ve been keeping busy (to say the least) over the past few years—what have been some of the highlights?

It’s been a whirlwind few years of wearing lots of different hats. My first job after graduating NYU was narrating audio books for Audible.com. It was that work that made me realize how much I love voice acting. I also did some acting work with CollegeHumor and recently filmed an episode for the next season of HBO’s “Girls.”

What are your future plans?

Working with my collective has made me realize how much I love creating and performing original work, so I’m looking forward to starting our next project. I’m currently writing a web series with a friend from school and gearing up for rehearsals for a new movement project—think a movement-focused version of “Her.”

How, if at all, did attending Perpich shape who you are as an artist and/or person?

Perpich helped me to be more open as both an artist and a person. Being at Perpich taught me how to work with all sorts of people with different artistic backgrounds and approaches. It was there that I began to learn how to collaborate, which is a priceless tool both in the art world and the “real” world.