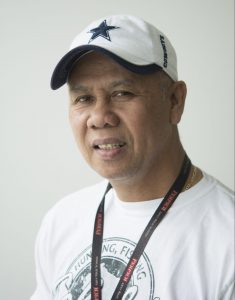 Ben Aban began working at Perpich in February, 2005. He came to the U.S. from the Philippines in 2004 along with his wife and two children. Before the big move, he worked in the construction trades where he worked his way up to being the driver for the vice president of the company. After his arrival to the U.S., he worked part-time as a mail handler and sorter for the postal service. Back when Perpich used an outside cleaning service, Ben was part of that company and stood out as one of their most outstanding employees. When Perpich decided to hire their own cleaning staff, Ben was the first person to be chosen for the position and has been here ever since. He states that he really likes working around the students and staff and that he feels appreciated when students meet him in the hallway and say hi. Ben has a great personality and takes pride in his work here at Perpich. Ben will always say, “No Mess, No Money.”