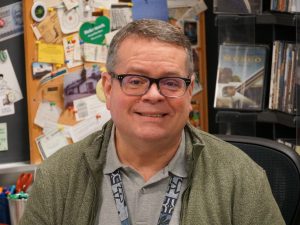 Kevin Clark joined the Perpich faculty in 1990 as a German instructor. He earned a B.A. in German and speech communications from Westmar College and taught English in Francophone West Africa (Chad and Senegal) with the Peace Corps. Upon completion of his foreign service, he attended the University of North Dakota, where he completed graduate coursework in German literature with a minor in French. He helped to create, and currently teaches, a course with the University of Minnesota/College in the Schools program in communications. Kevin was a leader for a trip to Berlin and St. Petersburg with the Perpich Arts High School Study Tour class in 2008. He also has led Perpich class trips to China in 2011, 2012, and 2013. He received a Fulbright Award in 2013 to travel to Germany for studies there.