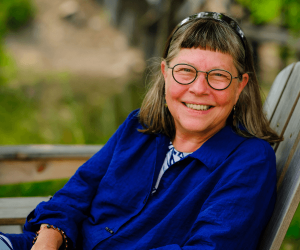 Since April of 2018, Rebecca Lynn Petersen has served as the Director of Development at West Central Initiative. Her appointment to the Board, made by Gov. Tim Walz and Lt. Gov. Peggy Flanagan, went into effect on March 9, 2022 and expires January 1, 2024.

Prior to coming to West Central Initiative, Rebecca served as the Executive Director of the Duluth Superior Symphony Orchestra, executing and overseeing production of eight Symphony Seasons (over seven years), hiring their current Music Director, negotiating musicians’ union contracts, and raising the funds to bring the symphony out of debt before she moved back to Fergus Falls. She has always been a fan of fundraising for non-profits. Her role as Executive Director of Fergus Falls A Center for the Arts from 1994 to 2011 was a labor of love and involved a lot of programming, community building, and fundraising for operating support, a capital campaign to renovate the Fergus Theater, and a community partnership with Artspace Projects to renovate the Kaddatz Hotel into a facility for artists and arts organizations to thrive.

Rebecca and her husband Mark are empty nesters with three dogs – all Doodles. Rebecca thought that this life change would give her more opportunities to say yes to volunteering and as a result she may have to learn to say no in the future. Currently she is a Board member of the following organizations: Greater Fergus Falls (economic development non-profit organization), Fergus Falls Port Authority, Pioneer Public Television, Kaddatz Galleries, Inc., Minnesota Humanities Center, Fergus Falls Sunrise Rotary, and Perpich Center for Arts Education.

In her spare time, Rebecca practices the violin to prepare for rehearsals and performances with the Fargo Moorhead Symphony, The Bemidji Symphony, and the Itasca Symphony.