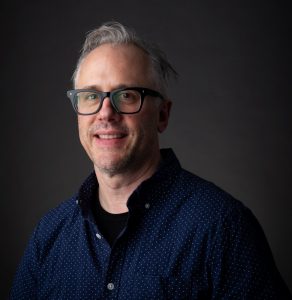 After two years of sheltering in place and teaching online, it was a sweet and unexpected adventure for David Bowman, Media Arts Instructor, to drive to Chicago to be inducted into the Nazareth Academy Fine Arts Hall of Fame. Bowman was named an Outstanding Fine Arts Graduate defined as: a graduate of Nazareth Academy who participated in and contributed to the fine arts (art, dance, drama, music, or writing) while a student; is currently a fine arts professional, a long-term, committed fine arts amateur or a fine arts educator who has made a significant contribution to the fine arts or has shown a high level of commitment to the fine arts; and has been in his or her field for a minimum of ten years.

“Especially now, after having built a successful career as a professional artist, I’m honored to be recognized in my new role as high school media instructor,” said Bowman. “One of the things I love most about working at Perpich is that I’m teaching students who remind me so much of who I was when I first picked up a camera.”

David Bowman is a 2020 Nazareth Academy Fine Arts Hall of Fame Inductee. The ceremony was delayed two years due to the COVID-19 pandemic. David Bowman joined Perpich in 2021 in the Media Arts department. Bowman grew up in Chicago, studied writing in Madison, traversed the Australian outback via camel, and drifted to the Twin Cities some time thereafter. One of the first people David met in Minnesota was fashion photographer Richard Avedon. He was giving a talk to students at the Minneapolis Institute of Art, and David asked him what advice he might give a struggling artist. Avedon responded, “Start working.” So he did, ultimately making photographs for the likes of Rolling Stone, Vanity Fair, National Geographic, Target, Disney, and Dwell. In time, he earned an MFA and was named Best Of ASMP by the American Society of Media Photographers. You can visit David’s website for more information: https://www.bowmanstudio.com

Nazareth Academy, a Catholic, co-educational, college preparatory high school in La Grange Park, Illinois, is among the oldest educational institutions in Chicago’s western suburbs. It was established by a pioneering group of Sisters of St. Joseph who came to the La Grange area in 1899. Their first school, with an enrollment of fourteen, was in a remodeled six-room house. A school building was constructed in 1901 and an addition to it in 1949. Until 1963, the school enrolled both resident and day students. In 1974, Nazareth moved its operations to its current location, 1209 West Ogden Avenue. The high school became coeducational in 1977, and today it serves an area approximately 25 miles long and 10 miles wide in Cook and DuPage counties. Nazareth enrolls students from more than 120 local grammar schools in over 60 communities.

Images from the Hall of Fame Induction Ceremony at Nazareth Academy 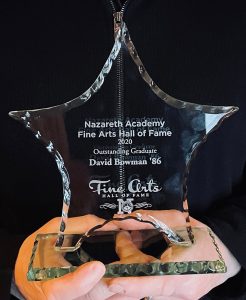 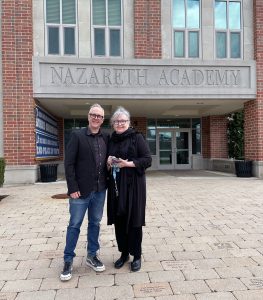 David Bowman with his high school photography teacher, Nan Garside, standing outside the school. 2022 is Nan’s final year teaching as she’s set to retire in May, 2022. 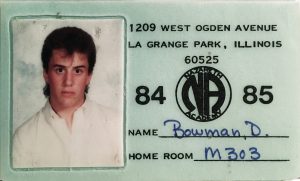