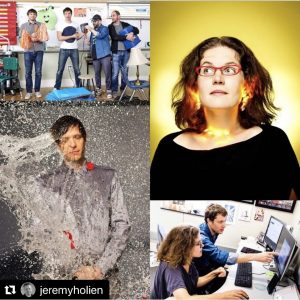 Jeremy Holien, Education Specialist in Visual and Media Arts, served as Convention Coordinator for the 2020 National Art Education Association (NAEA) National Leadership Conference. Because of COVID-19, the conference went virtual in July. As an expert in media arts instruction, Jeremy arranged for speakers Damian Kulash, Jr. and AnnMarie Thomas for the Artist Keynote portion. OK Go lead singer and guitarist Kulash Jr. and Thomas, founder and director of the Playful Learning Lab at the University of St. Thomas, shared an inside view of the OK Go Sandbox – an online resource for educators that uses the Grammy Award-winning band OK Go’s music videos as starting points for integrated guided inquiry challenges allowing students to explore various STEAM concepts. Holien said he was super excited for the message of perseverance, reinvention, and dealing with the unknown that [Kulash and Thomas brought] to the 2020 NAEA Leadership Conference. They spoke of creativity, flexibility, collaboration, embracing the unknown, and shared instructional resources with the hundreds of virtual attendees.

Damian Kulash, Jr. is an artist, musician, filmmaker, and the front-man for the polymath rock group OK Go. He’s directed the band’s long string of boundary pushing music videos, racking up more than 300 million views online. They’ve danced in zero gravity and on treadmills, they’ve built a warehouse sized Rube Goldberg machine to run in sync with a song, and they’ve choreographed hundreds of explosions filmed in just a few seconds. Kulash has received the Smithsonian American Ingenuity Award for Visual Art, a Grammy, three MTV VMA’s, 21 Cannes Lions, three Webby Awards, and has had his work presented at the Guggenheim, MoCA, LACMA, the Hirschhorn, the Hammer Museum, and Seattle’s Museum of Pop Culture. Kulash graduated magna cum laude from Brown University in 1998. He’s written for the New York Times, the Wall Street Journal, the Washington Post, and Rolling Stone, and testified before the U.S. Congress in support of net neutrality. He serenaded Barack Obama at his 50th birthday party, appeared on The Simpsons, and Animal from the Muppets once played the drums in his garage. He lives and works in Los Angeles.

AnnMarie Thomas is a professor in the School of Engineering and the Opus College of Business at the University of St. Thomas. She is the founder and director of the Playful Learning Lab, which explores ways to encourage children of all ages to embrace playful learning. She and her students created Squishy Circuits. She is the author of Making Makers: Kids, Tools, and the Future of Innovation. Thomas earned PhD and MS degrees in mechanical engineering from Caltech, and an SB in ocean engineering (with a minor in music) from MIT. Additionally, she completed a professional certificate in sustainable design from the Minneapolis College of Art and Design. Thomas co-founded and co-directs the University of St. Thomas Center for Engineering Education (CEE), which offers engineering courses for preK–12 educators and conducts research on engineering at the pre-collegiate level. Her teaching covers classes on topics such as engineering graphics and design, machine design, dynamics (with circus lab), toy design, and brain machine interfaces. She served as the founding executive director of the Maker Education Initiative, where her team established the national Maker Corps program and laid the groundwork for this nonprofit. Thomas lives in St. Paul, Minnesota, with her husband and two daughters. She is an amateur aerialist, specializing in static and flying trapeze, as well as juggling and cyr wheel.