This month the Perpich library is putting a spotlight on the books and DVDs in our collection that focus on the histories, cultures, and contributions of American citizens whose ancestors came from Spain, Mexico, the Caribbean, and Central and South America. September 15 – October 15 is National Hispanic Heritage Month! All items on this list are available at the Perpich library. Click on titles for more information. 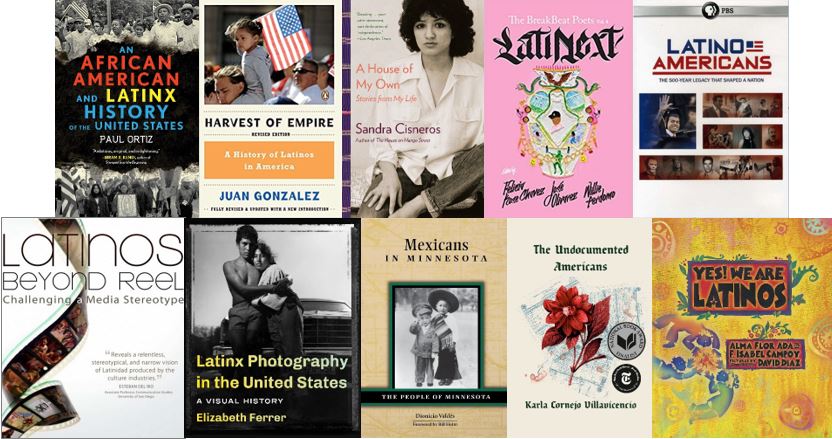 2. Harvest of Empire: A History of Latinos in America by Juan Gonzalez
Latinos are now the largest minority group in the United States, and their impact on American popular culture-from food to entertainment to literature-is greater than ever. Featuring family portraits of real- life immigrant Latino pioneers, as well as accounts of the events and conditions that compelled them to leave their homelands, Harvest of Empire is required reading for anyone wishing to understand the history and legacy of this increasingly influential group.

3. A House of My Own: Stories from My Life by Sandra Cisneros
Written with her trademark lyricism, in these signature pieces the acclaimed author of The House on Mango Street and winner of the 2019 PEN/Nabokov Award for Achievement in International Literature shares her transformative memories and reveals her artistic and intellectual influences. Poignant, honest, and deeply moving, A House of My Own is an exuberant celebration of a life lived to the fullest, from one of our most beloved writers.

4. LatiNext edited by Felicia Chavez, José Olivarez, & Willie Perdomo
In the dynamic tradition of the BreakBeat Poets anthology, The BreakBeat Poets Vol. 4: LatiNext celebrates the embodied narratives of Latinidad. Poets speak from an array of nationalities, genders, sexualities, races, and writing styles, staking a claim to our cultural and civic space.

5. Latino Americans PBS
This documentary chronicles the rich and varied history and experiences of Latinos, who have for the past 500-plus years helped shape what is today the United States. It is a story of people, politics, and culture, intersecting with much that is central to the history of the United States while also going to places where standard U.S. histories do not tend to tread. (6 episodes, 2 videodiscs, 360 min.)

6. Latinos Beyond Reel: Challenging a Media Stereotype Media Education Foundation
Filmmakers Miguel Picker and Chyng Sun examine how U.S. news and entertainment media portray–and do not portray–Latinos. Drawing on the insights of Latino scholars, journalists, community leaders, actors, directors, and producers, they uncover a pattern of gross misrepresentation and gross under-representation–a world in which Latinos tend to appear, if at all, as gangsters and Mexican bandits, harlots and prostitutes, drug dealers and welfare-leeching illegals. The film challenges viewers to think critically about the wide-ranging effects of these media stereotypes, and to envision alternative representations and models of production more capable of capturing the humanity and diversity of real Latinos. (84 min.)

7. Latinx Photography in the United States: A Visual History by Elizabeth Ferrer
Through individual profiles of more than eighty photographers from the early history of the photographic medium to the present, Elizabeth Ferrer introduces readers to Latinx portraitists, photojournalists, and documentarians and their legacies. She traces the rise of a Latinx consciousness in photography in the 1960s and ’70s and the growth of identity-based approaches in the 1980s and ’90s. Latinx Photography in the United States is the first book to offer a parallel history of photography, one that no longer lies at the margins but rather plays a crucial role in imagining and creating a broader, more inclusive American visual history.

8. Mexicans in Minnesota by Dennis Nodín Valdés
As one of the state’s fastest-growing ethnic groups, Mexican Americans have been part of Minnesota’s history since the early years of the last century. Author Dionicio Valdes discusses the struggles that these immigrants – particularly migrant workers – have faced in making Minnesota their home.

9. The Undocumented Americans by Karla Cornejo Villavicencio
One of the first undocumented immigrants to graduate from Harvard reveals the hidden lives of her fellow undocumented Americans in this deeply personal and groundbreaking portrait of a nation. Looking beyond the flashpoints of the border or the activism of the DREAMers, Cornejo Villavicencio explores the lives of the undocumented – and the mysteries of her own life. She finds the singular, effervescent characters across the nation often reduced in the media to political pawns or nameless laborers. The stories she tells are not deferential or naively inspirational but show the love, magic, heartbreak, insanity, and vulgarity that infuse the day-to-day lives of her subjects.

10. Yes! We Are Latinos: Poems and Prose About the Latino Experience by Alma Flor Ada & F. Isabel Campoy; illustrated by David Diaz
Thirteen young Latinos and Latinas living in America are introduced in this book celebrating the rich diversity of the Latino and Latina experience in the United States. Free-verse fictional narratives from the perspective of each youth provide specific stories and circumstances for the reader to better understand the Latino people’s quest for identity. Each profile is followed by nonfiction prose that further clarifies the character’s background and history, touching upon important events in the history of the Latino American people, such as the Spanish Civil War, immigration to the US, and the internment of Latinos with Japanese ancestry during World War II.