“Poetry is language at its most distilled and most powerful.” -Rita Dove 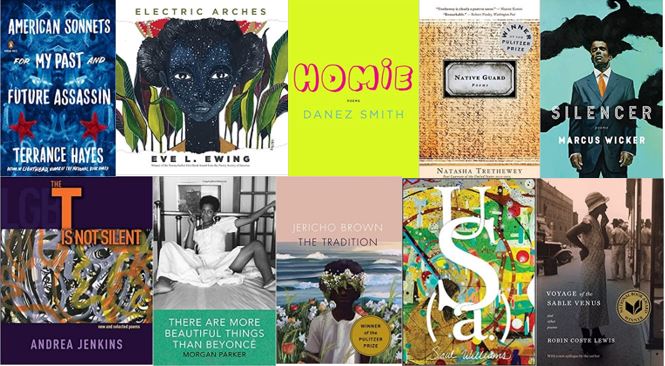 1. American Sonnets for My Past and Future Assassin by Terrance Hayes
In seventy poems bearing the same title, Terrance Hayes explores the meanings of American, of assassin, and of love in the sonnet form.
(to be purchased for the library in Spring 2021)

3. Homie: Poems by Danez Smith
Rooted in the loss of one of Smith’s close friends, this book comes out of the search for joy and intimacy within a nation where both can seem scarce and getting scarcer.

4. Native Guard: Poems by Natasha Trethewey
Through elegiac verse that honors her mother and tells of her own fraught childhood, Natasha Trethewey confronts the racial legacy of her native Deep South — where one of the first black regiments, the Louisiana Native Guards, was called into service during the Civil War.

5. Silencer by Marcus Wicker
In this collection, the language and cadences of hip-hop and academia meet prayer—these poems are crucibles, from which emerge profound allegories and subtle elegies, sharp humor and incisive critiques.

6. The T is Not Silent: New and Selected Poems by Andrea Jenkins
Visibility in the Trans community is increasing dramatically. Ultimately, this book is an effort to create understanding and awareness of a marginalized community written by the first black openly transgender woman elected to public office in the United States, serving since January 2018 on the Minneapolis City Council.

7. There Are More Beautiful Things Than Beyoncé by Morgan Parker
Unrelentingly feminist, tender, ruthless, and sequined, these poems are an altar to the complexities of black American womanhood in an age of non-indictments and deja vu, and a time of wars over bodies and power.

8. The Tradition by Jericho Brown
Poems of fatherhood, legacy, blackness, queerness, worship, and trauma are propelled into stunning clarity by Brown’s mastery, and his invention of the duplex – a combination of the sonnet, the ghazal, and the blues – is testament to his formal skill. Winner of the 2020 Pulitzer Prize for Poetry.
(to be purchased for the library in Spring 2021)

9. US (a.) by Saul Williams
Saul Williams presents his ideas, observations, realizations, dreams, and questions about the state of America, the American psyche, and what it means to be American.

10. Voyage of the Sable Venus: and Other Poems by Robin Coste Lewis
Robin Coste Lewis’s electrifying collection is a triptych that begins and ends with lyric poems meditating on the roles desire and race play in the construction of the self. National Book Award winner.

All items are available at the Perpich Library or will be soon.