Books in Verse from Perpich Library

In honor of National Poetry Month, the library is highlighting some of our incredible books written in verse, a form of narrative poetry. All items on this list are available at the Perpich library. Click on titles for more information. 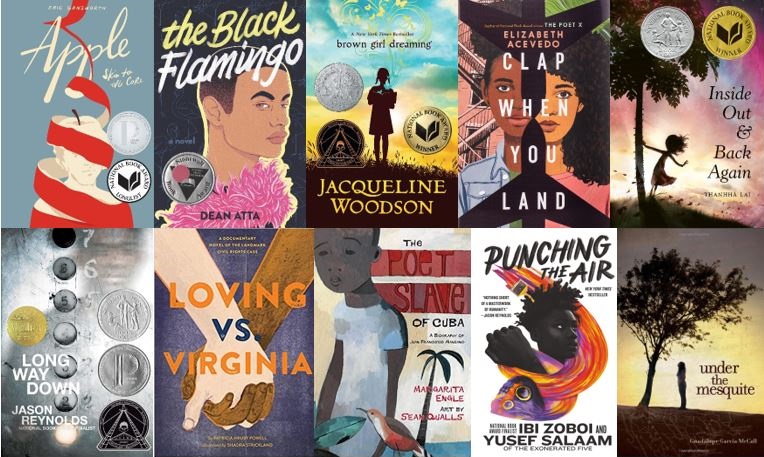 1. Apple: Skin to the Core by Eric Gansworth
The term “Apple” is a slur in Native communities across the country. It’s for someone supposedly “red on the outside, white on the inside.” In this memoir-in-verse, Eric Gansworth tells his story, the story of his family – of Onondaga among Tuscaroras – of Native folks everywhere. From the horrible legacy of the government boarding schools, to a boy watching his siblings leave and return and leave again, to a young man fighting to be an artist who balances multiple worlds.

2. The Black Flamingo by Dean Atta
Michael is a mixed-race gay teen growing up in London. All his life, he’s navigated what it means to be Greek-Cypriot and Jamaican – but never quite feeling Greek or Black enough. As he gets older, Michael’s coming out is only the start of learning who he is and where he fits in. When he discovers the Drag Society, he finally finds where he belongs – and the Black Flamingo is born.

3. Brown Girl Dreaming by Jacqueline Woodson
Raised in South Carolina and New York, Woodson always felt halfway home in each place. In vivid poems, she shares what it was like to grow up as an African American in the 1960s and 1970s, living with the remnants of Jim Crow and her growing awareness of the Civil Rights movement. Touching and powerful, each poem is both accessible and emotionally charged, each line a glimpse into a child’s soul as she searches for her place in the world.

4. Clap When You Land by Elizabeth Acevedo
Camino Rios lives for the summers when her father visits her in the Dominican Republic. But this time, on the day when his plane is supposed to land, Camino arrives at the airport to see crowds of crying people… In New York City, Yahaira Rios is called to the principal’s office, where her mother is waiting to tell her that her father, her hero, has died in a plane crash. Separated by distance – and Papi’s secrets – the two girls are forced to face a new reality in which their father is dead and their lives are forever altered. And then, when it seems like they’ve lost everything of their father, they learn of each other.

5. Inside Out & Back Again by Thanhhà Lai
Hà has only ever known Saigon: the thrills of its markets, the joy of its traditions, and the warmth of her friends close by. But now the Vietnam War has reached her home. Hà and her family are forced to flee as Saigon falls, and they board a ship headed toward hope – toward America. Inspired by the author’s childhood experience as a refugee – fleeing Vietnam after the Fall of Saigon and immigrating to Alabama – this coming-of-age debut novel told in verse has been celebrated for its touching child’s-eye view of family and immigration.

6. Long Way Down by Jason Reynolds
As Will, fifteen, sets out to avenge his brother Shawn’s fatal shooting, seven ghosts who knew Shawn board the elevator and reveal truths Will needs to know. Told in short, fierce staccato narrative verse, Long Way Down is a fast and furious, dazzlingly brilliant look at teenage gun violence.

7. Loving vs. Virginia: A Documentary Novel of the Landmark Civil Rights Case by Patricia Hruby Powell and Shadra Strickland (illustrator)
From acclaimed author Patricia Hruby Powell comes the story of a landmark civil rights case, told in spare and gorgeous verse. In 1955, in Caroline County, Virginia, amidst segregation and prejudice, injustice and cruelty, two teenagers fell in love. Their life together broke the law, but their determination would change it. Richard and Mildred Loving were at the heart of a Supreme Court case that legalized marriage between races, and a story of the devoted couple who faced discrimination, fought it, and won.

8. The Poet Slave of Cuba: A Biography of Juan Francisco Manzano by Margarita Engle and Sean Qualls (art)
A lyrical biography of a Cuban slave who escaped to become a celebrated poet. Born into the household of a wealthy slave owner in Cuba in 1797, Juan Francisco Manzano spent his early years by the side of a woman who made him call her Mama, even though he had a mama of his own. Denied an education, young Juan still showed an exceptional talent for poetry. His verses reflect the beauty of his world, but they also expose its hideous cruelty. Powerful, haunting poems and breathtaking illustrations create a portrait of a life in which even the pain of slavery could not extinguish the capacity for hope.

9. Punching the Air by Ibi Zoboi and Yusef Salaam
From award-winning, bestselling author Ibi Zoboi and prison reform activist Yusef Salaam of the Exonerated Five comes a powerful YA novel in verse about a boy who is wrongfully incarcerated. Amal Shahid has always been an artist and a poet. But even in a diverse art school, because of a biased system he’s seen as disruptive and unmotivated. Then, one fateful night, an altercation in a gentrifying neighborhood escalates into tragedy. Suddenly, at just sixteen years old, Amal is convicted of a crime he didn’t commit and sent to prison. Despair and rage almost sink him until he turns to the refuge of his words, his art. This never should have been his story. But can he change it?

10. Under the Mesquite by Guadalupe Garcia McCall
Lupita, a budding actor and poet in a close-knit Mexican American immigrant family, comes of age as she struggles with adult responsibilities during her mother’s battle with cancer in this young adult novel in verse. Told with honest emotion in evocative free verse, Lupita’s journey toward hope is captured in moments that are alternately warm and poignant. Under the Mesquite is an empowering story about testing family bonds and the strength of a young woman navigating pain and hardship with surprising resilience.