Representation in literature is important, especially for widely misunderstood groups such as transgender and non-binary people. Reading stories with trans and non-binary characters validates the experiences of those who identify as such and helps to promote empathy and understanding in the broader community. All items on this list, curated by our Perpich librarian, Anne Dennison, are available at the Perpich library. Click on titles for more information. 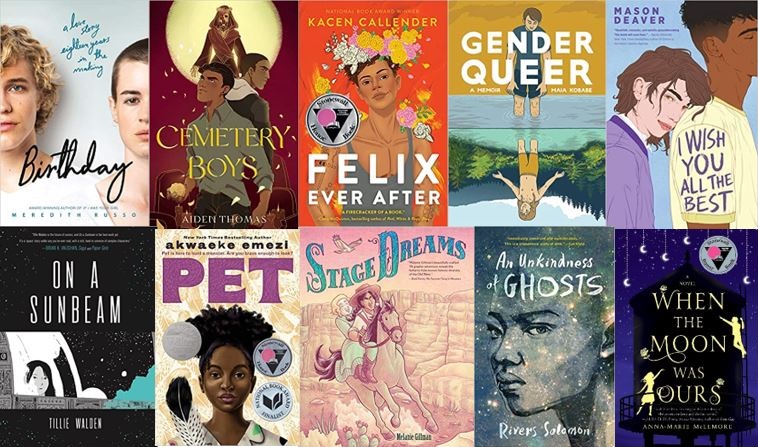 1. Birthday by Meredith Russo
Two kids, Morgan and Eric, are bonded for life after being born on the same day at the same time. We meet them once a year on their shared birthday as they grow and change: as Eric figures out who he is and how he fits into the world, and as Morgan makes the difficult choice to live as her true self. Over the years, they will drift apart, come together, fight, make up, and break up – and ultimately, realize how inextricably they are a part of each other.

2. Cemetery Boys by Aiden Thomas
When his traditional Latinx family has problems accepting his gender, Yadriel becomes determined to prove himself a real brujo. With the help of his cousin and best friend Maritza, he performs the ritual himself, and then sets out to find the ghost of his murdered cousin and set it free. However, the ghost he summons is actually Julian Diaz, the school’s resident bad boy, and Julian is not about to go quietly into death. He’s determined to find out what happened and tie up some loose ends before he leaves. Left with no choice, Yadriel agrees to help Julian, so that they can both get what they want. But the longer Yadriel spends with Julian, the less he wants to let him leave.

3. Felix Ever After by Kacen Callender
Felix Love has never been in love – and, yes, he’s painfully aware of the irony. He desperately wants to know what it’s like and why it seems so easy for everyone but him to find someone. What’s worse is that, even though he is proud of his identity, Felix also secretly fears that he’s one marginalization too many – Black, queer, and transgender – to ever get his own happily-ever-after. An honest and layered story about identity, falling in love, and recognizing the love you deserve.

4. Gender Queer by Maia Kobabe
Maia Kobabe, who uses e/em/eir pronouns, charts eir journey of self-identity, which includes the mortification and confusion of adolescent crushes and grappling with how to come out to family and society. More than a personal story: it is a useful and touching guide on gender identity – what it means and how to think about it – for advocates, friends, and humans everywhere.

5. I Wish You All the Best by Mason Deaver
When Ben De Backer comes out to their parents as nonbinary, they’re thrown out of their house and forced to move in with their estranged older sister, Hannah, and her husband, Thomas, whom Ben has never even met. Ben’s attempts to survive the last half of senior year unnoticed are thwarted when Nathan Allan, a funny and charismatic student, decides to take Ben under his wing. As Ben and Nathan’s friendship grows, their feelings for each other begin to change, and what started as a disastrous turn of events looks like it might just be a chance to start a happier new life.

6. On a Sunbeam by Tillie Walden
Throughout the deepest reaches of space, a crew rebuilds beautiful and broken-down structures, painstakingly putting the past together. As new member Mia gets to know her team, the story flashes back to her pivotal year in boarding school, where she fell in love with a mysterious new student. Soon, though, Mia reveals her true purpose for joining their ship – to track down her long-lost love.

7. Pet by Akwaeke Emezi
There are no more monsters anymore, or so the children in the city of Lucille are taught. With doting parents and a best friend named Redemption, Jam has grown up with this lesson all her life. But when she meets Pet, a creature made of horns and colors and claws, who emerges from one of her mother’s paintings and a drop of Jam’s blood, she must reconsider what she’s been told. Pet has come to hunt a monster, and the shadow of something grim lurks in Redemption’s house. Jam must fight not only to protect her best friend, but also to uncover the truth, and the answer to the question: How do you save the world from monsters if no one will admit they exist?

8. Stage Dreams by Melanie Gillman
In this rollicking queer western adventure, Flor and Grace, a Latinx outlaw and a trans runaway, team up to thwart a Confederate plot in the New Mexico Territory. When Flor – also known as the notorious Ghost Hawk – robs the stagecoach that Grace has used to escape her Georgia home, the first thing on her mind is ransom. But when the two get to talking about Flor’s plan to crash a Confederate gala and steal some crucial documents, Grace convinces Flor to let her join the heist.

9. An Unkindness of Ghosts by Rivers Solomon
Aster has little to offer folks in the way of rebuttal when they call her ogre and freak. She’s used to the names; she only wishes there was more truth to them. Aster lives in the lowdeck slums of the HSS Matilda, a space vessel organized much like the antebellum South. For generations, Matilda has ferried the last of humanity to a mythical Promised Land. On its way, the ship’s leaders have imposed harsh moral restrictions and deep indignities on dark-skinned sharecroppers like Aster. Embroiled in a grudge with a brutal overseer, Aster learns there may be a way to improve her lot – if she’s willing to sow the seeds of civil war.

10. When the Moon Was Ours by Anna-Marie McLemore
To everyone who knows them, best friends Miel and Sam are as strange as they are inseparable. Roses grow out of Miel’s wrist, and rumors say that she spilled out of a water tower when she was five. Sam is known for the moons he paints and hangs in the trees, and for how little anyone knows about his life before he and his mother moved to town. But as odd as everyone considers Miel and Sam, even they stay away from the Bonner girls, four beautiful sisters rumored to be witches. Now they want the roses that grow from Miel’s skin, convinced that their scent can make anyone fall in love. And they’re willing to use every secret Miel has fought to protect to make sure she gives them up.