For Black History Month, the library is highlighting some of the incredible Black science fiction and fantasy authors we have in our collection. All items on this list are available at the Perpich library. Click on titles for more information. 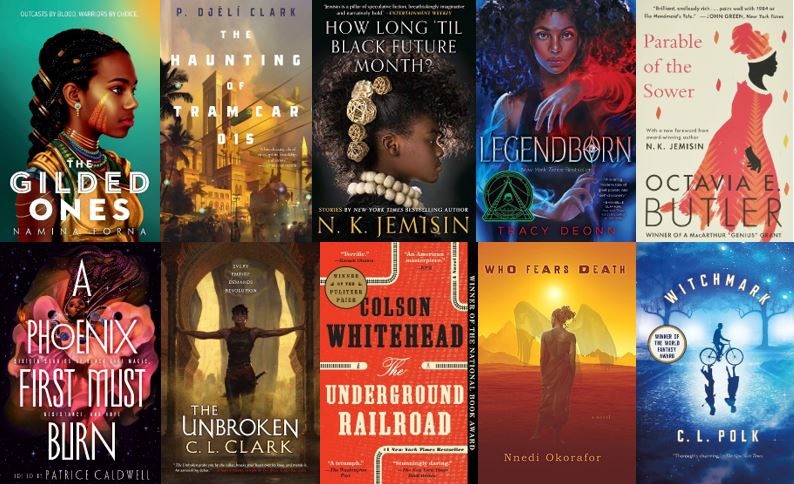 1. The Gilded Ones by Namina Forna
Inspired by the culture of West Africa, this feminist fantasy debut traces the experiences of an intuitive girl who is invited to leave her discriminatory village to join the emperor’s army of near-immortal women warriors.

2. The Haunting of Tram Car 015 by P. Djèlí Clark
Cairo, 1912. The case started simply enough for the Ministry of Alchemy, Enchantments, and Supernatural Entities: handle a possessed tram car. Soon, however, Agent Hamed Nasr and his new partner, Agent Onsi Youssef, are exposed to another side of Cairo stirring with suffragettes, secret societies, and sentient automatons. It’s a race against time to protect the city from an encroaching danger that crosses the line between the magical and mundane.

3. How Long ’til Black Future Month?: Stories by N.K. Jeminsin
In these stories, Jemisin sharply examines modern society, infusing magic into the mundane, and drawing deft parallels in the fantasy realms of her imagination. Dragons and hateful spirits haunt the flooded streets of New Orleans in the aftermath of Hurricane Katrina. In a parallel universe, a Utopian society watches our world, trying to learn from our mistakes. A Black mother in the Jim Crow South must save her daughter from a fey offering impossible promises. And in the Hugo award-nominated short story “The City Born Great,” a young street kid fights to give birth to an old metropolis’s soul.

4. Legendborn by Tracy Deonn
After her mother dies in an accident, Bree Matthews wants nothing to do with her family memories or childhood home. A residential program for bright high schoolers at UNC-Chapel Hill seems like the perfect escape– until Bree witnesses a magical attack on her very first night on campus. A young mage who calls himself a ‘Merlin’ attempts– and fails– to wipe Bree’s memory of everything she saw. His failure unlocks Bree’s own unique magic and a buried memory with a hidden connection: the night her mother died, another Merlin was at the hospital. Now she’ll do whatever it takes to find out the truth, even if that means infiltrating the Legendborn as one of their initiates.

5. Parable of the Sower by Octavia E. Butler
In 2025 California, an eighteen-year-old African American woman, suffering from a hereditary trait that causes her to feel others’ pain as well as her own, flees northward from her small community and its desperate savages.

6. A Phoenix First Must Burn: Sixteen Stories of Black Girl Magic, Resistance, and Hope edited by Patrice Caldwell
Sixteen tales by bestselling and award-winning authors that explore the Black experience through fantasy, science fiction, and magic. These authors, who are truly Octavia Butler’s heirs, have woven worlds to create a stunning narrative that centers Black women and gender nonconforming individuals.

7. The Unbroken by C.L. Clark
Touraine is a soldier. Stolen as a child and raised to kill and die for the empire, her only loyalty is to her fellow conscripts. But now, her company has been sent back to her homeland to stop a rebellion, and the ties of blood may be stronger than she thought. Luca needs a turncoat. Someone desperate enough to tiptoe the bayonet’s edge between treason and orders. Someone who can sway the rebels toward peace, while Luca focuses on what really matters: getting her uncle off her throne. Through assassinations and massacres, in bedrooms and war rooms, Touraine and Luca will haggle over the price of a nation. But some things aren’t for sale.

8. The Underground Railroad by Colson Whitehead
Cora is a slave on a cotton plantation in Georgia. An outcast even among her fellow Africans, she is on the cusp of womanhood—where greater pain awaits. And so when Caesar, a slave who has recently arrived from Virginia, urges her to join him on the Underground Railroad, she seizes the opportunity and escapes with him. In Colson Whitehead’s ingenious conception, the Underground Railroad is no mere metaphor: engineers and conductors operate a secret network of actual tracks and tunnels beneath the Southern soil. Cora embarks on a harrowing flight from one state to the next, encountering, like Gulliver, strange yet familiar iterations of her own world at each stop.

9. Who Fears Death by Nnedi Okorafor
Born into post-apocalyptic Africa to a mother who was raped after the slaughter of her entire tribe, Onyesonwu is tutored by a shaman and discovers that her magical destiny is to end the genocide of her people.

10. Witchmark by C.L. Polk
In an original world reminiscent of Edwardian England in the shadow of a World War, cabals of noble families use their unique magical gifts to control the fates of nations, while one young man seeks only to live a life of his own. Magic marked Miles Singer for suffering the day he was born, so he went to war to escape his destiny. The war leaves men changed, strangers to their friends and family, but even after reinventing himself as a doctor, Miles can’t hide what he truly is. When a fatally poisoned patient exposes Miles’ healing gift and his witchmark, he must put his anonymity and freedom at risk to investigate his patient’s murder. To find the truth he’ll need to rely on the family he despises, and on the kindness of the most gorgeous man he’s ever seen.