Times are tough, and sometimes you need to escape the real world for awhile by reading a good book. Whether you are laughing, learning something fascinating, visiting another world, experiencing new love, or being inspired by someone else’s life – reading can help you feel better. Perpich librarian, Anne Dennison, makes a few suggestions of books that will do just that. 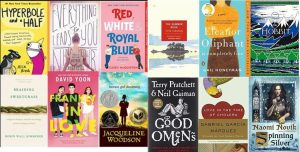 1. Braiding Sweetgrass: Indigenous Wisdom, Scientific Knowledge, and the Teachings of Plants by Robin Wall Kimmerer
An inspired weaving of indigenous knowledge, plant science, and personal narrative from a distinguished professor of science and a Native American.

2. Brown Girl Dreaming by Jacqueline Woodson
In mesmerizing verse, the author shares what it was like to grow up as an African American in the 1960s and 1970s, living with the remnants of Jim Crow and her growing awareness of the Civil Rights movement.

3. Eleanor Oliphant Is Completely Fine by Gail Honeyman
The story of an out-of-the-ordinary heroine whose deadpan weirdness and unconscious wit make for an irresistible journey as she realizes the only way to survive is to open your heart.

4. Everything Leads to You by Nina LaCour
When Emi and her best friend, Charlotte, discover a mysterious letter at the estate sale of a Hollywood film legend, she must move beyond the walls of her carefully crafted world to chase down the loose ends of a movie icon’s hidden life, leading her to uncover a decades’ old secret and the potential for something truly epic: love.

5. Frankly in Love by David Yoon
High school senior Frank Li takes a risk to go after a girl his parents would never approve of, but his plans will leave him wondering if he ever really understood love–or himself–at all.

6. Good Omens by Terry Pratchett & Neil Gaiman
The world is ending Saturday and everything is going to plan, except a somewhat fussy angel and a fast-living demon—both of whom have lived amongst Earth’s mortals since The Beginning and have grown rather fond of the lifestyle—are not actually looking forward to the coming Rapture. And someone seems to have misplaced the Antichrist…

7. The Hobbit; or, There and Back Again by J.R.R. Tolkien
Bilbo Baggins, a respectable, well-to-do hobbit, lives comfortably in his hobbit-hole until the day the wandering wizard Gandalf chooses him to take part in an adventure from which he may never return.

8. Hyperbole and a Half: Unfortunate Situations, Flawed Coping Mechanisms, Mayhem, and Other Things That Happened by Allie Brosh
Brief vignettes and comic (in both senses of the word) drawings about Brosh’s young life. Hilarious, touching, and guaranteed to make you laugh.

9. Love in the the Time of Cholera by Gabriel García Márquez
A masterly evocation of an unrequited passion so strong that it binds two people’s lives together for more than half a century.

10. Red, White & Royal Blue by Casey McQuiston
In this fun and romantic novel, find out what happens when America’s First Son falls in love with the Prince of Wales.

11. Spinning Silver by Naomi Novik
An imaginative retelling of the Rumpelstiltskin fairy tale that draws readers deeper into the glittering realm of fantasy, where the boundary between wonder and terror is thinner than a breath, and safety can be stolen as quickly as a kiss.

12. The Summer Book by Tove Jansson
This brief novel distills the essence of the summer—its sunlight and storms—into twenty-two crystalline vignettes. It tells the story of Sophia, a six-year-old girl awakening to existence, and Sophia’s grandmother, nearing the end of hers, as they spend the summer on a tiny unspoiled island in the Gulf of Finland. By the author of the Moomintroll books.