It’s graduation season and many high school seniors will be starting college next fall. This is a list of young adult novels and graphic novels set directly before, during, or after the first year of college. These titles highlight some of the challenges students might face at this time in their lives, except maybe the power to control squirrels.

All items on this list, curated by our Perpich librarian, Anne Dennison, are available at the Perpich Library. Click on titles for more information. 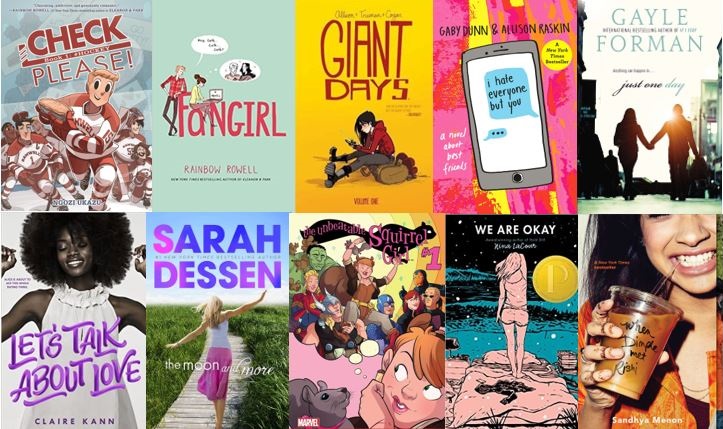 1. Check, Please! Book 1: #Hockey by Ngozi Ukazu
Eric Bittle may be a former junior figure skating champion, vlogger extraordinaire, and very talented amateur pâtissier, but being a freshman on the Samwell University hockey team is a whole new challenge. It is nothing like co-ed club hockey back in Georgia! And then, there is Jack – his very attractive but moody captain. Book 1 of 2. (Graphic Novel – also available online as a webcomic)

2. Fangirl by Rainbow Rowell
Being consummate fans of the Simon Snow series helped Cath and her twin sister, Wren, cope as little girls whose mother left them, but now, as they start college but not as roommates, Cath fears she is unready to live without Wren holding her hand – and without her passion for Snow. (Novel)

3. Giant Days, Vol. 1 by John Allison
Susan, Esther, and Daisy started at university three weeks ago and became fast friends. Now, away from home for the first time, all three want to reinvent themselves. But in the face of hand-wringing boys, “personal experimentation,” influenza, mystery-mold, nu-chauvinism, and the willful, unwanted intrusion of “academia,” they may be lucky just to make it to spring alive. Book 1 of 14+ (Graphic Novel)

4. I Hate Everyone But You by Gaby Dunn and Allison Raskin
A series of texts and emails sent between two best friends, Ava and Gen, as they head off to their first semesters of college on opposite sides of the country. From first loves to weird roommates, heartbreak, self-discovery, coming out and mental health, the two of them document every wild and awkward moment to each other. But as each changes and grows into her new life, will their friendship be able to survive the distance? (Novel)

5. Just One Day by Gayle Forman
Allyson Healey’s life is exactly like her suitcase – packed, planned, ordered. Then on the last day of her three-week post-graduation European tour, she meets Willem. A free-spirited, roving actor, Willem is everything she’s not, and when he invites her to abandon her plans and come to Paris with him, Allyson says yes. This uncharacteristic decision leads to a day of risk and romance, liberation and intimacy: 24 hours that will transform Allyson’s life. (Novel)

6. Let’s Talk About Love by Claire Kann
Alice had her whole summer planned. Nonstop all-you-can-eat buffets while marathoning her favorite TV shows (best friends totally included) with the smallest dash of adulting – working at the library to pay her share of the rent. The only thing missing from her perfect plan? Her girlfriend (who ended things when Alice confessed she’s asexual). Alice is done with dating. But then Alice meets Takumi and she can’t stop thinking about him or the rom com-grade romance feels she did not ask for. When her blissful summer takes an unexpected turn, Alice has to decide if she’s willing to risk their friendship for a love that might not be reciprocated – or understood. (Novel)

7. The Moon and More by Sarah Dessen
Luke is the perfect boyfriend: handsome, kind, fun. He and Emaline have been together all through high school in Colby, the beach town where they both grew up. But now, in the summer before college, Emaline wonders if perfect is good enough. Enter Theo, a super-ambitious outsider, a New Yorker assisting on a documentary film about a reclusive local artist. Theo’s sophisticated, exciting, and, best of all, he thinks Emaline is much too smart for Colby. (Novel)

8. The Unbeatable Squirrel Girl, Vol. 1: Squirrel Power by Ryan North, et al.
The nuttiest and most upbeat super hero in the world is starting college! And as if meeting her new roommate and getting to class on time isn’t hard enough, now she has to deal with Kraven the Hunter, too? At least her squirrel friend Tippy-Toe is on hand to help out. But what can one girl, and one squirrel, do when a hungry Galactus heads toward Earth? You’d be surprised! With time running out and Iron Man lending a helping hand (sort of), who will win in the battle between the Power Cosmic and the Power Chestnut? (Graphic Novel)

9. We Are Okay by Nina LaCour
Marin hasn’t spoken to anyone from her old life since the day she left everything behind. No one knows the truth about those final weeks. Not even her best friend, Mabel. But even thousands of miles away from the California coast, at college in New York, Marin still feels the pull of the life and tragedy she’s tried to outrun. Now, months later, alone in an emptied dorm for winter break, Marin waits. Mabel is coming to visit, and Marin will be forced to face everything that’s been left unsaid and finally confront the loneliness that has made a home in her heart. (Novel)

10. When Dimple Met Rishi by Sandhya Menon
Dimple Shah has it all figured out. With graduation behind her, she’s more than ready for a break from her family – and from Mamma’s inexplicable obsession with her finding the “Ideal Indian Husband.” Ugh. Rishi Patel is a hopeless romantic. So when his parents tell him that his future wife will be attending the same summer program – wherein he’ll have to woo her – he’s totally on board. Dimple and Rishi may think they have each other figured out. But when opposites clash, love works hard to prove itself in the most unexpected ways. (Novel)