This October, we are getting witchy with our book display in the library. Here are just a few of the witch-centered novels on display ranging from magical and fun to creepy and disturbing. All items on this list are available at the Perpich library. Click on titles for more information. 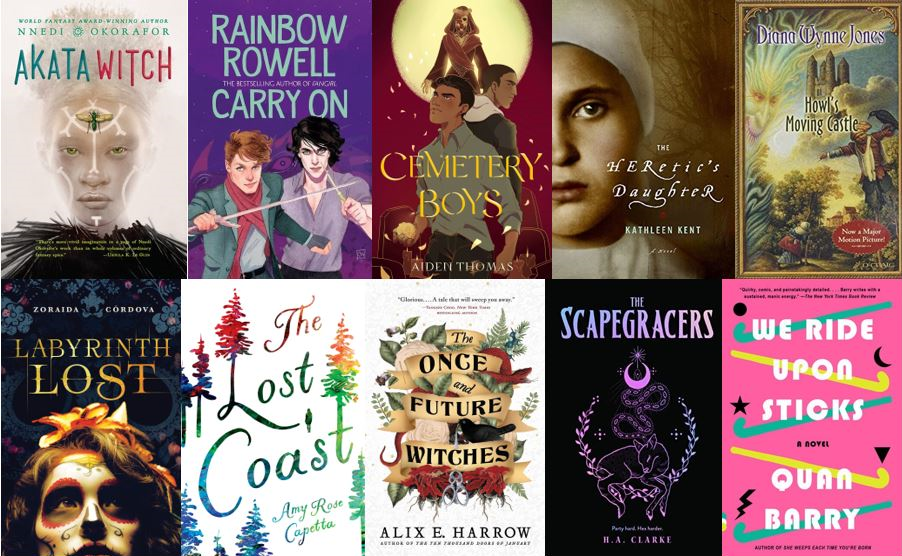 1. Akata Witch by Nnedi Okorafor
Twelve-year-old Sunny lives in Nigeria, but she was born American. Her features are African, but she has albinism. She’s a terrific athlete but can’t go out into the sun to play soccer. There seems to be no place where she fits in. And then she discovers something amazing – she is a “free agent” with latent mystical power. Soon she’s part of a quartet of students studying the visible and invisible, learning to change reality. But will it be enough to help them when they are asked to catch a career criminal well-versed in powerful juju?

2. Carry On by Rainbow Rowell
Simon Snow is the worst Chosen One who’s ever been chosen. That’s what his roommate, Baz, says. And Baz might be evil and a vampire and a complete git, but he’s probably right. Half the time, Simon can’t even make his wand work, and the other half, he starts something on fire. His mentor’s avoiding him, his girlfriend broke up with him, and there’s a magic-eating monster running around, wearing Simon’s face. Baz would be having a field day with all this, if he were here – it’s their last year at the Watford School of Magicks, and Simon’s infuriating nemesis didn’t even bother to show up.

3. Cemetery Boys by Aiden Thomas
When his traditional Latinx family has problems accepting his true gender, Yadriel becomes determined to prove himself a real brujo. With the help of his cousin and best friend Maritza, he performs the ritual himself, and then sets out to find the ghost of his murdered cousin and set it free. However, the ghost he summons is actually Julian Diaz, the school’s resident bad boy, and Julian is not about to go quietly into death. He’s determined to find out what happened and tie off some loose ends before he leaves. Left with no choice, Yadriel agrees to help Julian, so that they can both get what they want. But the longer Yadriel spends with Julian, the less he wants to let him leave.

4. The Heretic’s Daughter by Kathleen Kent
Salem, 1752. Sarah Carrier Chapman, weak with infirmity, writes a letter to her granddaughter that reveals the secret she has closely guarded for six decades: how she survived the Salem Witch Trials when her mother did not. Sarah’s story begins more than a year before the trials, when she and her family arrive in a New England community already gripped by superstition and fear. As they witness neighbor pitted against neighbor, friend against friend, the hysteria escalates — until more than two hundred men, women, and children have been swept into prison. Among them is Sarah’s mother, Martha Carrier. In an attempt to protect her children, Martha asks Sarah to commit an act of heresy — a lie that will most surely condemn Martha even as it will save her daughter.

5. Howl’s Moving Castle by Diana Wynne Jones
Sophie has the great misfortune of being the eldest of three daughters, destined to fail miserably should she ever leave home to seek her fate. But when she unwittingly attracts the ire of the Witch of the Waste, Sophie finds herself under a horrid spell that transforms her into an old lady. Her only chance at breaking it lies in the ever-moving castle in the hills: the Wizard Howl’s castle. To untangle the enchantment, Sophie must handle the heartless Howl, strike a bargain with a fire demon, and meet the Witch of the Waste head-on. Along the way, she discovers that there’s far more to Howl—and herself—than first meets the eye.

6. Labyrinth Lost by Zoraida Córdova
Alex is a bruja and the most powerful witch in her family. But she’s hated magic ever since it made her father disappear into thin air. So while most girls celebrate their Quinceañera, Alex prepares for her Deathday―the most important day in a bruja’s life and her only opportunity to rid herself of magic. But the curse she performs during the ceremony backfires, and her family vanishes, forcing Alex to absorb all of the magic from her family line. Left alone, Alex seeks help from Nova, a brujo with ambitions of his own. To get her family back they must travel to Los Lagos, a land in-between, as dark as Limbo and as strange as Wonderland. And while she’s there, what she discovers about herself, her powers, and her family, will change everything…

7. The Lost Coast by A.R. Capetta
Danny didn’t know what she was looking for when she and her mother spread out a map of the United States and Danny put her finger down on Tempest, California. What she finds are the Grays: a group of friends who throw around terms like queer and witch like they’re ordinary and everyday, though they feel like an earthquake to Danny. But Danny didn’t just find the Grays. They cast a spell that calls her halfway across the country, because she has something they need: She can bring back Imogen, the most powerful of the Grays, missing since the summer night she wandered into the woods alone. But before Danny can find Imogen, she finds a dead boy with a redwood branch through his heart. Something is very wrong amid the trees and fog of the Lost Coast, and whatever it is, it can kill.

8. The Once and Future Witches by Alex E. Harrow
In 1893, there’s no such thing as witches. There used to be, in the wild, dark days before the burnings began, but now witching is nothing but tidy charms and nursery rhymes. If the modern woman wants any measure of power, she must find it at the ballot box. But when the Eastwood sisters―James Juniper, Agnes Amaranth, and Beatrice Belladonna―join the suffragists of New Salem, they begin to pursue the forgotten words and ways that might turn the women’s movement into the witch’s movement. Stalked by shadows and sickness, hunted by forces who will not suffer a witch to vote―and perhaps not even to live―the sisters will need to delve into the oldest magics, draw new alliances, and heal the bond between them if they want to survive.

9. The Scapegracers by H.A. Clarke
Skulking near the bottom of West High’s social pyramid, Sideways Pike lurks under the bleachers doing magic tricks for Coke bottles. As a witch, lesbian, and lifelong outsider, she’s had a hard time making friends. But when the three most popular girls pay her $40 to cast a spell at their Halloween party, Sideways gets swept into a new clique. The unholy trinity are dangerous angels, sugar-coated rattlesnakes, and now – unbelievably – Sideways’ best friends.

10. We Ride Upon Sticks by Quan Barry
In the town of Danvers, Massachusetts, home of the original 1692 witch trials, the 1989 Danvers Falcons will do anything to make it to the state finals—even if it means tapping into some devilishly dark powers. Against a background of irresistible 1980s iconography, Quan Barry expertly weaves together the individual and collective progress of this enchanted team as they storm their way through an unforgettable season.