November is Native American Heritage Month when we honor the rich and diverse cultures, traditions, histories, and continuing contributions of Native peoples. 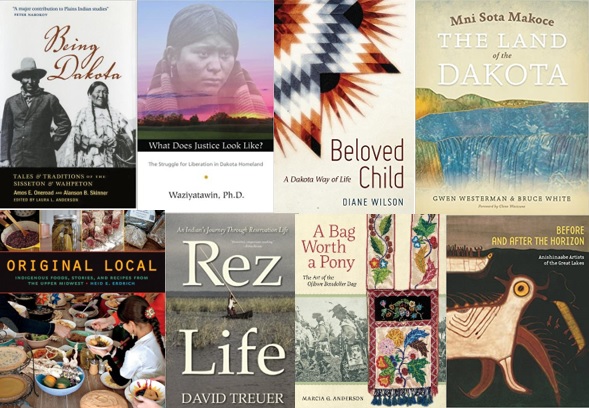 1. A Bag Worth a Pony: The Art of the Ojibwe Bandolier Bag by Marcia G. Anderson
Bandolier bags, or gashkibidaaganag – the large, heavily beaded shoulder bags made and worn by several North American Indian tribes around the Great Lakes – are prized cultural icons here and around the world. From the 1870s to the present day, Ojibwe bead artists of Minnesota have been especially well known for their lively, creative designs. Neighboring Dakota people would trade a pony for a beautiful beaded bag.

2. Before and After the Horizon: Anishinaabe Artists of the Great Lakes by David W. Penney & Gerald McMaster
This companion volume to an exhibition at the National Museum of the American Indian in New York reveals how Anishinaabe (also known in the United States as Ojibwe or Chippewa) artists have expressed the deeply rooted spiritual and social dimensions of their relations with the Great Lakes region. Featuring 70 color images of visually powerful historical and contemporary works, Before and After the Horizon is the only book to consider the work of Anishinaabe artists overall and to discuss 500 years of Anishinaabe art history.

3. Being Dakota: Tales and Traditions of the Sisseton and Wahpeton by Amos E. Oneroad & Alanson B. Skinner, edited by Laura L. Anderson
A unique collection detailing the customs, traditions, and folklore of the Sisseton-Wahpeton Dakota at the turn of the twentieth century, with descriptions of tribal organization, ceremonies that marked the individual’s passage from birth to death, and material culture.

4. Beloved Child: A Dakota Way of Life by Diane Wilson
Among the Dakota, the Beloved Child ceremony marked the special, tender affection that parents felt toward a child whose life had been threatened. In this moving book, author Diane Wilson explores the work of several modern Dakota people who are continuing to raise beloved children.

5. Mni Sota Makoce: The Land of the Dakota by Gwen Westerman & Bruce White
Drawing on oral history interviews, archival work, and painstaking comparisons of Dakota, French, and English sources, Mni Sota Makoce tells the detailed history of the Dakota people in their traditional homelands for at least hundreds of years prior to exile.

6. Original Local: Indigenous Foods, Stories, and Recipes from the Upper Midwest by Heid E. Erdrich
Local foods have garnered much attention in recent years, but the concept is hardly new: indigenous peoples have always made the most of nature’s gifts. Their menus were truly the “original local,” celebrated here in 135 home-tested recipes paired with stories from tribal activists, food researchers, families, and chefs.

7. Rez Life: An Indian’s Journey Through Reservation Life by David Treuer
In his first full-length work of nonfiction, Treuer brings a novelist’s storytelling skill and an eye for detail to a complex and subtle examination of Native American reservation life, past and present.

8. What Does Justice Look Like?: The Struggle for Liberation in Dakota Homeland by Waziyatawin
During the past 150 years, the majority of Minnesotans have not acknowledged the immense and ongoing harms suffered by the Dakota people ever since their homelands were invaded over 200 years ago. Many Dakota people say that the wounds incurred have never healed, and it is clear that the injustices: genocide, ethnic cleansing, mass executions, death marches, broken treaties, and land theft; have not been made right. The Dakota people paid and continue to pay the ultimate price for Minnesota’s statehood.