Hopeful Nonfiction for the New Year

With the start of a new year comes hope: hope for a better future, hope for a better world, and hope for a better life – this year more than ever. Hope gets us through tough circumstances, giving us the courage to keep going. Sometimes hope is difficult to sustain because it doesn’t always come to fruition. Reading inspiring true stories, where people prevail over their harrowing experiences and circumstances, often helps us to keep our own hope alive. Here is a list of books that will do just that, curated by our Perpich librarian, Anne Dennison. The items listed below are available at the Perpich Library. 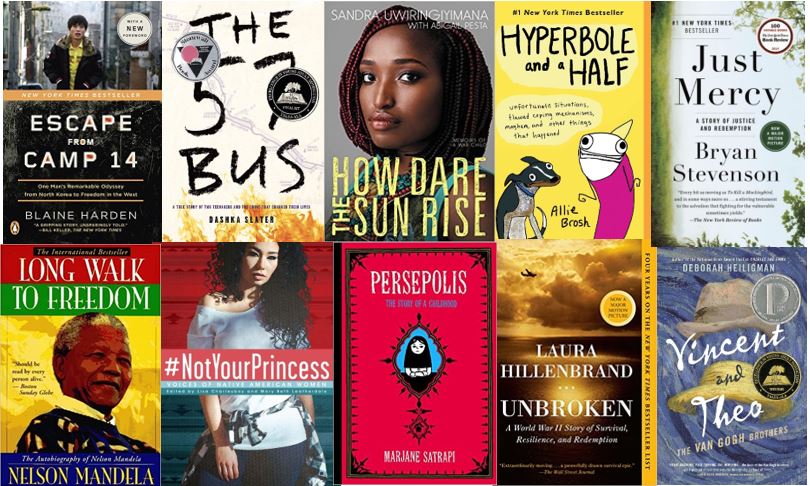 1. Escape from Camp 14: One Man’s Remarkable Odyssey from North Korea to Freedom in the West by Blaine Harden
Acclaimed journalist Blaine Harden tells the story of Shin Dong-hyuk, one of the few people born in a North Korean political prison to have escaped and survived. Through Harden’s harrowing narrative of Shin’s life and remarkable escape, he offers an unequaled inside account of one of the world’s darkest nations and a riveting tale of endurance, courage, and survival.

2. The 57 Bus: A True Story of Two Teenagers and the Crime That Changed Their Lives by Dashka Slater
Sasha, a white teen, lived in the middle-class foothills and attended a small private school. Richard, a black teen, lived in the crime-plagued flatlands and attended a large public school. Each day, their paths overlapped for a mere eight minutes. But one afternoon on the bus ride home from school, a single reckless act left Sasha severely burned, and Richard charged with two hate crimes and facing life imprisonment.

3. How Dare the Sun Rise: Memoirs of a War Child by Sandra Uwiringiyimana, Abigail Pesta
In this powerful memoir, Sandra Uwiringyimana, a girl from the Democratic Republic of the Congo, tells the incredible true story of how she survived a massacre, immigrated to America, and overcame her trauma through art and activism.

4. Hyperbole and a Half: Unfortunate Situations, Flawed Coping Mechanisms, Mayhem, and Other Things That Happened by Allie Brosh
“Autobiographical cartoonist Allie Brosh impresses with this confessional collection of essays, adapted in part from her popular blog of the same name. Most pieces deal with Brosh’s struggle with depression, an experience rarely expressed so clearly and specifically in other media as it is here. Even those unfamiliar with trials of such a condition will find this humorous depiction enlightening.” Publisher’s Weekly

5. Just Mercy: A Story of Justice and Redemption by Bryan Stevenson
An unforgettable true story about the potential for mercy to redeem us, and a clarion call to end mass incarceration in America — from one of the most inspiring lawyers of our time. Bryan Stevenson was a young lawyer when he founded the Equal Justice Initiative, a nonprofit law office in Montgomery, Alabama, dedicated to defending the poor, the incarcerated, and the wrongly condemned.

6. Long Walk to Freedom: The Autobiography of Nelson Mandela by Nelson Mandela
Nelson Mandela is one of the great moral and political leaders of our time: an international hero whose lifelong dedication to the fight against racial oppression in South Africa won him the Nobel Peace Prize and the presidency of his country. The book profiles his early life, coming of age, education, and 27 years in prison.

7. #Notyourprincess: Voices of Native American Women by Lisa Charleyboy and Mary Beth Leatherdale, editors
Whether looking back to a troubled past or welcoming a hopeful future, the powerful voices of Indigenous women across North America resound in this book. An eclectic collection of poems, essays, interviews, and art that combine to express the experience of being a Native woman. Stories of abuse, humiliation, and stereotyping are countered by the voices of passionate women making themselves heard and demanding change.

8. Persepolis (#1-4) by Marjane Satrapi
The story of Satrapi’s unforgettable childhood and coming of age within a large and loving family in Tehran during the Islamic Revolution; of the contradictions between private life and public life in a country plagued by political upheaval; of her high school years in Vienna facing the trials of adolescence far from her family; of her homecoming–both sweet and terrible; and, finally, of her self-imposed exile from her beloved homeland.

9. Unbroken: A World War II Story of Survival, Resilience and Redemption by Laura Hillenbrand
On a May afternoon in 1943, an Army Air Forces bomber crashed into the Pacific Ocean and disappeared, leaving only a spray of debris and a slick of oil, gasoline, and blood. Then, on the ocean surface, a face appeared. It was that of a young lieutenant, the plane’s bombardier, Louis Zamperini, who was struggling to a life raft and pulling himself aboard. So began one of the most extraordinary odysseys of the Second World War. Driven to the limits of endurance, Zamperini would answer desperation with ingenuity; suffering with hope, resolve, and humor; brutality with rebellion.

10. Vincent and Theo: The Van Gogh Brothers by Deborah Heiligman
The deep and enduring friendship between Vincent and Theo Van Gogh shaped both brothers’ lives. Confidant, champion, sympathizer, friend, Theo supported Vincent as he struggled to find his path in life. They shared everything, swapping stories of lovers and friends, successes and disappointments, dreams and ambitions. Meticulously researched, drawing on the 658 letters Vincent wrote to Theo during his lifetime, Deborah Heiligman weaves a tale of two lives intertwined and the love of the Van Gogh brothers.