It’s that time of year again, when many of us crave to read something scary to go along with the spooky feel of the season.

Below is a list of unsettling horror novels to curl up with on a cool, fall afternoon. Better not read them at night though… 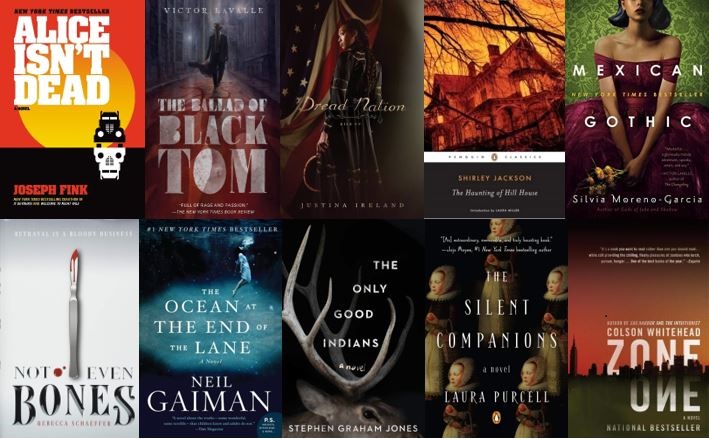 1. Alice Isn’t Dead by Joseph Fink
Keisha Taylor lived a quiet life with her wife, Alice, until the day that Alice disappeared. After months of searching, presuming she was dead, Keisha held a funeral, mourned, and gradually tried to get on with her life. But that was before Keisha started to see her wife, again and again, in the background of news reports from all over America. Alice isn’t dead, and she is showing up at every major tragedy and accident in the country. Following a line of clues, Keisha takes a job with a trucking company, and begins searching for Alice. She eventually stumbles on an otherworldly conflict being waged in the quiet corners of our nation’s highway system – uncovering a conspiracy that goes way beyond one missing woman.

2. The Ballad of Black Tom by Victor Lavalle
People move to New York looking for magic and nothing will convince them it isn’t there. Charles Thomas Tester hustles to put food on the table, keep the roof over his father’s head, from Harlem to Flushing Meadows to Red Hook. He knows what magic a suit can cast, the invisibility a guitar case can provide, and the curse written on his skin that attracts the eye of wealthy white folks and their cops. But when he delivers an occult tome to a reclusive sorceress in the heart of Queens, Tom opens a door to a deeper realm of magic, and earns the attention of things best left sleeping. A storm that might swallow the world is building in Brooklyn. Will Black Tom live to see it break?

3. Dread Nation by Justina Ireland
Jane McKeene was born two days before the dead began to walk the battlefields of Gettysburg, Pennsylvania – derailing the War Between the States and changing the nation forever. In this new America, safety for all depends on the work of a few, and laws like the Native and Negro Education Act require certain children attend combat schools to learn to put down the dead. But there are also opportunities – and Jane is studying to become an Attendant, trained in both weaponry and etiquette to protect the well-to-do. It’s a chance for a better life for Black girls like Jane. But that’s not a life Jane wants. When families around Baltimore County begin to go missing, Jane is caught in the middle of a conspiracy, one that finds her in a desperate fight for her life against some powerful enemies. And the restless dead, it would seem, are the least of her problems.

4. The Haunting of Hill House by Shirley Jackson
The story of four seekers who arrive at a notoriously unfriendly pile called Hill House: Dr. Montague, an occult scholar looking for solid evidence of a “haunting”; Theodora, his lighthearted assistant; Eleanor, a friendless, fragile young woman well acquainted with poltergeists; and Luke, the future heir of Hill House. At first, their stay seems destined to be merely a spooky encounter with inexplicable phenomena. But Hill House is gathering its powers – and soon it will choose one of them to make its own.

5. Mexican Gothic by Silvia Moreno-Garcia
After receiving a frantic letter from her newly-wed cousin begging for someone to save her from a mysterious doom, Noemí Taboada heads to High Place, a distant house in the Mexican countryside. She’s not sure what she will find – her cousin’s husband, a handsome Englishman, is a stranger, and Noemí knows little about the region. Noemí is also an unlikely rescuer: she’s a glamorous debutante, and her chic gowns and perfect red lipstick are more suited for cocktail parties than amateur sleuthing. But she’s also tough and smart, with an indomitable will, and she is not afraid: not of her cousin’s new husband, who is both menacing and alluring; not of his father, the ancient patriarch who seems to be fascinated by Noemí; and not even of the house itself, which begins to invade Noemi’s dreams with visions of blood and doom.

6. Not Even Bones by Rebecca Schaeffer
Nita doesn’t murder supernatural beings and sell their body parts on the internet – her mother does that. Nita just dissects the bodies after they’ve been “acquired.” Until her mom brings home a live specimen and Nita decides she wants out; dissecting a scared teenage boy is a step too far. But when she decides to save her mother’s victim, she ends up sold in his place – because Nita herself isn’t exactly “human”. She has the ability to alter her biology, a talent that is priceless on the black market. Now on the other side of the bars, if she wants to escape, Nita must ask herself if she’s willing to become the worst kind of monster.

7. The Ocean at the End of the Lane by Neil Gaiman
It began for our narrator forty years ago when the family lodger stole their car and committed suicide in it, stirring up ancient powers best left undisturbed. Dark creatures from beyond the world are on the loose, and it will take everything our narrator has just to stay alive: there is primal horror here, and menace unleashed – within his family and from the forces that have gathered to destroy it. His only defense is three women, on a farm at the end of the lane. The youngest of them claims that her duck pond is ocean. The oldest can remember the Big Bang.

8. The Only Good Indians by Stephen Graham Jones
A novel that is equal parts psychological horror and cutting social commentary on identity politics and the American Indian experience. Fans of Jordan Peele and Tommy Orange will love this story as it follows the lives of four American Indian men and their families, all haunted by a disturbing, deadly event that took place in their youth. Years later, they find themselves tracked by an entity bent on revenge, totally helpless as the culture and traditions they left behind catch up to them in a violent, vengeful way.

9. The Silent Companions by Laura Purcell
When newly widowed Elsie is sent to see out her pregnancy at her late husband’s crumbling country estate, The Bridge, what greets her is far from the life of wealth and privilege she was expecting. With her husband dead just weeks after their marriage, her new servants resentful, and the local villagers actively hostile, Elsie has only her husband’s awkward cousin for company. Or so she thinks. Inside her new home lies a locked door, beyond which is a painted wooden figure – a silent companion – that bears a striking resemblance to Elsie herself. The residents of The Bridge are terrified of the figure, but Elsie tries to shrug this off as simple superstition – that is, until she notices the figure’s eyes following her. A Victorian ghost story that evokes a most unsettling kind of fear, this is a tale that creeps its way through the consciousness in ways you least expect – much like the silent companions themselves.

10. Zone One by Colson Whitehead
In this wry take on the post-apocalyptic horror novel, a pandemic has devastated the planet. The plague has sorted humanity into two types: the uninfected and the infected, the living and the living dead. Now the plague is receding, and Americans are busy rebuilding civilization under orders from the provisional government based in Buffalo. Their top mission: the resettlement of Manhattan. Mark Spitz is a member of one of the civilian teams working in lower Manhattan. Alternating between flashbacks of Spitz’s desperate fight for survival during the worst of the outbreak and his present narrative, the novel unfolds over three surreal days, as it depicts the mundane mission of straggler removal, the rigors of Post-Apocalyptic Stress Disorder, and the impossible job of coming to grips with the fallen world. And then things start to go wrong.