In Memoriam from Perpich Library

Every year it is important to take a moment and remember those who have left us, reflecting on their lasting legacy on our world. These are just a few of the many artists, musicians, writers, and actors who died in 2022 who were a part of that legacy. 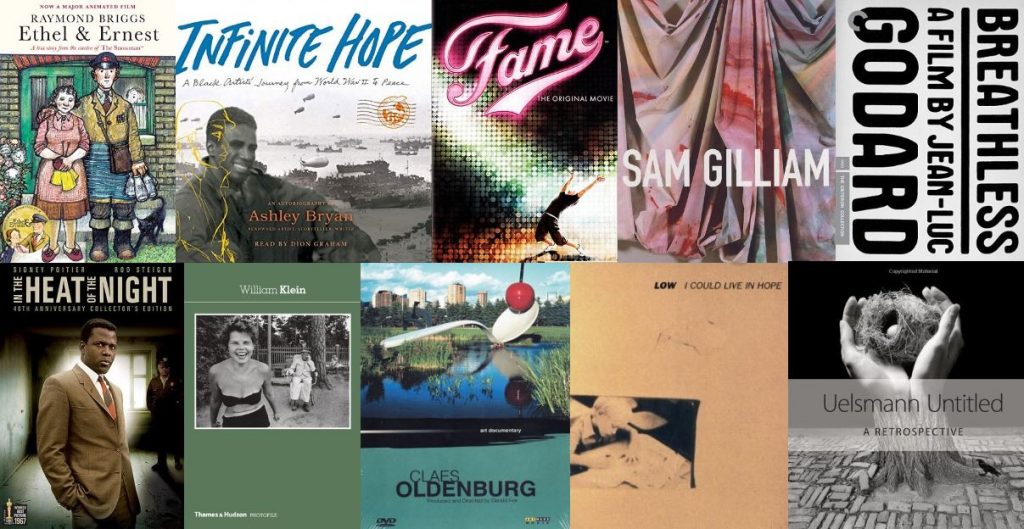 1. Raymond Briggs (1934-2022)
“An English illustrator, cartoonist, graphic novelist and author. Achieving critical and popular success among adults and children, he is best known in Britain for his 1978 story The Snowman a book without words whose cartoon adaptation is televised and whose musical adaptation is staged every Christmas.” – Wikipedia

Ethel & Ernest by Raymond Briggs (graphic novel)
Raymond Briggs’s loving depiction of his parents’ lives from their chance first encounter until their deaths in the 1970s. They met during the Depression–she working as a maid, he as a milkman–and we follow them as they court and marry, make a home, raise their son, and cope with the dark days of World War II.

2. Ashley Bryan (1923-2022)
“An American writer and illustrator of children’s books. Most of his subjects are from the African-American experience. He was U.S. nominee for the Hans Christian Andersen Award in 2006 and he won the Laura Ingalls Wilder Award for his contribution to American children’s literature in 2009. His picture book Freedom Over Me was short-listed for the 2016 Kirkus Prize and received a Newbery Honor.” – Wikipedia

Infinite Hope: A Black Artist’s Journey from World War II to Peace by Ashley Bryan (picture book memoir)
In May of 1942, at the age of eighteen, Ashley Bryan was drafted to fight in World War II. For the next three years, he would face the horrors of war as a black soldier in a segregated army. Filled with never-before-seen artwork and handwritten letters and diary entries, this illuminating and moving memoir by Newbery Honor-winning illustrator Ashley Bryan is both a lesson in history and a testament to hope.

3. Irene Cara (1959-2022)
“An American singer, songwriter, and actress who rose to prominence for her role as Coco Hernandez in the 1980 musical film Fame, and for recording the film’s title song “Fame”, which reached No. 1 in several countries.” – Wikipedia

Fame (feature film/DVD)
Follow the heartaches and triumphs of a group of talented students as they struggle to graduate from New York’s prestigious High School for the Performing Arts.

4. Sam Gilliam (1933-2022)
“An American color field painter and lyrical abstractionist artist. Gilliam was associated with the Washington Color School, a group of Washington, D.C.-area artists that developed a form of abstract art from color field painting in the 1950s and 1960s. His works have also been described as belonging to abstract expressionism and lyrical abstraction.” – Wikipedia

Sam Gilliam: A Retrospective by Jonathan P. Binstock (art book)
In this volume, Corcoran Gallery of Art Curator of Contemporary Art Jonathan P. Binstock explores four decades of work and establishes the artist’s place in the history of post-1960s art. Binstock’s wide-ranging and provocative inquiry into Gilliam’s groundbreaking achievements as a modernist and as an African American artist is supported with a wealth of beautifully produced illustrations, as well as an annotated and illustrated chronology and an exhaustive bibliography.

5. Jean-Luc Godard (1930-2022)
“A French-Swiss film director, screenwriter, and film critic. He rose to prominence as a pioneer of the French New Wave film movement of the 1960s, alongside such filmmakers as François Truffaut, Agnès Varda, Éric Rohmer, and Jacques Demy. He was arguably the most influential French filmmaker of the post-war era.” – Wikipedia

Breathless (À Bout de Souffle) (feature film/DVD)
A small-time criminal kills a police officer, setting in motion a tragic series of events for both himself and his American girlfriend. This is Jean-Luc Godard’s first feature film (1960) as a director and an important example of the French New Wave movement.

6. William Klein (1926-2022)
“An American-born French photographer and filmmaker noted for his ironic approach to both media and his extensive use of unusual photographic techniques in the context of photojournalism and fashion photography. He was ranked 25th on Professional Photographer’s list of 100 most influential photographers.” – Wikipedia

William Klein (photography book)
A painter, filmmaker, graphic designer and fashion photographer, Klein grew up in New York but was based in Paris since 1948. His shots were often intense and immediate, disrupting the established order of things and capturing fragmented snatches of distortion and movement. Although best known for his images of New York in the 1950s, he also worked in other urban environments, including Tokyo and Moscow, as well as producing a striking series of painted contact sheets. This volume in the Photofile series assembles the experimental, unforgettable moments captured by William Klein in one accessible volume.

7. Claes Oldenburg (1929-2022)
“A Swedish-born American sculptor, best known for his public art installations typically featuring large replicas of everyday objects. Another theme in his work is soft sculpture versions of everyday objects. Many of his works were made in collaboration with his wife, Coosje van Bruggen, who died in 2009…In 1988, the two created the iconic Spoonbridge and Cherry sculpture for the Walker Art Center in Minneapolis. It remains a staple of the Minneapolis Sculpture Garden as well as a classic image of the city.” – Wikipedia

Claes Oldenburg (documentary/DVD)
Huge hamburgers and soft toilets – with alien replicas of the consumer world and environments, Claes Oldenburg became a key figure of pop art. Today, his landscape art and monumental sculptures are modern monuments that made the American object artist known far beyond the art scene. Gerald Fox accompanied Oldenburg in 1995 when building one of these large projects and preparing his anthology retrospective at the Guggenheim Museum. Artists such as Roy Lichtenstein give insight into the world of a versatile artist who transformed everyday objects into sensual ironic works of art.

8. Mimi Parker (1967-2022)
An American drummer, vocalist and songwriter “whose haunting vocals and spare drumming helped define the moody, minimalist sound of Low, a trio that emerged from the 1990s alt-rock world and endured as an influential and acclaimed act for nearly 30 years.” – New York Times

I Could Live in Hope (music CD)
The debut studio album by American indie rock band Low (based out of Duluth, Minnesota) formed in 1993 by Alan Sparhawk (guitar and vocals) and Mimi Parker (drums and vocals). It was released on December 2, 1994, on Vernon Yard Recordings.

9. Sidney Poitier (1927-2022)
“A Bahamian and American actor, film director, and diplomat. In 1964, he was the first black actor and first Bahamian to win the Academy Award for Best Actor.[2] He received two competitive Golden Globe Awards, a competitive British Academy of Film and Television Arts award (BAFTA), and a Grammy Award for Best Spoken Word Album. Poitier was one of the last major stars from the Golden Age of Hollywood cinema.” – Wikipedia

In the Heat of the Night (feature film/DVD)
Virgil Tibbs is a renowned homicide detective from Philadelphia returning to Mississippi in the sweltering summer to visit his mother, when a rich factory owner is found dead. The industrialist was white, Tibbs is black and in the Deep South at the time, that is enough reason for the local cops to arrest him on suspicion of murder. After his identity and credentials are established, the Chief of Police lets Tibbs go and attempts to enlist his help in solving the case. An uneasy and complicated relationship develops between the southern Sheriff and the city slicker. Sidney Poitier stars as the superior sleuth who rediscovers the small town racism he escaped through his education.

10. Jerry Uelsmann (1934-2022)
“An American photographer. As an emerging artist in the 1960s, Jerry Uelsmann received international recognition for surreal, enigmatic photographs (photomontages) made with his unique method of composite printing and his dedication to revealing the deepest emotions of the human condition. Over the next six decades, his contributions to contemporary photography were firmly established with important exhibitions, prestigious awards and numerous publications.” – Wikipedia

Uelsmann Untitled: A Retrospective by Jerry N. Uelsmann and Carol McCusker (photography book)
For more than five decades, Jerry Uelsmann has sought to transform photography, de-emphasizing its function as a form of documentation, liberating it as a medium capable of re-imagining the real. Widely known as one of the forefathers of the digitally manipulated image, his work has influenced and inspired a broad range of artists and photographers—even as he maintains his strict adherence to purely analog tools to explore  “the alchemy of the darkroom.” Uelsmann Untitled features the largest number of Uelsmann images ever collected in a single volume. Among them are some that have never before been published, several beloved favorites, and many rarely seen images.

All items on this list are available at the Perpich Library.