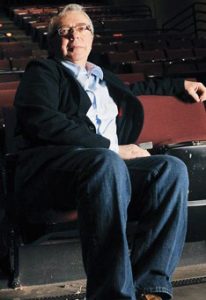 Jerry Girton, a theater educator and director with a wealth of experience both at Perpich Center and across the state, was honored with the Minnesota Educational Theater Association’s (META) Dedicated Lifetime Award at the Communication & Theater Association of Minnesota conference on September 18, 2021.

Michael Tillman, retired K-12 Arts Education teacher, submitted Girton’s nomination letter and also presented the award. He noted, “I have been proud to be Jerry Girton’s colleague during his teaching years at Walnut Grove High School, St. James High School, and Riverland Community College. He has been a highly respected and admired director, teacher, and speech/theatre judge throughout those years, and, even in retirement, he continues to serve us as the MSHSL One Act Play Rules Clinician! His encouragement of student actors – whether they were his own students or students he encouraged when he saw their work in contests – is remarkable and exemplary. His work with the League and with the Perpich Center for Arts Education has provided continuing theater education for theater teachers throughout the state, and he continues to supervise theatre student teachers preparing for licensure. I am delighted to recommend him for this award.”

In accepting the award, Girton commented that the inscription on his plaque will say, “Thank you, we enjoyed doing it for you!” and he shared the poignant story that led to the quote. “One of my performance protocols for my casts was that they were not to go to the lobby in costume to greet audience members. I always felt like it was asking for compliments. They were to get out of costume and make-up and could greet family or friends in the backstage hallway. I would listen in on some of the conversations and heard comments after they were congratulated. Most were self-deprecating. ‘Oh, but I messed up my lyrics!’ ‘Oh, but the timing was all off!’ ‘Oh, I screwed up the choreography!’ I told them that from now on, they should accept the compliments and just say, ‘Thank you, we enjoyed doing it for you!’ And that was the beginning…from that point on, whenever I would see a former student/actor in a show and compliment them, they would smile and say, ‘Thank you, we enjoyed doing it for you!'”