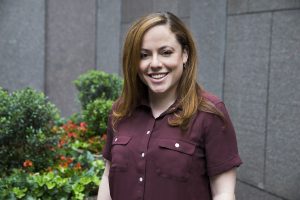 Jessica Johnson (Theater 1997) chatted about Broadway with Perpich students and Tory Peterson, Theater Instructor, on May 20, 2021. Johnson is a founding member and Senior Vice President of Polk & Co., a Broadway publicity agency, working alongside Matt Polk as a press agent for Roundabout Theatre Company since 2003. She has managed and contributed to over 200 publicity & marketing campaigns for Broadway musicals, plays, special projects, and film. Recent highlights include the Broadway productions of The Sound Inside starring Mary-Louise Parker; Kerry Washington’s return to Broadway in American Son; the Tony-nominated revival of Arthur Miller’s All My Sons starring Annette Bening and Tracy Letts; the international launch of Ahrens & Flaherty’s Anastasia the Musical; and the live TV event RENT Live. Previously at Boneau/Bryan-Brown for 10 years, she also managed the U.S. publicity campaigns for National Theatre Live (2009-2013); the Broadway production of One Man, Two Guvnors including James Corden’s Tony award-winning campaign; and the Royal Shakespeare Company’s NY residency. Jessica is a member of the Association of Theatrical Press Agents and Managers. She has a B.S. in Marketing Communications from Emerson College.

“It was really nice to be able to talk with Tory and his students,” said Johnson. “We went over what my job entails and some specifics of working in the Broadway space, as it pertains to union regulations and being in New York City. I explained the basics of what my responsibilities to a production are and how that relates to the artists involved, both on and off stage. I am hopeful it was interesting for the students to hear about off stage careers such as mine.”

Tory Peterson shared, “It was insightful listening to Jessica chat about Broadway and the struggles COVID-19 has created for theater & the arts in New York. It was wonderful hearing that producers are scheduling openings for the fall and that there may be some semblance of normalcy to the upcoming Broadway production year.”

Jessica grew up in West St. Paul, MN and attended Henry Sibley High School before Perpich. Attending Perpich was an experience that she wouldn’t trade for the world. “Perpich made me so happy. I learned so much and made lifelong friends,” said Johnson. “I learned about Perpich from a family friend who was in the FIRST [graduating] class. He was a brilliant visual artist and never truly ‘fit in’ in the suburb where we lived – and he was my hero. When I witnessed what he experienced at the school, I knew I wanted to be a part of that. Perpich absolutely changed my life. It validated in me something I couldn’t understand at a young age…that I wanted to be around creative people and to learn from teachers with big brains and open hearts. I devoured everything the school had to offer. And it definitely gave me the confidence to push myself further and leave Minnesota in search of an artistic, or artistic-adjacent, life. (Don’t get me wrong – I love Minnesota! But I needed to go explore.)” Johnson gave a special shoutout to few instructors that made an impact: Tory Peterson and Barbara Morin, Theater Instructors; João Bichinho, Social Studies Instructor. 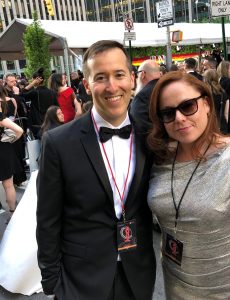 The pandemic has been particularly difficult for the worlds of Broadway and theater as a whole, impacting tens of thousands of theater workers in New York City. “My heart hurts for my colleagues on and off stage that were left with no work,” said Johnson. “In our firm, we had to furlough the majority of our staff. A small group of us remained on in a diminished capacity to oversee the projects that were suspended and to continue to work on the projects in the pipeline. Luckily, our producers used the down time to continue the planning work that goes into building a major stage production, so we were able to stay on. And as every month of the shutdown brought new questions and new information, we remained busy overseeing communications and media relations on behalf of our projects.” Jessica is most looking forward to the revival of Tony Kushner’s Caroline, or Change that had it’s opening canceled last March due to COVID. The show is now scheduled for opening on October 27th, 2021 at Studio 54.