Latinx Fiction Titles By and About Latinx People

September 15 – October 15 is National Hispanic Heritage Month! It’s a time for Americans to celebrate “the histories, cultures, and contributions of American citizens whose ancestors came from Spain, Mexico, the Caribbean, and Central and South America.” Reading fiction is a wonderful way to gain empathy and understanding about people who are different from yourself. Below is a list of Latinx* fiction titles by and about Latinx people available to check out at the Perpich Library.
*a gender neutral-term for a person of Latin American origin or descent 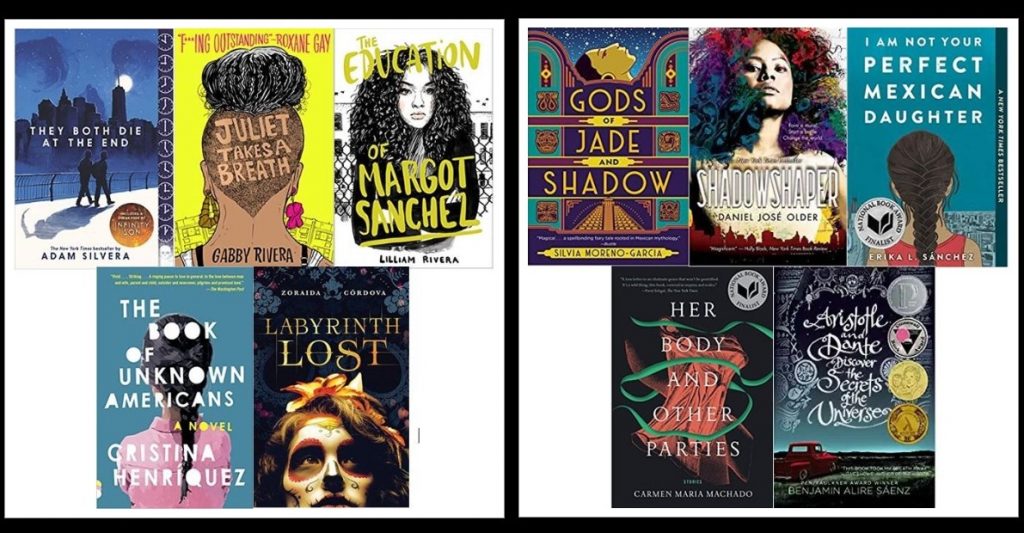 1. Aristotle and Dante Discover the Secrets of the Universe by Benjamin Alire Sáenz
Aristotle is an angry teen with a brother in prison. Dante is a know-it-all who has an unusual way of looking at the world. When the two meet at the swimming pool, they seem to have nothing in common. But as the loners start spending time together, they discover that they share a special friendship – the kind that changes lives and lasts a lifetime. And it is through this friendship that Ari and Dante will learn the most important truths about themselves and the kind of people they want to be.

2. The Book of Unknown Americans by Cristina Henríquez
Arturo and Alma Rivera have lived their whole lives in Mexico. One day, their beautiful fifteen-year-old daughter, Maribel, sustains a terrible injury, one that casts doubt on whether she’ll ever be the same. And so, leaving all they have behind, the Riveras come to America with a single dream: that in this country of great opportunity and resources, Maribel can get better.

3. The Education of Margot Sanchez by Lilliam Rivera
After “borrowing” her father’s credit card to finance a more stylish wardrobe, Margot Sanchez suddenly finds herself grounded. Margot’s invitation to the ultimate beach party is within reach and she has no intention of letting her family’s drama or Moises – the admittedly good looking but outspoken boy from the neighborhood – keep her from her goal.

4. Gods of Jade and Shadow by Silvia Moreno-Garcia
The Jazz Age is in full swing, but Casiopea Tun is too busy cleaning the floors of her wealthy grandfather’s house to listen to any fast tunes. Yet this new life seems as distant as the stars, until the day she finds a curious wooden box in her grandfather’s room. She opens it – and accidentally frees the spirit of the Mayan god of death, who requests her help in recovering his throne from his treacherous brother. In the company of the strangely alluring god and armed with her wits, Casiopea begins an adventure that will take her on a cross-country odyssey from the jungles of Yucatán to the bright lights of Mexico City – and deep into the darkness of the Mayan underworld.

5. Her Body and Other Parties by Carmen Maria Machado
In her short story collection, Machado blithely demolishes the arbitrary borders between psychological realism and science fiction, comedy and horror, fantasy and fabulism. While her work has earned her comparisons to Karen Russell and Kelly Link, she has a voice that is all her own. In this electric and provocative debut, Machado bends genre to shape startling narratives that map the realities of women’s lives and the violence visited upon their bodies.

7. Juliet Takes a Breath by Gabby Rivera
Juliet Milagros Palante is a self-proclaimed closeted Puerto Rican baby dyke from the Bronx. Only, she’s not so closeted anymore. Not after coming out to her family the night before flying to Portland, Oregon, to intern with her favorite feminist writer – what’s sure to be a life-changing experience. And when Juliet’s coming out crashes and burns, she’s not sure her mom will ever speak to her again.

8. Labyrinth Lost by Zoraida Córdova
Alex is a bruja, the most powerful witch in a generation…and she hates magic. At her Deathday celebration, Alex performs a spell to rid herself of her power. But it backfires. Her whole family vanishes into thin air, leaving her alone with Nova, a brujo boy she’s not sure she can trust, but who may be Alex’s only chance at saving her family.

9. Shadowshaper by Daniel José Older
Sierra Santiago planned an easy summer of making art and hanging out with her friends. But then a corpse crashes their first party. With the help of a fellow artist named Robbie, Sierra discovers shadowshaping, a magic that infuses ancestral spirits into paintings, music, and stories. But someone is killing the shadowshapers one by one. Now Sierra must unravel her family’s past, take down the killer in the present, and save the future of shadowshaping for generations to come.

10. They Both Die at the End by Adam Silvera
On September 5, a little after midnight, Death-Cast calls Mateo Torrez and Rufus Emeterio to give them some bad news: They’re going to die today. Mateo and Rufus are total strangers, but, for different reasons, they’re both looking to make a new friend on their End Day. The good news: there’s an app for that. It’s called the Last Friend, and through it, Rufus and Mateo are about to meet up for one last great adventure – to live a lifetime in a single day.