What better way to start out your summer than reading a book set in the summertime? These LGBTQ+ novels and graphic novels are guaranteed to get you in the mood for the carefree and sunny days that are coming. All items on this list are available at the Perpich library. Click on titles for more information. 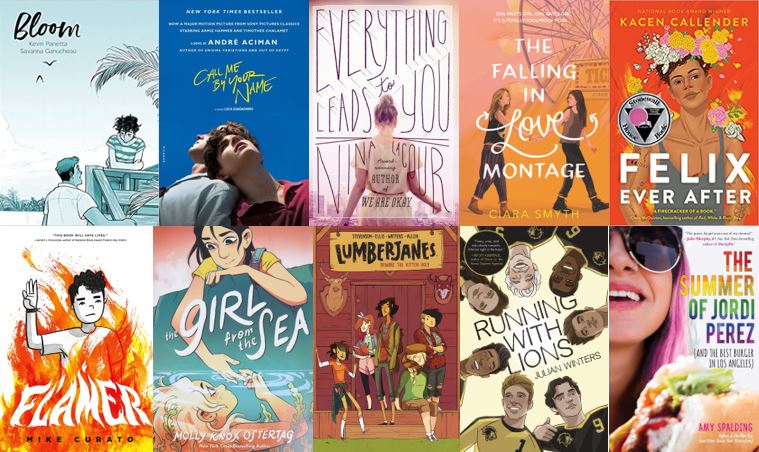 1. Bloom by Kevin Panetta (author) & Savanna Ganucheau (artist)
Now that high school is over, Ari is dying to move to the big city with his ultra-hip band―if he can just persuade his dad to let him quit his job at their struggling family bakery. Though he loved working there as a kid, Ari cannot fathom a life wasting away over rising dough and hot ovens. But while interviewing candidates for his replacement, Ari meets Hector, an easygoing guy who loves baking as much as Ari wants to escape it. As they become closer over batches of bread, love is ready to bloom…that is, if Ari doesn’t ruin everything. (Graphic Novel)

2. Call Me By Your Name by André Aciman
The story of a sudden and powerful romance that blossoms between an adolescent boy and a summer guest at his parents’ cliffside mansion on the Italian Riviera. Each is unprepared for the consequences of their attraction, when, during the restless summer weeks, unrelenting currents of obsession, fascination, and desire intensify their passion and test the charged ground between them. Recklessly, the two verge toward the one thing both fear they may never truly find again: total intimacy. (Novel)

3. Everything Leads To You by Nina Lacour
After being entrusted with her brother’s Los Angeles apartment for the summer as a graduation gift, Emi Price isn’t sure how to fulfill his one condition: that something great take place there while he’s gone. Emi may be a talented young production designer, already beginning to thrive in the competitive film industry, but she still feels like an average teen, floundering when it comes to romance. But when she and her best friend, Charlotte, discover a mysterious letter at the estate sale of a Hollywood film legend, Emi must move beyond the walls of her carefully crafted world to chase down the loose ends of a movie icon’s hidden life, leading her to uncover a decades’ old secret and the potential for something truly epic: love. (Novel)

4. The Falling in Love Montage by Ciara Smyth
Seventeen-year-old cynic Saoirse Clarke isn’t looking for a relationship. But when she meets mischievous Ruby, that rule goes right out the window. Sort of. Because Ruby has a loophole in mind: a summer of all the best cliché movie montage dates, with a definite ending come fall—no broken hearts, no messy breakup. It would be the perfect plan, if they weren’t forgetting one thing about the Falling in Love Montage: when it’s over, the characters have fallen in love…for real. (Novel)

5. Felix Ever After by Kacen Callender
Felix Love has never been in love, painful irony that it is. He desperately wants to know why it seems so easy for everyone but him to find someone. He is proud of his identity, but fears that he’s one marginalization too many– Black, queer, and transgender. When an anonymous student begins sending him transphobic messages– after publicly posting Felix’s deadname alongside images of him before he transitioned– Felix comes up with a plan for revenge. He didn’t count on his catfish scenario landing him in a quasi-love triangle. (Novel)

6. Flamer by Mike Curato
It’s the summer between middle school and high school, and Aiden Navarro is away at camp. Everyone’s going through changes―but for Aiden, the stakes feel higher. As he navigates friendships, deals with bullies, and spends time with Elias (a boy he can’t stop thinking about), he finds himself on a path of self-discovery and acceptance. (Graphic Novel)

7. The Girl From the Sea by Molly Knox Ostertag
Fifteen-year-old Morgan has a secret: She can’t wait to escape the perfect little island where she lives. She’s desperate to finish high school and escape her sad divorced mom, her volatile little brother, and worst of all, her great group of friends…who don’t understand Morgan at all. Because really, Morgan’s biggest secret is that she has a lot of secrets, including the one about wanting to kiss another girl. Then one night, Morgan is saved from drowning by a mysterious girl named Keltie. The two become friends and suddenly life on the island doesn’t seem so stifling anymore. But Keltie has some secrets of her own. And as the girls start to fall in love, everything they’re each trying to hide will find its way to the surface…whether Morgan is ready or not. (Graphic Novel)

8. Lumberjanes series by Noelle Stevenson & Shannon Watters, authors/creators
Friendship to the max! Jo, April, Mal, Molly and Ripley are five best pals determined to have an awesome summer together…and they’re not gonna let any insane quest or an array of supernatural critters get in their way. The library owns volumes 1-10. (Graphic Novels)

9. Running with Lions by Julian Winters
Bloomington High School Lions’ star goalie Sebastian Hughes should be excited about his senior year: His teammates are amazing, and he’s got a coach who doesn’t ask anyone to hide their sexuality. But when his estranged childhood-best-friend Emir Shah shows up at summer training camp, Sebastian realizes the team’s success may end up in the hands of the one guy who hates him. Determined to reconnect with Emir for the sake of the Lions, he sets out to regain Emir’s trust. But to Sebastian’s surprise, sweaty days on the pitch, wandering the town’s streets, and bonding on the weekends spark more than just friendship between them. (Novel)

10. The Summer of Jordi Perez (And the Best Burger in Los Angeles) by Amy Spalding
Seventeen, fashion-obsessed, and gay, Abby Ives has always been content playing the sidekick in other people’s lives – happy to focus on her plus-size style blog and her dreams of taking the fashion industry by storm. When she lands a great internship at her favorite boutique, she falls for her fellow intern, Jordi Perez. Hard. And now she’s competing against the girl she’s kissing to win the coveted paid job at the end of the internship. But really, nothing this summer is going as planned. She also unwittingly becomes friends with Jax, a lacrosse-playing bro-type who wants her help finding the best burger in Los Angeles, and she’s struggling to prove to her mother–the city’s celebrity health nut–that she’s perfectly content with who she is.