The Literary Arts students at Perpich Arts High School were asked for their recommendations for good books that they think others should read. Here is the diverse list they compiled along with their reasons for loving the book, as represented by their quotes. Books available at the Perpich Library are marked with an asterisk*. Click on titles for more information. 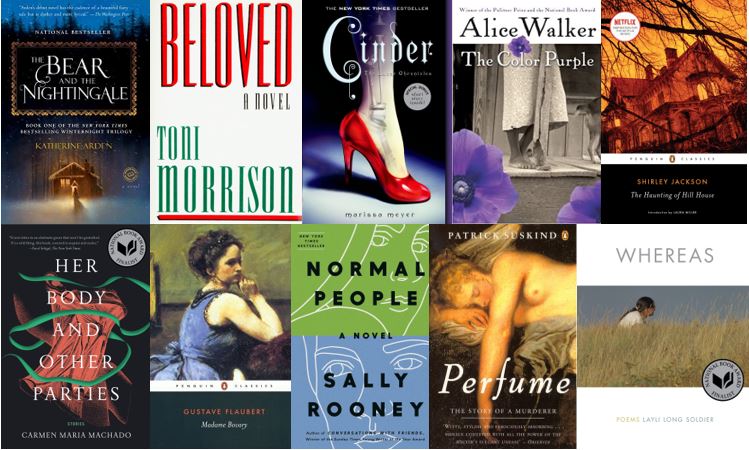 1. The Tea Dragon Society by Kay O’Neill
“Adorable fantasy graphic novel with soft queer rep and dragons. What more do you need?”

From the award-winning author of Princess Princess Ever After comes The Tea Dragon Society, a charming all-ages book that follows the story of Greta, a blacksmith apprentice, and the people she meets as she becomes entwined in the enchanting world of tea dragons.

2. Whereas by Layli Long Soldier*
“This book is a beautiful collection of poems in response to broken treaties and apologies to Indigenous Peoples. Long Soldier uses enthralling language to bring these issues to light.”

This volume confronts the coercive language of the United States government in its responses, treaties, and apologies to Native American peoples and tribes, and reflects that language in its officiousness and duplicity back on its perpetrators. Through an array of short lyrics, prose poems, longer narrative sequences, resolutions, and disclaimers, Layli Long Soldier has created an innovative text to examine histories, landscapes, her own writing, and her predicament inside national affiliations.

3. None Shall Sleep by Ellie Marney
“This book is perfect for fans of Criminal Minds! Marney uses captivating descriptions to tell the story of two college students recruited for the FBI to interview teenage killers from cold cases. They end up chasing an active killer who is linked to a cold case- and who specifically targets teenagers.”

In 1982, two teenagers—serial killer survivor Emma Lewis and US Marshal candidate Travis Bell—are recruited by the FBI to interview convicted juvenile killers and provide insight and advice on cold cases. From the start, Emma and Travis develop a quick friendship, gaining information from juvenile murderers that even the FBI can’t crack. But when the team is called in to give advice on an active case—a serial killer who exclusively hunts teenagers—things begin to unravel.

4. Cinder by Marissa Meyers*
“The first installment of The Lunar Chronicles, a series of futuristic loose retellings of classic tales such as Cinderella, Red Riding Hood, Rapunzel, etc. All of the stories crossover and create a very interesting plot along with various side plots that are very captivating. I’ve loved this series for years now. It’s an exquisite pick if you like sci-fi and fantasy, as well as a bit of romance.”

As plague ravages the overcrowded Earth, observed by a ruthless lunar people, Cinder, a gifted mechanic and cyborg, becomes involved with handsome Prince Kai and must uncover secrets about her past in order to protect the world in this futuristic take on the Cinderella story.

5. The Color of Water by James McBride*
“This is the book that made me like memoir, and I remember reading it early spring while swinging at the park near my house. I have no more specific reasoning, I just enjoy it.”

Who is Ruth McBride Jordan? A self-declared “light-skinned” woman evasive about her ethnicity, yet steadfast in her love for her twelve children. James McBride, journalist, musician and son, explores his mother’s past, as well as his own upbringing and heritage, in a poignant and powerful memoir.

6. Madame Bovary by Gustave Flaubert*
“A somber piece for a slow morning. If you enjoy period pieces and kooky female leads, this novel might help you pass the time pleasantly.”

Madame Bovary, originally published as Madame Bovary: Provincial Manners, is the debut novel of French writer Gustave Flaubert, published in 1856. The eponymous character lives beyond her means in order to escape the banalities and emptiness of provincial life.

7. The Color Purple by Alice Walker*
“Gayer than you’d think.”

Beautifully imagined and deeply compassionate, this is the story of two sisters–one a missionary in Africa and the other a child wife living in the South–who sustain their loyalty to and trust in each other across time, distance, and silence. This classic novel of American literature is rich with passion, pain, inspiration, and an indomitable love of life.

8. Carmilla by Sheridan Le Fanu
“This gothic lesbian romance is one of my favorite things to read once colder weather rolls around. It was one of the first vampire novels to popularize the genre, due to its drama and suspense. A true work of gothic literature, set in a haunted castle in the hills, Carmilla is perfect for rainy day reading.”

In an isolated castle deep in the Austrian forest, Laura leads a solitary life with only her ailing father for company. Until one moonlit night, a horse-drawn carriage crashes into view, carrying an unexpected guest – the beautiful Carmilla. So begins a feverish friendship between Laura and her mysterious, entrancing companion.

9. The Bear and the Nightingale by Katherine Arden*
“This is a beautiful blend of folklore, history, and magic with one of the most unique and memorable main characters I’ve ever read. Highly recommended as a cozy read for a snowy day.”

A novel inspired by Russian fairy tales follows the experiences of a wild young girl who taps the mysterious powers of a precious necklace given to her father years earlier to save her village from dark and dangerous forces.

10. The Diabolic by S. J. Kincaid
“This is one of the most amazing sci-fi books I’ve ever read, filled with intrigue, politics, love and revenge set against the backdrop of an unstable empire.”

Red Queen meets The Hunger Games in this epic novel about what happens when a senator’s daughter is summoned to the galactic court as a hostage, but she’s really the galaxy’s most dangerous weapon in disguise.

11. Her Body and Other Parties by Carmen Maria Machado*
“A visceral collection of queer horror stories that redefines modern horror.”

Presents a collection of short stories about the realities of women’s lives and the violence visited upon their bodies. A wife refuses her husband’s entreaties to remove the green ribbon from around her neck. A woman recounts her sexual encounters as a plague slowly consumes humanity. A salesclerk in a mall makes a horrifying discovery within the seams of the store’s prom dresses. One woman’s surgery-induced weight loss results in an unwanted houseguest. And in ‘Especially Heinous, ‘ Machado reimagines every episode of Law & Order: Special Victims Unit, a show we naïvely assumed had shown it all, generating a phantasmagoric police procedural full of doppelgängers, ghosts, and girls with bells for eyes.

12. A Children’s Bible by Lydia Millet
“NOT what you think from the title. Please don’t discount it because of that! This book is an interesting look at the climate crisis and failings of older generations through the perspective of a cynical teenager. The relationships between the kids are beautiful and their attitudes toward the adults in their lives are both relatable and satisfying.”

A Children’s Bible follows a group of twelve eerily mature children on a forced vacation with their families at a sprawling lakeside mansion. Contemptuous of their parents, the children decide to run away when a destructive storm descends on the summer estate, embarking on a dangerous foray into the apocalyptic chaos outside.

13. Normal People by Sally Rooney*
“A poignant account of the lives of two normal people and their relationship through late high school and early adulthood. Sad in the way life is sad. Kind of a downer, but lovely!”

At school Connell and Marianne pretend not to know each other. He’s popular and well-adjusted, star of the school football team, while she is lonely, proud, and intensely private. But when Connell comes to pick his mother up from her job at Marianne’s house, a strange and indelible connection grows between the two teenagers–one they are determined to conceal. A year later, they’re both studying at Trinity College in Dublin. Marianne has found her feet in a new social world while Connell hangs at the sidelines, shy and uncertain. Throughout their years at university, Marianne and Connell circle one another, straying toward other people and possibilities but always magnetically, irresistibly drawn back together. And as she veers into self-destruction and he begins to search for meaning elsewhere, each must confront how far they are willing to go to save the other.

14. The Haunting of Hill House by Shirley Jackson*
“It’s one of my favorite horror novels, and has a ton of queer themes.”

The story of four seekers who arrive at a notoriously unfriendly pile called Hill House: Dr. Montague, an occult scholar looking for solid evidence of a “haunting”; Theodora, his lighthearted assistant; Eleanor, a friendless, fragile young woman well acquainted with poltergeists; and Luke, the future heir of Hill House. At first, their stay seems destined to be merely a spooky encounter with inexplicable phenomena. But Hill House is gathering its powers — and soon it will choose one of them to make its own.

15. Beloved by Tony Morrison*
“Incredibly thought provoking, skin rattling, and intelligently written. Got to be a 10/10 from me.”

After Paul D. finds his old slave friend Sethe in Ohio and moves in with her and her daughter Denver, a strange girl comes along by the name of “Beloved.” Sethe and Denver take her in and then strange things begin to happen. Set in rural Ohio several years after the Civil War, this profoundly affecting chronicle of slavery and its aftermath is Toni Morrison’s greatest novel, a dazzling achievement, and the most spellbinding reading experience of the decade. A brutally powerful, mesmerizing story.

The youngest, half-goblin son of the Emperor has lived his entire life in exile, distant from the Imperial Court and the deadly intrigue that suffuses it. But when his father and three sons in line for the throne are killed in an “accident,” he has no choice but to take his place as the only surviving rightful heir.

17. Conquest of Bread by Peter Kropotkin
“Anarchy, baby! Get in with the theory!”

The Conquest of Bread is Peter Kropotkin’s most extensive study of human needs and his outline of the most rational and equitable means of satisfying them. A combination of detailed historical analysis and far-reaching Utopian vision, this is a step-by-step guide to social revolution: the concrete means of achieving it, and the world that humanity’s “constructive genius” is capable of creating.

18. Perfume: The Story of a Murderer by Patrick Suskind*
“One of Kurt Cobain’s favorite books. Short, good horror novel.”

An acclaimed bestseller and international sensation, Patrick Suskind’s classic novel provokes a terrifying examination of what happens when one man’s indulgence in his greatest passion—his sense of smell—leads to murder.

19. Death in Midsummer by Yukio Mishima
“A collection of very dreamy short stories.”

Recognized throughout the world for his brilliance as a novelist and playwright, Yukio Mishima is also noted as a master of the short story in his native Japan, where the form is practiced as a major art. Nine of his finest stories were selected by Mishima himself for translation in this book; they represent his extraordinary ability to depict, with deftness and penetration, a wide variety of human beings in moments of significance. Often his characters are sophisticated modern Japanese who turn out to be not so liberated from the past as they had thought.

20. Steel Crow Saga by Paul Krueger
“Banger Asian-inspired fantasy with plenty of queer rep, read it in basically one sitting. 10/10.”

Four destinies collide in a unique fantasy world of war and wonders, where empire is won with enchanted steel and magical animal companions fight alongside their masters in battle.

Books available at the Perpich Library are marked with an asterisk*.