Minnesota is the home of many amazing authors from diverse backgrounds. Perpich Library contains several of their works. This list is just a small sample of what Minnesota authors have to offer. All items on this list are available at the Perpich library. Click on titles for more information. 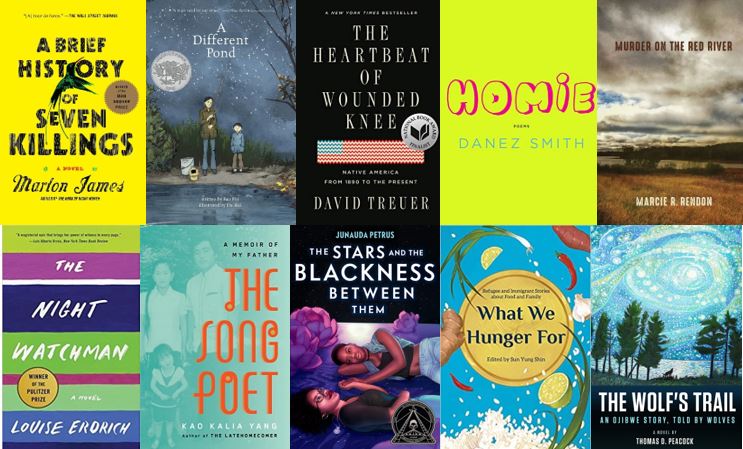 1. The Night Watchman by Louise Erdrich
Based on the extraordinary life of National Book Award-winning author Louise Erdrich’s grandfather who worked as a night watchman and carried the fight against Native dispossession from rural North Dakota all the way to Washington, D.C., this powerful novel explores themes of love and death with lightness and gravity and unfolds with the elegant prose, sly humor, and depth of feeling of a master craftsman.

2. A Brief History of Seven Killings by Marlon James
On December 3, 1976, just before the Jamaican general election and two days before Bob Marley was to play the Smile Jamaica Concert to ease political tensions in Kingston, seven unnamed gunmen stormed the singer’s house, machine guns blazing. The attack wounded Marley, his wife, and his manager, and injured several others. Little was officially released about the gunmen, but rumors abounded regarding the assassins’ fates. A Brief History of Seven Killings is James’s fictional exploration of that dangerous and unstable time in Jamaica’s history and beyond.

3. The Wolf’s Trail: An Ojibwe Story, Told by Wolves by Thomas Peacock
The Wolf’s Trail tells of Zhi-shay’, an elder wolf, and a litter of young wolves living somewhere on the side of a hill overlooking the river that flows through Nagahchiwanong in northern Minnesota. Zhi-shay’, who knows the whole story of the parallel relationship between wolves and the Ojibwe going all the way back to the Beginning, sharing it with his nieces and nephews, and us. Replete with universal lessons, The Wolf’s Trail is the story of the Ojibwe, told by wolves, of what they were and have become, and the promise of their becoming.

4. The Stars and the Blackness Between Them by Junauda Petrus
Told in two distinct and irresistible voices, Junauda Petrus’s bold and lyrical debut is the story of two black girls from very different backgrounds – one from Trinidad, the other from Minneapolis – finding love and happiness in a world that seems determined to deny them both. Mabel quickly falls hard for Audre and is determined to take care of her as she tries to navigate an American high school. But their romance takes a turn when test results reveal exactly why Mabel has been feeling low-key sick all summer and suddenly it’s Audre who is caring for Mabel as she faces a deeply uncertain future.

5. A Different Pond by Bao Phi
A 2018 Caldecott Honor Book, A Different Pond is an unforgettable story about a simple event – a long-ago fishing trip. Graphic novelist Thi Bui and acclaimed poet Bao Phi deliver a powerful, honest glimpse into a relationship between father and son – and between cultures, old and new. (Also available as a free ebook)

6. Murder on the Red River by Marcie Rendon
Set in 1970s along Red River Valley, Marcie R. Rendon’s gripping new mystery follows the life of a young Ojibwe woman as she struggles to come to terms with the callous murder of a Native American stranger, bringing to life the gritty, dark reality of a flawed foster care system and the oppression of indigenous people.

7. What We Hunger For: Refugee and Immigrant Stories about Food and Family by Sun Yung Shin (editor)
In What We Hunger For, fourteen writers from refugee and immigrant families write about their complicated, poignant, funny, difficult, joyful, and ongoing relationships to food, cooking, and eating. They journey to Algeria, to Thailand, to Uganda to soothe body and mind; connect with generations past and present through rituals and recipes handed down from parent to child; and savor the flavors of home, whether creating familiar dishes in less-familiar places or coming to appreciate ancestral wisdom translated into modern foodways.

8. Homie: Poems by Danez Smith
Homie is Danez Smith’s magnificent anthem about the saving grace of friendship. Rooted in the loss of one of Smith’s close friends, this book comes out of the search for joy and intimacy within a nation where both can seem scarce and getting scarcer. In poems of rare power and generosity, Smith acknowledges that in a country overrun by violence, xenophobia, and disparity, and in a body defined by race, queerness, and diagnosis, it can be hard to survive, even harder to remember reasons for living. But then the phone lights up, or a shout comes up to the window, and family―blood and chosen―arrives with just the right food and some redemption.

9. The Heartbeat of Wounded Knee: Native America from 1890 to the Present by David Treuer
In The Heartbeat of Wounded Knee, Treuer melds history with reportage and memoir. Tracing the tribes’ distinctive cultures from first contact, he explores how the depredations of each era spawned new modes of survival. The devastating seizures of land gave rise to increasingly sophisticated legal and political maneuvering that put the lie to the myth that Indians don’t know or care about property. The forced assimilation of their children at government-run boarding schools incubated a unifying Native identity. Conscription in the US military and the pull of urban life brought Indians into the mainstream and modern times, even as it steered the emerging shape of self-rule and spawned a new generation of resistance.

10. The Song Poet: A Memoir of My Father by Kao Kalia Yang
Kao Kalia Yang retells the life of her father, Bee Yang, the song poet―a Hmong refugee in Minnesota, driven from the mountains of Laos by America’s Secret War. Bee sings the life of his people through the war-torn jungle and a Thai refugee camp. The songs fall away in the cold, bitter world of a St. Paul housing project and on the factory floor, until, with the death of Bee’s mother, they leave him for good. But before they do, Bee, with his poetry, has burnished a life of poverty for his children, polishing their grim reality so that they might shine. Currently the chosen book for One Book, One Minnesota. (Also available as a free audiobook)