The Perpich Library has a wide selection of diverse nonfiction books in its collection to support both academic and arts area classes. Here are a few of the newest books added to the general nonfiction collection over the summer. All items on this list are available at the Perpich library. Click on titles for more information. 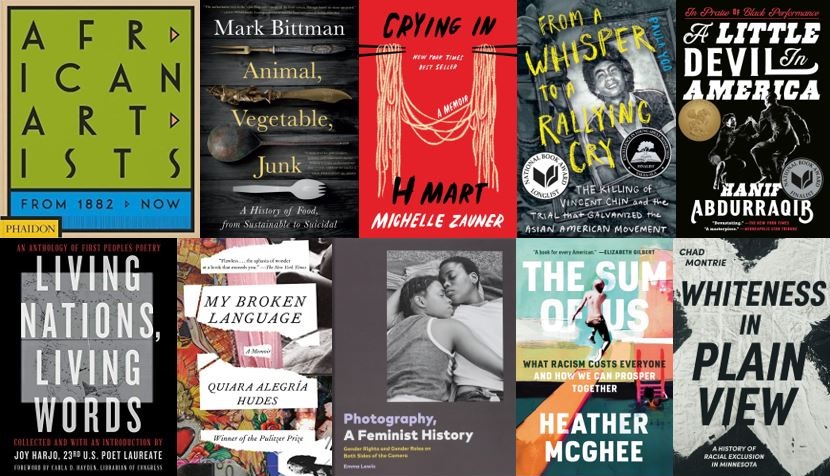 1. African Artists: From 1882 to Now edited by Rebecca Morrill and Simon Hunegs
This groundbreaking new book, created in collaboration with a prestigious global advisory board, represents the most substantial appraisal of contemporary artists born or based in Africa available. Features the work of more than 300 artists, including El Anatsui, Marlene Dumas, David Goldblatt, Lubaina Himid, William Kentridge, Julie Mehretu, Wangechi Mutu, and Robin Rhode, as well as lesser-known names from across Africa, with stunning and surprising examples of their art paired with insightful texts that demonstrate their contribution to the painting, sculpture, installation, photography, moving image, and performance art.

2. Animal, Vegetable, Junk: A History of Food, from Sustainable to Suicidal by Mark Bittman
Trusted food authority Mark Bittman offers a panoramic view of how the frenzy for food has driven human history to some of its most catastrophic moments, from slavery and colonialism to famine and genocide—and to our current moment, wherein Big Food exacerbates climate change, plunders our planet, and sickens its people. Even still, Bittman refuses to concede that the battle is lost, pointing to activists, workers, and governments around the world who are choosing well-being over corporate greed and gluttony, and fighting to free society from Big Food’s grip.

3. Crying in H Mart: A Memoir by Michelle Zauner
From the indie rockstar of Japanese Breakfast fame, and author of the viral 2018 New Yorker essay that shares the title of this book, an unflinching, powerful memoir about growing up Korean-American, losing her mother, and forging her own identity. In this exquisite story of family, food, grief, and endurance, Michelle Zauner proves herself far more than a dazzling singer, songwriter, and guitarist.

4. From a Whisper to a Rallying Cry: The Killing of Vincent Chin and the Trial that Galvanized the Asian American Movement by Paula Yoo
America in 1982: Japanese car companies are on the rise and believed to be putting U.S. auto workers out of their jobs. Anti–Asian American sentiment simmers, especially in Detroit. A bar fight turns fatal, leaving a Chinese American man, Vincent Chin, beaten to death at the hands of two white men, autoworker Ronald Ebens and his stepson, Michael Nitz. Paula Yoo has crafted a searing examination of the killing and the trial and verdicts that followed. When Ebens and Nitz pled guilty to manslaughter and received only a $3,000 fine and three years’ probation, the lenient sentence sparked outrage. The protests that followed led to a federal civil rights trial―the first involving a crime against an Asian American―and galvanized what came to be known as the Asian American movement.

5. A Little Devil in America: In Praise of Black Performance by Hanif Abdurraqib
“I was a devil in other countries, and I was a little devil in America, too.” Inspired by these few words, spoken by Josephine Baker at the 1963 March on Washington, MacArthur “Genius Grant” Fellow and bestselling author Hanif Abdurraqib has written a profound and lasting reflection on how Black performance is inextricably woven into the fabric of American culture. Each moment in every performance he examines—whether it’s the twenty-seven seconds in “Gimme Shelter” in which Merry Clayton wails the words “rape, murder,” a schoolyard fistfight, a dance marathon, or the instant in a game of spades right after the cards are dealt—has layers of resonance in Black and white cultures, the politics of American empire, and Abdurraqib’s own personal history of love, grief, and performance.

6. Living Nations, Living Words: An Anthology of First Peoples Poetry edited by Joy Harjo
Joy Harjo, the first Native poet to serve as U.S. Poet Laureate, has championed the voices of Native peoples past and present. Her signature laureate project gathers the work of contemporary Native poets into a national, fully digital map of story, sound, and space, celebrating their vital and unequivocal contributions to American poetry. This companion anthology features each poem and poet from the project―including Natalie Diaz, Ray Young Bear, Craig Santos Perez, Sherwin Bitsui, and Layli Long Soldier, among others―to offer readers a chance to hold the wealth of poems in their hands.

7. My Broken Language: A Memoir by Quiara Alegría Hudes
Weaving together Hudes’s love of music with the songs of her family, the lessons of North Philly with those of Yale, this is a multimythic dive into home, memory, and belonging―narrated by an obsessed girl who fought to become an artist so she could capture the world she loves in all its wild and delicate beauty.

8. Photography, A Feminist History by Emma Lewis
In ten thematic, chronological sections, Tate Modern curator Emma Lewis explores the vital role women artists have played in shaping the ever-evolving medium of photography. Lewis has compiled work from more than 200 different women and nonbinary photographers along with short essays on 75 different artists, many informed by her interviews with the subjects. From the studio portraiture of the late nineteenth century to the photojournalism of Dorothea Lange and Lee Miller in the early twentieth—and from second-wave feminist critiques of gender roles to contemporary selfies and social media personae—this volume examines different genres, styles, and approaches to photography from the 1800s to the present.

9. The Sum of Us: What Racism Costs Everyone and How We Can Prosper Together by Heather McGhee
Offers an analysis, through economic and sociological research, of racism’s costs across the entirety of society, Black and white. MacGhee plumbs the depths of how racism divides society to result in many of the current economic ills – from rising personal debt to failing public infrastructure – but also how benefits are gained when people rise above racism to come together to achieve what they cannot do on their own.

10. Whiteness in Plain View: A History of Racial Exclusion in Minnesota by Chad Montrie
Examines the ways White residents across Minnesota acted to intimidate, control, remove, and keep out African Americans over the course of the nineteenth and twentieth centuries. Their methods ranged from anonymous threats, vandalism, and mob violence to restrictive housing covenants, realtor deceit, and mortgage discrimination, and they were aided by local, state, and federal government agencies as well as openly complicit public officials. What they did was not an anomaly or aberration, in some particular place or passing moment, but rather common and continuous. Chapter by chapter, the book shows that Minnesota’s overwhelming Whiteness is neither accidental nor incidental, and that racial exclusion’s legacy is very much woven into the state’s contemporary politics, economy, and culture.