Nonfiction Books By and About Native Americans from Perpich Library

This month we honor the rich and diverse cultures, traditions, histories, and continuing contributions of Native peoples by featuring nonfiction books by and about Native Americans. 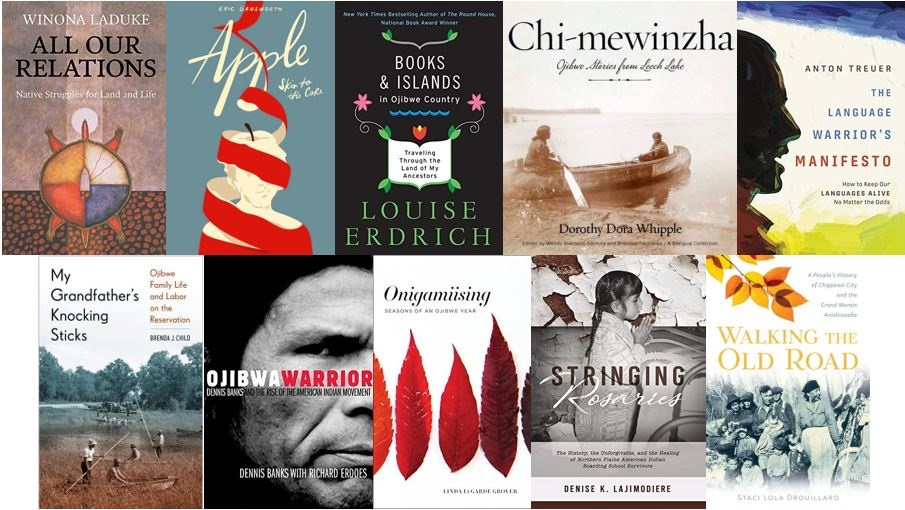 1. All Our Relations: Native Struggles for Land and Life by Winona LaDuke
This thoughtful, in-depth account of Native struggles against environmental and cultural degradation features chapters on the Seminoles, the Anishinaabeg, the Innu, the Northern Cheyenne, and the Mohawks, among others. Filled with inspiring testimonies of struggles for survival, each page of this volume speaks forcefully for self-determination and community.

2. Apple (Skin to the Core): A Memoir in Words and Pictures by Eric Gansworth
The term ‘Apple’ is a slur in Native communities across the country. It’s for someone supposedly ‘red on the outside, white on the inside.’ Eric Gansworth is telling his story in Apple (Skin to the Core). The story of his family, of Onondaga among Tuscaroras, of Native folks everywhere. From the horrible legacy of the government boarding schools, to a boy watching his siblings leave and return and leave again, to a young man fighting to be an artist who balances multiple worlds. Eric shatters that slur and reclaims it in verse and prose and imagery that truly lives up to the word heartbreaking.

3. Books & Islands in Ojibwe Country: Traveling Through the Land of My Ancestors by Louise Erdrich
Erdrich takes us on an illuminating tour through the terrain her ancestors have inhabited for centuries: the lakes and islands of southern Ontario. Summoning to life the Ojibwe’s sacred spirits and songs, their language and sorrows, she considers the many ways in which her tribe—whose name derives from the word ozhibii’ige, “to write”—have influenced her. A blend of history, mythology, and memoir, Books and Islands in Ojibwe Country is an enchanting meditation on modern life, natural splendor, and the ancient spirituality and creativity of Erdrich’s native homeland—a long, elemental tradition of storytelling that is in her blood.

4. Chi-mewinzha: Ojibwe Stories from Leech Lake by Dorothy Dora Whipple
In the first ninety-five years of her life, Dorothy Dora Whipple has seen a lot of history, and in this book that history, along with the endangered Ojibwe language, sees new life. A bilingual record of Dorothy’s stories, ranging from personal history to cultural teachings, Chi-mewinzha (long ago) presents this venerable elder’s words in the original Ojibwe, painstakingly transcribed, and in English translation to create an invaluable resource for learning this cherished language. The events of Dorothy Dora Whipple’s life resonate with Ojibwe life and culture through the twentieth century, from tales of growing up among the Anishinaabeg of the Leech Lake Reservation in the 1920s and 1930s to an account of watching an American Indian Movement protest in Minneapolis during the 1970s.

5. The Language Warrior’s Manifesto: How to Keep Our Languages Alive No Matter the Odds by Anton Treuer
Anton Treuer has been at the forefront of the battle to revitalize Ojibwe for many years. In this impassioned argument, he discusses the interrelationship between language and culture, the problems of language loss, strategies and tactics for resisting, and the inspiring stories of successful language warriors. He recounts his own sometimes hilarious struggle to learn Ojibwe as an adult, and he depicts the astonishing success of the language program at Lac Courte Oreilles, where a hundred children now speak Ojibwe as their first language.

6. My Grandfather’s Knocking Sticks: Ojibwe Family Life and Labor on the Reservation by Brenda J. Child
When Ojibwe historian Brenda Child uncovered the Bureau of Indian Affairs file on her grandparents, it was an eye-opening experience. The correspondence, full of incendiary comments on their morals and character, demonstrated the breathtakingly intrusive power of federal agents in the early twentieth century. While telling her own family’s stories from the Red Lake Reservation, as well as stories of Ojibwe people around the Great Lakes, Child examines the disruptions and the continuities in daily work, family life, and culture faced by Ojibwe people of Child’s grandparents’ generation—a generation raised with traditional lifeways in that remote area.

8. Onigamiising: Seasons of an Ojibwe Year by Linda LeGarde Grover
Long before it came to be known as Duluth, the land at the western tip of Lake Superior was known to the Ojibwe as Onigamiising, “the place of the small portage.” There the Ojibwe lived in keeping with the seasons, moving among different camps for hunting and fishing, for cultivating and gathering, for harvesting wild rice and maple sugar. In Onigamiising, Linda LeGarde Grover accompanies us through this cycle of the seasons, one year in a lifelong journey on the path to Mino Bimaadiziwin, the living of a good life. In fifty short essays, Grover reflects on the spiritual beliefs and everyday practices that carry the Ojibwe through the year and connect them to this northern land of rugged splendor.

9. Stringing Rosaries: The History, the Unforgivable, and the Healing of Northern Plains American Indian Boarding School Survivors by Denise Lajimodiere
Denise K. Lajimodiere’s interest in American Indian boarding school survivors’ stories evolved from recording her father and other family members speaking of their experiences. Her research helped her gain insight, a deeper understanding of her parents, and how and why she and her siblings were parented in the way they were. That insight led her to an emotional ceremony of forgiveness, described in the last chapter of Stringing Rosaries. The journey to record survivors’ stories led her through the Dakotas and Minnesota and into the personal and private space of boarding school survivors.

10. Walking the Old Road: A People’s History of Chippewa City and the Grand Marais Anishinaabe by Staci Lola Drouillard
At the turn of the 19th century, one mile east of Grand Marais, Minnesota, you would have found Chippewa City, a village that as many as 200 Anishinaabe families called home. Today you will find only Highway 61, private lakeshore property, and the one remaining village building: St. Francis Xavier Church. In Walking the Old Road, Staci Lola Drouillard guides listeners through the story of that lost community, reclaiming for history the Ojibwe voices that have for so long, and so unceremoniously, been silenced.