On Thursday, March 7, three Perpich students had an unique experience. They performed excerpts from Rose McGee’s play, “Kumbayah: The Juneteenth Story,” with an exceptional cast from Omaha, Nebraska at the annual Minnesota Association of School Administrators (MASA) Spring Conference. The scenes were directed by Omaha-based artist Denise Chapman. The performance was powerful and received a standing ovation. Following the performance, the actors facilitated a discussion with the audience of educators. The Perpich students delivered some of the most poignant and thoughtful reflections and calls to action. 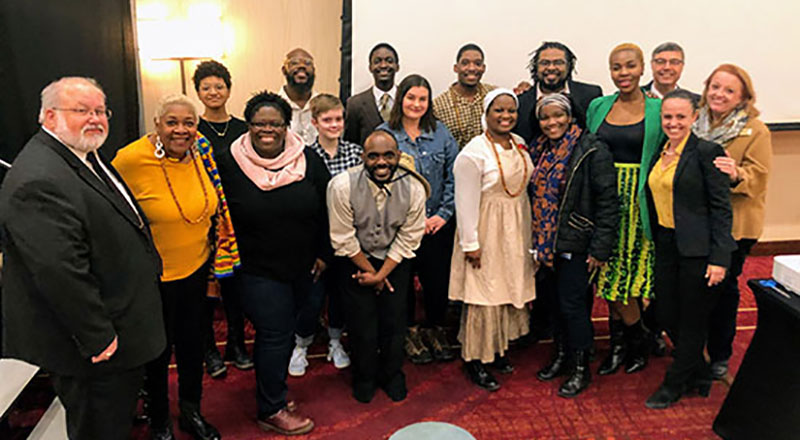 Set in present day, “Kumbayah” explores the story of Juneteenth, the oldest known celebration commemorating the end of slavery in the United States. With fine storytelling tradition, we are taken back in time as modern teenagers come to understand the significance of history.

Rose McGee, M.Ed. is founder of McGee Circle Series, a storyteller, educator, entrepreneur, and facilitator who uses the art of story circle when convening. In response to racial unrest, Rose McGee created Sweet Potato Comfort Pies. Since 2014, the idea has developed into a full-blown community project, delivering pies and comfort to communities in trauma. McGee spreads peace with pies. Rose resides in Golden Valley, Minnesota where in 2017 she was named Golden Valley Rotary’s Citizen of the Year.

McGee approached Perpich Center for Arts Education to put a performance of “Kumbayah: The Juneteenth Story” on stage this spring. Ahead of that, Perpich Executive Director, Dr. Curt Tryggestad, recommended the performance to the MASA Spring Conference organizers. Tryggestad is Past President of the organization.