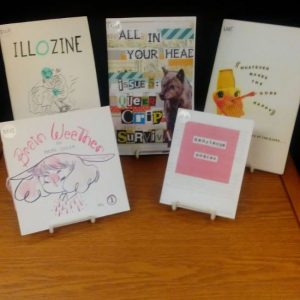 The Perpich Library started a zine collection this summer! What is a zine? They are self-published works created to share thoughts, feelings, art, experience, knowledge, and more with others. A zine is a small-circulation self-published work of original or appropriated texts and images, usually reproduced via photocopier. Zines are the product of either a single person or of a very small group, and are popularly photocopied into physical prints for circulation.

Thanks to the work of Elleri Scriver (Literary Arts, 2018), the Library now boasts almost 200 zines for students and staff to peruse and find inspiration.

From Wikipedia: “Dissidents and members of socially marginalized groups have published their own opinions in leaflet and pamphlet form for as long as such technology has been available. The concept of zines had an ancestor in the amateur press movement of the late 19th and early 20th century, which would in its turn cross-pollinate with the subculture of science fiction fandom in the 1930s. The popular graphic-style associated with zines is influenced artistically and politically by the subcultures of Dada, Fluxus, Surrealism, and Situationism.

Many trace zines’ lineage from as far back as Thomas Paine’s exceptionally popular 1775 pamphlet Common Sense, Benjamin Franklin’s literary magazine for psychiatric patients at a Pennsylvania hospital, and The Dial (1840–44) by Margaret Fuller and Ralph Waldo Emerson.”