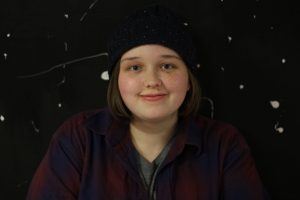 Mary Pfeifer is a Visual Arts student from Rochester, Minnesota, and the daughter of Margaret and Eric Pfeifer.

National Merit Semifinalists are determined by their performance on the Preliminary SAT test (PSAT.) The PSAT was administered last year when students were juniors. More than 1.5 million juniors in more than 21,000 high schools took that test, officials say. Mary is among the top 16,000 high school seniors (less than 1%) in the country on this academic measure. These academically talented high school seniors have an opportunity to continue in the competition for 7,600 National Merit Scholarships worth more than $31 million that will be offered this spring.

Conn McCartan, Interim High School Principal said, “The Perpich school community congratulates Mary on this amazing accomplishment. Having scholars that are among the nation’s best in our halls reinforces our reputation as a national leader in artistic and academic excellence.”

The next step for our semifinalist is to submit a detailed scholarship application, providing information about the student’s academic record, participation in school and community activities, demonstrated leadership abilities, employment, honors and awards received, etc. Finalists will be announced in February, and those who advance will learn as early as April whether they’ve earned a scholarship.