Women and girls have historically had to work harder than their counterparts to get the rights they deserve, especially those women and girls of color. This selection of picture books features BIPOC (Black, Indigenous, and people of color) women and girls who were brave enough to challenge the systemic sexism and/or racism in the world around them and change it for the betterment of all. These titles are available for lending from the Perpich Library. 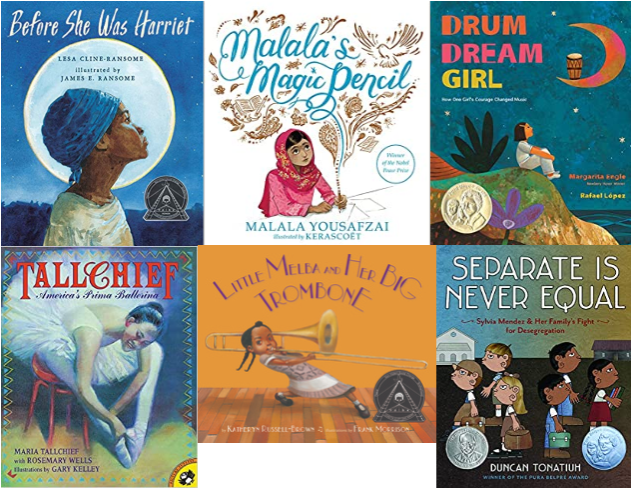 1. Before She Was Harriet by Lesa Cline-Ransome (Author), James E. Ransome (Illustrator)
We know her today as Harriet Tubman, but in her lifetime she was called by many names. As “General Tubman” she was a Union spy. As “Moses” she led hundreds to freedom on the Underground Railroad. As “Minty” she was a slave whose spirit could not be broken. As “Araminta” she was a young girl whose father showed her the stars and the first steps on the path to freedom. An evocative poem and stunning watercolors come together to honor a woman of humble origins whose courage and compassion make her a larger than life hero.

2. Drum Dream Girl: How One Girl’s Courage Changed Music by Margarita Engle (Author), Rafael Lopez (Illustrator)
Girls cannot be drummers. Long ago on an island filled with music, no one questioned that rule – until the drum dream girl. In her city of drumbeats, she dreamed of pounding tall congas and tapping small bongós. She had to keep quiet. She had to practice in secret. But when at last her dream-bright music was heard, everyone sang and danced and decided that both girls and boys should be free to drum and dream. Inspired by the childhood of Millo Castro Zaldarriaga, a Chinese-African-Cuban girl who broke Cuba’s traditional taboo against female drummers, Drum Dream Girl tells an inspiring true story for dreamers everywhere.

3. Little Melba and Her Big Trombone by Katheryn Russell-Brown (Author), Frank Morrison (Illustrator)
Melba Doretta Liston loved the sounds of music from as far back as she could remember. At age seven, Melba fell in love with a big, shiny trombone, and soon taught herself to play the instrument. By the time she was a teenager, Melba’s extraordinary gift for music led her to the world of jazz. She joined a band led by trumpet player Gerald Wilson and toured the country. Overcoming obstacles of race and gender, Melba went on to become a famed trombone player and arranger, spinning rhythms, harmonies, and melodies into gorgeous songs for all the jazz greats of the twentieth century.

4. Malala’s Magic Pencil by Malala Yousafzai (Author), Kerascoët (Illustrator)
As a child in Pakistan, Malala made a wish for a magic pencil. She would use it to make everyone happy, to erase the smell of garbage from her city, and to sleep an extra hour in the morning. But as she grew older, Malala saw that there were more important things to wish for. She saw a world that needed fixing. And even if she never found a magic pencil, Malala realized that she could still work hard every day to make her wishes come true.

5. Separate Is Never Equal: Sylvia Mendez and Her Family’s Fight for Desegregation by Duncan Tonatiuh
When her family moved to the town of Westminster, California, young Sylvia Mendez was excited about enrolling in her neighborhood school. But she and her brothers were turned away and told they had to attend the Mexican school instead. Sylvia could not understand why – she was an American citizen who spoke perfect English. Unable to get a satisfactory answer from the school board, the Mendez family decided to take matters into its own hands and organize a lawsuit. In the end, the Mendez family’s efforts helped bring an end to segregated schooling in California in 1947, seven years before the landmark Supreme Court ruling in Brown v. Board of Education ended segregation in schools across America.

6. Tallchief: America’s Prima Ballerina by Maria Tallchief (Author), Rosemary Wells (Author), Gary Kelley (Illustrator)
Growing up on the Osage Indian reservation, Maria Tallchief was a gifted pianist and dancer. According to Osage tradition, women are not permitted to dance, but Maria’s parents recognized her gifts and allowed her to break the rule. Then when Maria reached the age of twelve, her father told her it was time to choose between her two loves. Maria chose ballet. It was a decision that would change not only the course of her life, but the face of classical ballet in America.