Remembering Artists We Lost in 2021

The world lost several amazing artists, authors, and musicians this past year. While we mourn their loss, we also celebrate the legacy of art, words, and music that they left behind. This is a list of just a few of the artists who passed away in 2021, and a taste of what they created while they were alive. All items on this list are available at the Perpich library. Click on titles for more information. 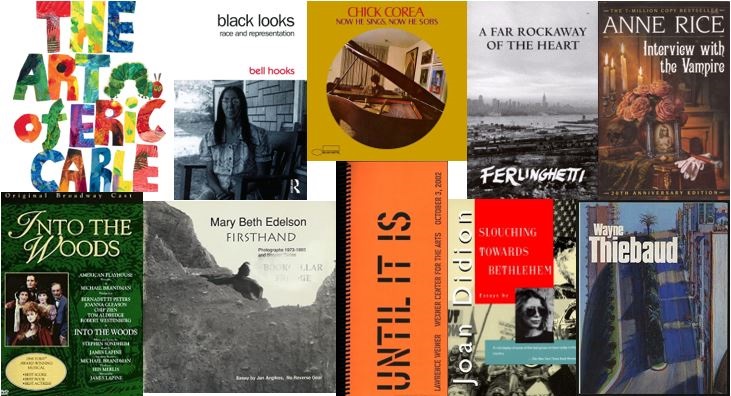 “Simplify, slow down, be kind. And don’t forget to have art in your life – music, paintings, theater, dance, and sunsets.”

The Art of Eric Carle
Portrait of the children’s author/illustrator, includes over sixty full-color illustrations from his books, examples of his student artwork, autobiographical information and photographs, and essays on his life and art by friends, critics, and colleagues.

“I write music to celebrate life. I think most artists do, no matter how they themselves describe it. It’s the joy of creating. It’s a way of life.”

Now He Sings, Now He Sobs (CD)
The second album by Chick Corea, released in December of 1968 on Solid State Records. The album features a trio consisting of Corea on acoustic piano, bassist Miroslav Vitouš, and drummer Roy Haynes. All of the tracks on the original album are improvisations based on Corea’s ideas, with some being entirely free improvisations. (from Wikipedia)

“I write entirely to find out what I’m thinking, what I’m looking at, what I see and what it means. What I want and what I fear.”

“What I am most concerned with is spirituality as it manifests itself in our bodies/minds and how this affects how we see/feel about our being, and as a feminist awakening to the greater self as female, as well as making a political statement for women that says I am. I am large, and I am my body, and I am not going away.”

“I am awaiting, perpetually and forever, a renaissance of wonder.”

A Far Rockaway of the Heart
Ferlinghetti’s sequel to A Coney Island of the Mind, written forty years later, in what the author has called “a poetry seizure” that lasted more than a year. A sequence of one hundred and one poems with recurrent themes, it includes various sections on love, art, music, history, and literature, as well as confrontations with major figures in the avant-garde before the arrival of the Beat Generation.

“I will not have my life narrowed down. I will not bow down to somebody else’s whim or to someone else’s ignorance.”

Black Looks: Race and Representation
In the critical essays collected in Black Looks, bell hooks interrogates old narratives and argues for alternative ways to look at blackness, black subjectivity, and whiteness. Her focus is on spectatorship―in particular, the way blackness and black people are experienced in literature, music, television, and especially film―and her aim is to create a radical intervention into the way we talk about race and representation.

“You do have a story inside you; it lies articulate and waiting to be written — behind your silence and your suffering.”

Interview with the Vampire
Here are the confessions of a vampire. Hypnotic, shocking, and chillingly sensual, this is a novel of mesmerizing beauty and astonishing force—a story of danger and flight, of love and loss, of suspense and resolution, and of the extraordinary power of the senses. It is a novel only Anne Rice could write.

“I love the theater as much as music, and the whole idea of getting across to an audience and making them laugh, making them cry – just making them feel – is paramount to me.”

Into the Woods (DVD)
A baker and his wife journey into the woods in search of a cow, a red cape, a pair of golden slippers, and some magic beans to lift a curse that has kept them childless. Tony Award winners Bernadette Peters, Joanna Gleason, and the rest of the original Broadway cast, weave their magic spell over you in Stephen Sondheim’s masterpiece, directed by James Lapine, a seamless fusion of fairy tale characters and what happens after “happily ever after.”

“Every paint-stroke takes you farther and farther away from your initial concept. And you have to be thankful for that.”

“The only art I’m interested in is the art I don’t understand right away. If you understand it right away it really has no use except as nostalgia.”

Until It Is
This over-sized artist’s book accompanied “Until it is,” a 2002 exhibition by Lawrence Weiner. The exhibit was an installation and audio project produced as part of the Wexner Center’s ‘Notations’ series.