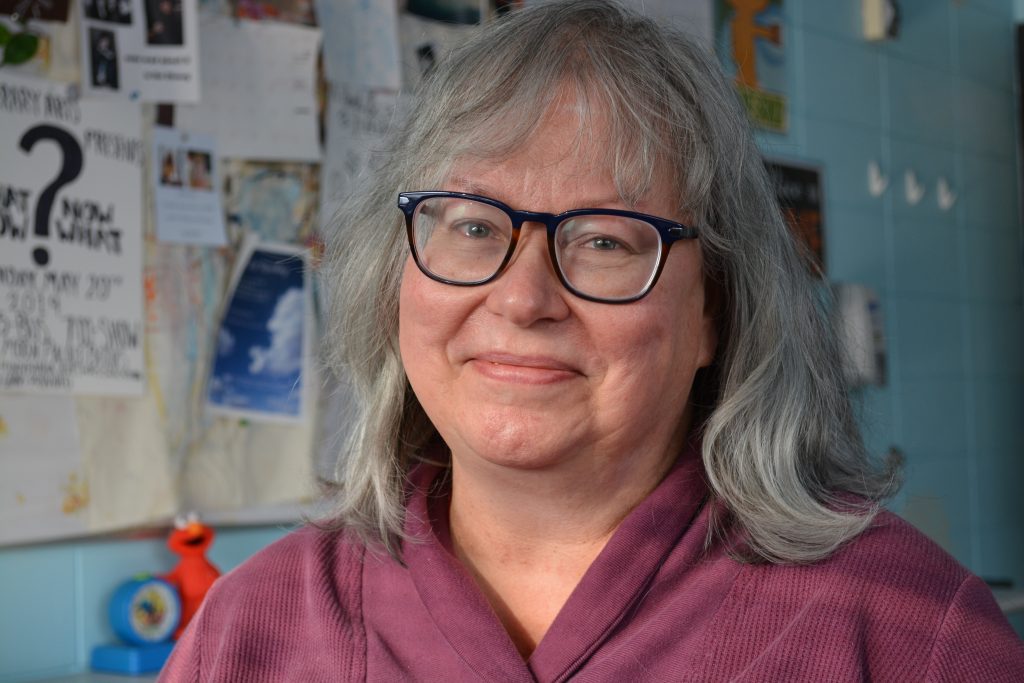 Shannon Hannigan, Literary Arts Instructor, is retiring from Perpich after 31 years of service. Her last day at Perpich is Friday, June 3rd. Shannon started at Perpich in 1991, working as the school’s evening supervisor. In 1994 she became a full-time Literary Arts instructor.

When asked to reflect on her time at Perpich, Shannon turned to her speech from the 2021 Dedication ceremony. She was selected as the faculty Dedication speaker and wrote her love letter to this place. We share that speech with you here: “Hi. I’m Shannon Hannigan and I’m happy to be this year’s faculty Dedication speaker. I teach International Short Stories during Block 3 and Literary Arts for the rest of the day. Some of you know me but most of you probably don’t, so I’m going to tell you a little bit about myself first before I even mention ‘Dedication,’ and well, you’ll have to trust me; it will all be connected.

I grew up in the deep deep woods way up north in a place called Embarrass–yes, EMBARRASS–Minnesota (that’s really the name), and I attended high school in Babbitt, a small town that was built for its iron ore workers by Reserve Mining, one of the many mining companies on the Iron Range that still employed most of the dads I knew when I graduated from high school in 1975. Because of the financial support we received from Reserve Mining, our high school was known for its good science and math programs, but most of all, we were known for ice hockey. Our hockey team was so good that my own chemistry lab partner, Steve Schneider, was the younger brother of Buzzy Schneider, who would go on play on two US Olympic hockey teams, and most importantly the team that won the gold medal against the Soviets and the Finns at the 1980 Winter Olympics.

I bet you didn’t expect to hear about that in my Dedication speech, huh?

You see, it’s not that I completely hated my high school or that there was no ‘art appreciation’ there. I proudly played trumpet in the pep band at every hockey, basketball and football game for four years. I wrote stories back then too and I edited the tiny Lit journal we optimistically made 30 copies of on the ditto machine twice a year–there’s still a moldy stack of them somewhere in my basement– but writing was different from pep band.

Without even asking myself why, I knew I should never share my writing with anyone other than the two kids on the Journal staff and with Mrs. Bronski, my one cool English teacher. We journal staffers met in her classroom during lunch, with the lights off, and kept what we thought were just our nerdy pastimes to ourselves. Sharing anything as intimate as writing in front of your other classmates was unthinkable. If you were anything other than a white male hockey player or their also white cheerleader girlfriend, Babbitt, Minnesota in 1975 was neither the time nor the place to share your true self.

Fast forward to St. Paul, Minnesota, 1989. I had spent several years trying to find my true self after college and during graduate school, because I had wanted to be a teacher like my brothers and Mrs. Bronski, but the only Language arts positions were in huge high schools like the one in which I had student-taught, where teachers had at least 120 students a day and where I couldn’t imagine helping my students find and write about their true selves if I couldn’t even remember their names.

Then something magical happened. One night after my waitressing shift I was hit by a car that messed up my right leg pretty badly. When I woke up three days later I had to quit my restaurant job, and my head injury stopped me from working at all for almost two years. But just when I finally had no choice but to make some money somehow, my friend who was a counselor at the new, cool-sounding but weirdly named Minnesota Center for Arts Education Arts High School said that their dormitory really needed a part-time employee for 10 hours a week. That was magically exactly as much work as I felt I could handle, so I applied and was hired despite still being on crutches.

That little dorm job eventually led to a sort of hybrid job here in the evenings; I had Jerry’s job, locking everything up at night, and I was also an ‘evening teacher.’ I helped kids with their homework and more specifically, with their writing. 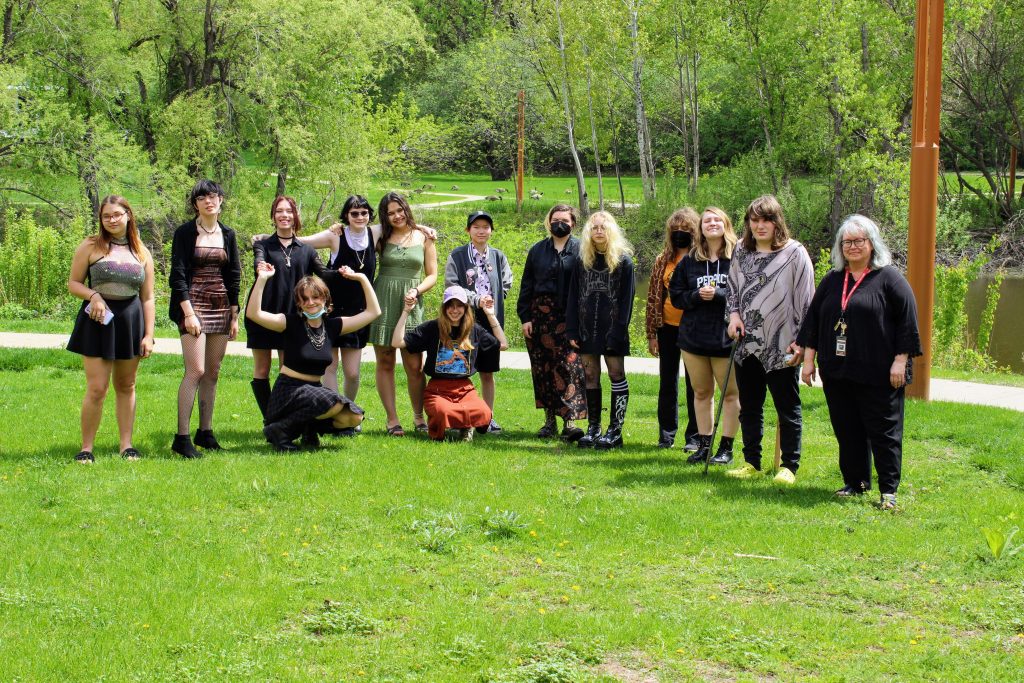 Shannon Hannigan with the 21-22 Literary Arts students prior to their final Lit reading on May 17, 2022.

One day when I was still pretty new, I was making my first rounds of the building when I heard discordant music coming from the dance studio; the rhythm was angular, uncomfortable. As I entered the space to check on things it took a minute for me to recognize that this was a matinee dance concert. There was an alarming rush of blue and green leotards to my left, the dancers seemingly multiplied by the mirrors behind them. Something felt RAW in the room, something very vulnerable was happening on that stage.

The student audience sat on risers before me and I found myself watching THEM intently. I scanned the crowd, looking for eye rolls, waiting for a cat call, waiting for snickering, waiting to move in and pull someone out. I could barely watch the performers because I was protecting them; didn’t they know that what they were doing was too dangerous?

Maybe they did and maybe that was the point.

I remember seeing the audience rise to its feet. The room filled with huge applause and cheering and I was still looking for trouble but there wasn’t any. The next thing I remember was me standing in a bathroom stall down the hallway, because I had suddenly needed a hiding place to sob, to figure out WHY I was uncontrollably crying. Why had NO STUDENTS IN THAT AUDIENCE REACTED LIKE HIGH SCHOOL STUDENTS ALWAYS REACT TO VULNERABILITY, TO SOMEONE TAKING PERSONAL RISKS IN PUBLIC??

And that is simply when and where I, a kid from the north woods, who wrote stories in the dark, for whom there was no Perpich to attend when she was in high school herself, that’s when she and I dedicated ourselves to this place, to this idea of a place where people young and old, where people of all sorts can dare to really explore and share their truths in public with no fear of being eye-rolled or snickered at. THIS place where you eventually even lose the urge to roll your eyes and snicker at anyone else’s truth because #1, it’s not cool to do that here, #2, you and your truth need respect as well, and #3, you find yourself wanting to maintain this anti-eye rolling part of Perpich because deep-down you know it’s still rare and precious.

And so, as I see it, the Perpich Dedication ceremony is not a moment when we expect you all to magically come to the same wondrous epiphany, when we all agree to simultaneously commit ourselves to our education centered in the arts, to each other, to Perpich. I see Dedication as a day when we honor EACH INDIVIDUAL’S moment, whenever and wherever you allow yourself to trust and value what you learn and share with each other in this place.

Maybe you too can decide to spend 30 years here after you find yourself sobbing in a bathroom stall just down the hall from the dance studio. I highly recommend it. That moment for me led to the best teaching job in the world. Please allow yourself to take a risk and dedicate yourself to being true to yourself, to this place, and to each other.

So Happy Dedication Day! And thank you for letting me take the risk to just be my true self today too.”

We thank Shannon for her years of service and wish her the best of luck in this next adventure!

Two weeks after her final day at Perpich, Shannon Hannigan taught her last Literary Arts class at Open Book in downtown Minneapolis. Jodi Kaiser (Literary Arts 1996), Jess Nite (Literary Arts 2002), and Emily Anderson (Literary Arts 2011) organized the event and around forty Literary Arts alumni attended, among them several who had traveled cross-country for the experience. (One Literary Arts 2000 grad flew internationally from Amsterdam!) Many attendees began the day as strangers to each other, representing almost every graduating class between the years 1995 and 2021. And yet, they all knew the routine, quietly writing to Shannon’s prompt, prepared to share their writing aloud for more than three hours. “As Lit kids know so well, by the end of the class, the writers were not strangers anymore,” said Shannon.

Before the class began, Perpich Arts High School Principal, Conn McCartan, made an announcement regarding a new scholarship fund that Shannon’s family has established in her honor. The purpose of the fund is to promote the continuation of the Literary Arts program at Perpich for future students, with the goal of keeping the heart of Lit alive, to support its role as a home to which Minnesota writing students will always want to return. If you would like to join this effort and make a contribution to the fund, please contact Shannon Hannigan at shannonhhannigan@gmail.com.

Lindsay DeLand (Literary Arts 2005) shared the photos below and following comment: “To be the kind of educator who is so inspiring, loving, and powerful that your retirement fills a room with graduates from the class of ’95 all the way to the class of ’21 – all of those graduates just eager to sit down together for one last 4 hour writing and reading session – is something I truly believe only Shannon could ever have done. Thank you, Shannon, for teaching us to write, and to trust ourselves, and to be Lit Kids. We are forever changed from our time with you.” 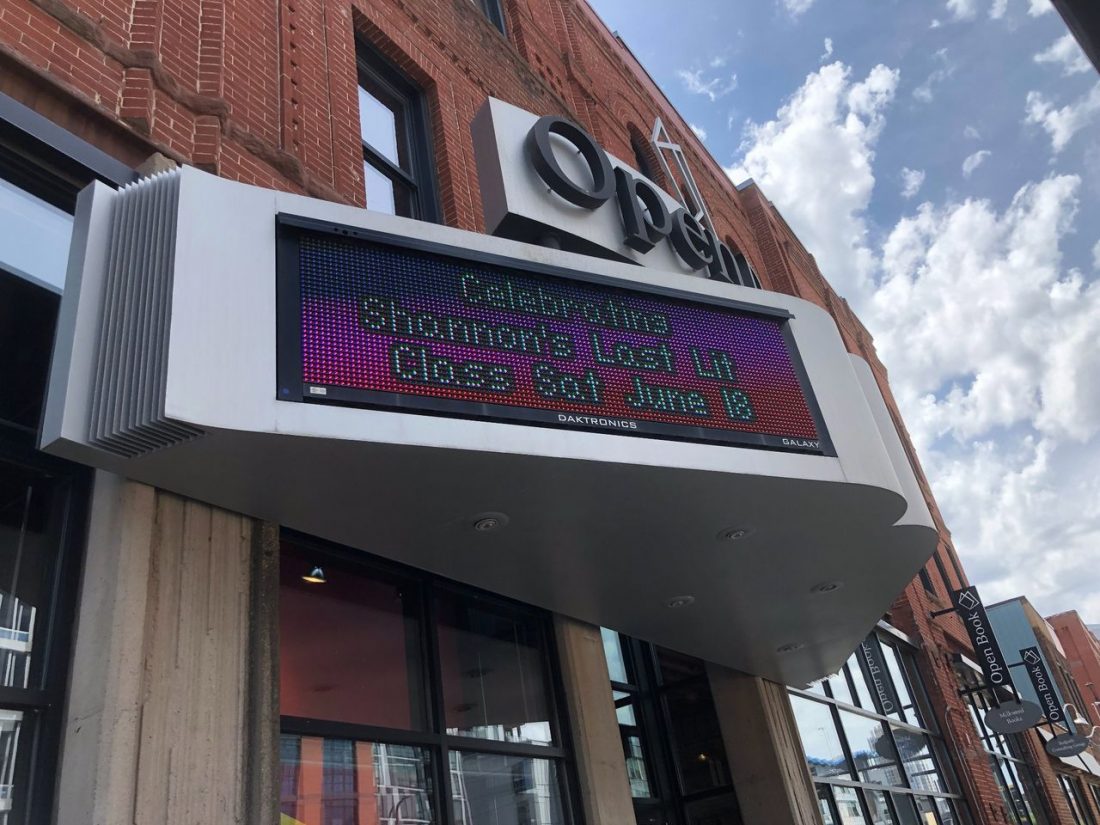 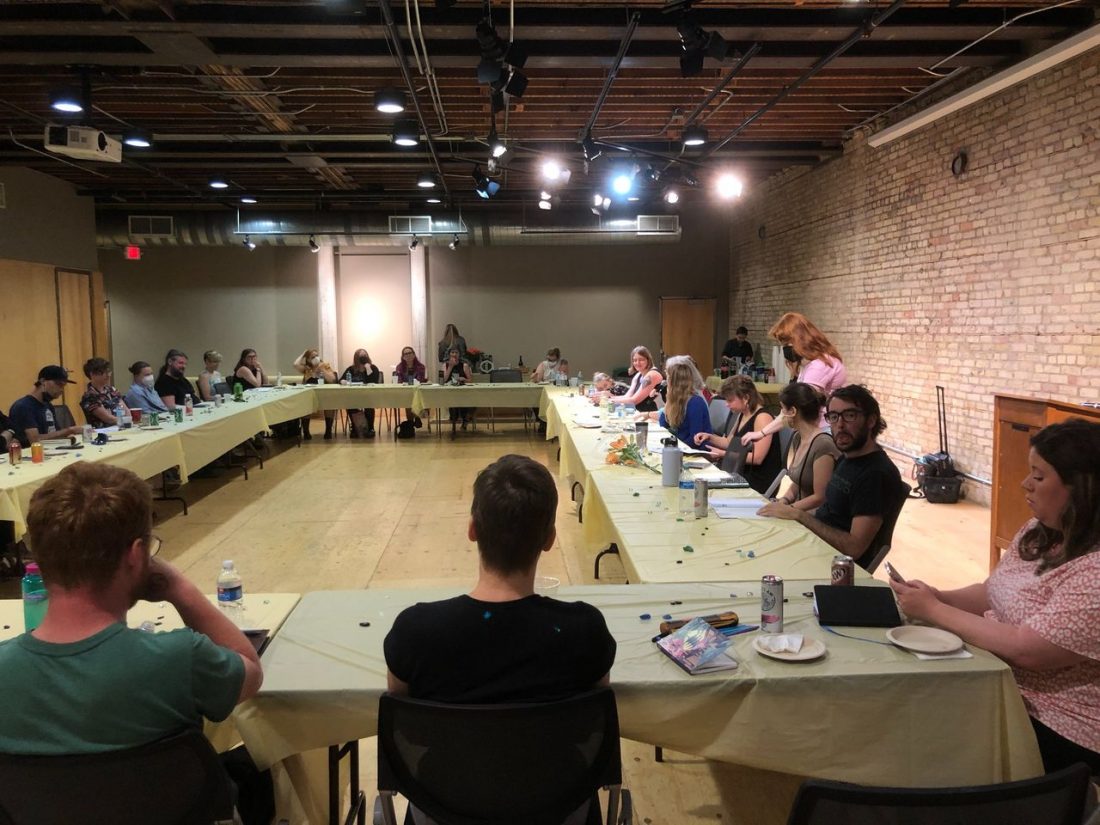 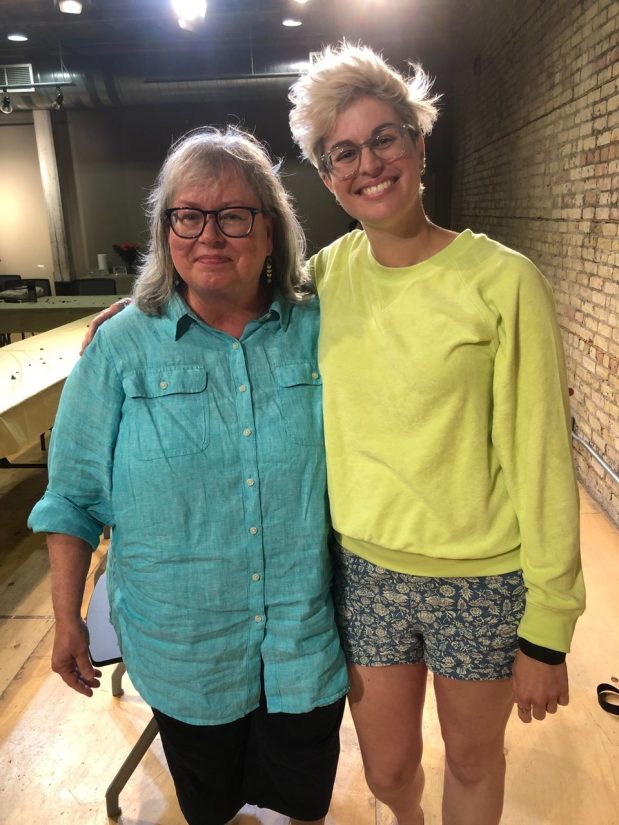