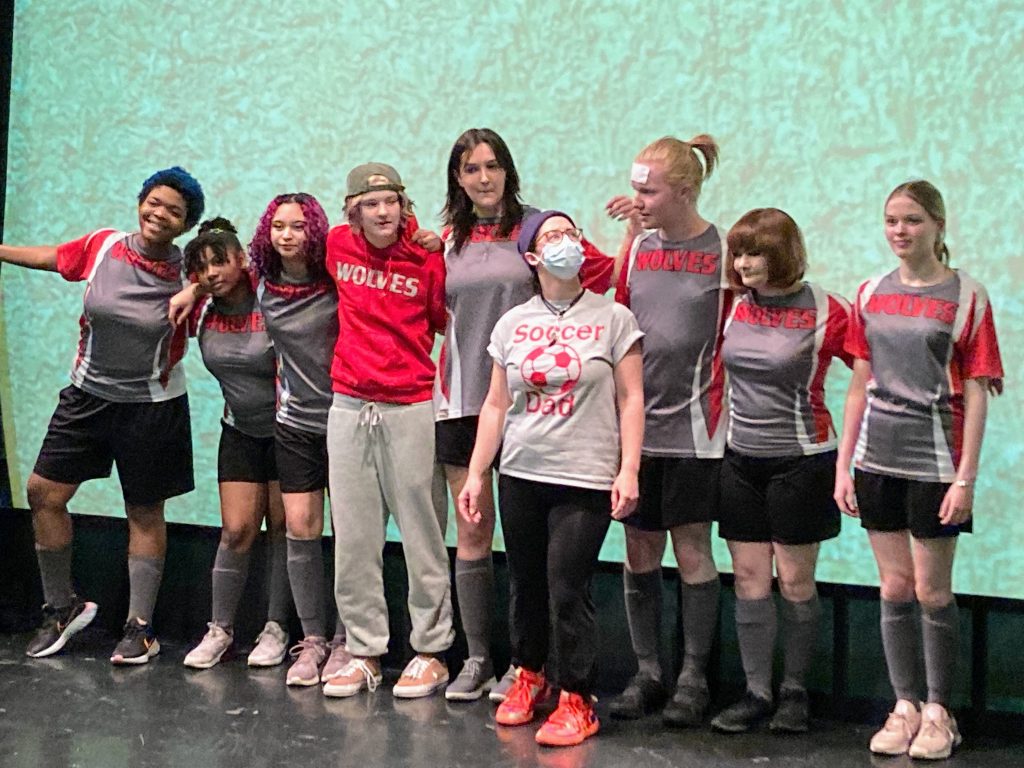 The cast of “The Wolves” by Sarah DeLappe – Perpich Arts High School – November, 2022

The .5 Production Class at Perpich Arts High School presented “The Wolves” by Sarah DeLappe during a two-show run on November 14 and 15, 2022. The class was made up of Theater, Musical Theater, Literary Arts, and Visual Arts students. The show was directed by Christian Bardin, a guest director with ties to many local theater groups.

“The Wolves” centers on the experiences of a high school soccer team through their weekly Saturday morning pregame soccer warm ups. The play received multiple awards and was a finalist for the 2017 Pulitzer Prize for Drama.

The production brought guest director, Christian Bardin, to the Perpich campus. Bardin (she/her & they/them) originally hails from Houston, Texas. They’ve called the Twin Cities home since graduating from Ken Washington’s BFA program at the U in 2011 and have acted professionally in the Twin Cities since 2009. She believes the best work in any discipline comes at the intersection of great risk, great craft, and great love. Favorite “art jobs” are ones where she gets to use her powers for good, including relationships with CornerHouse’s Forensic Interview trainings, Pillsbury House + Theatre’s Breaking Ice workshops, and traditional performance work with the Jungle Theater, Minnesota Opera, Guthrie Theater, The Moving Company, Park Square Theatre, and Sandbox Theatre. Christian is proud to have co-directed the devised work The Nature Crown and to have assisted on the regional premiere of Redwood at the Jungle. Their first full-length album of original music is entitled Shorts. Christian has been working with Upstream Arts since 2020.

Maggie Loxtercamp (Musical Theater 2024), from Bemidji, played #13 in the show. “I really liked how our director made this experience like a professional setting so we get practice for after high school,” said Loxtercamp. “I also liked the people I met. It was a great first show to start my time at Perpich. In just one show, I’ve learned so much from Christian. I’m happy I was a part of it.” 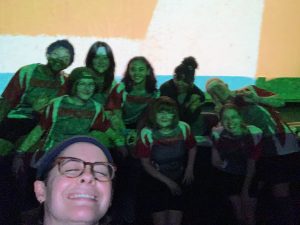 Aiden Ritchey (Theater 2023), from Grand Marais, played #7 in the show. “It was different having a new director. The way that Tory [Peterson, Theater Instructor] runs a show is very different, and I super love doing plays with Tory, AND it was really nice to have a fresh set of eyes,” said Ritchey. “I would love to be able to work with Christian again. They are definitely one of the nicest directors I’ve ever had. People definitely deserve to get to work with Christian. Working with other directors is another great opportunity and experience at Perpich.”

Virginia Rush-Reese (Visual Arts 2023), from Robbinsdale, played #25 in the show. “My experience was wonderful,” said Rush-Reese. “Even though we were acting like a team for the school play, I felt as though I was actually a part of a real team. We always had each others’ backs, whether in practice of the play or performing of the play. We always checked in on each other and made sure everyone was doing alright. I do have a little background in theater, but not as much as I do in visual arts. But one thing about this theater experience that made it different from the rest is that I felt at home. I did not feel as though I was an outsider but rather a part of the team. I went from being a visual artist questioning if I should be the captain of the Wolves to knowing I’m the captain of the Wolves. I’m so happy that I was able to join a wonderful group of actors and create something special and dear that I’ll never forget. They all gave me the confidence I needed to play #25.”

“The Wolves” poster was created by Aiyana Beaulieu (Visual Arts 2024). 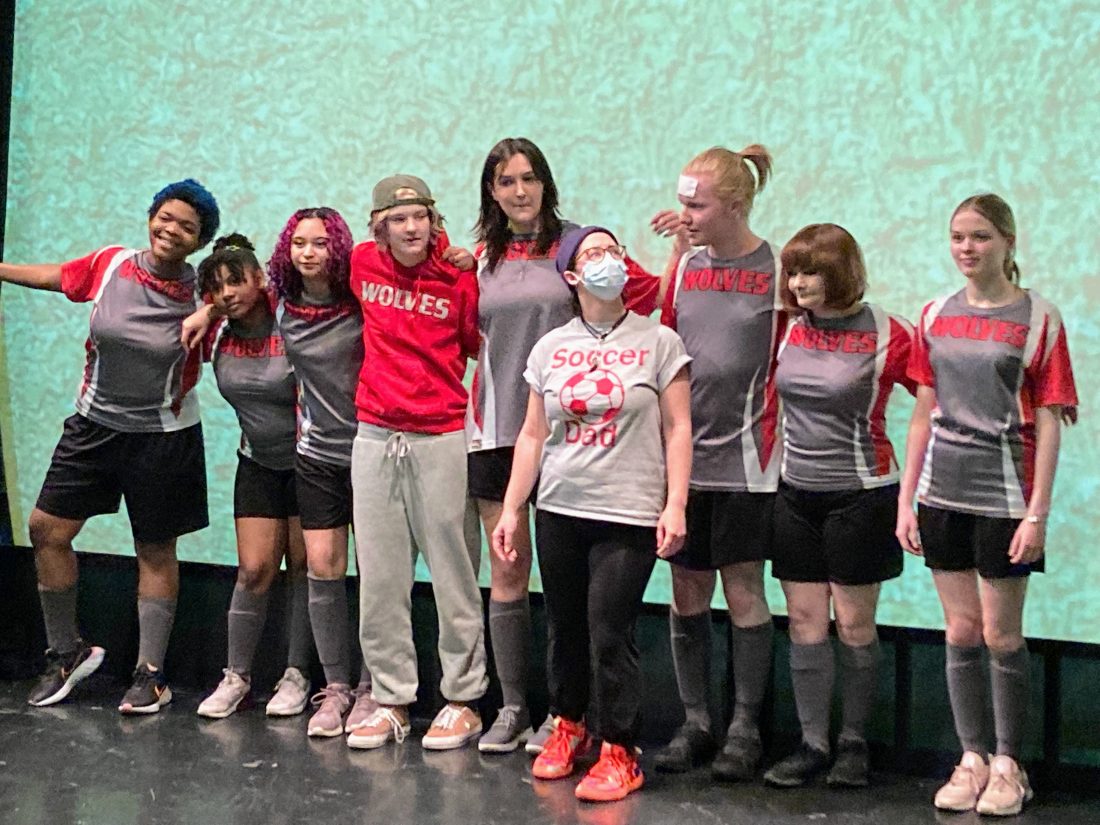 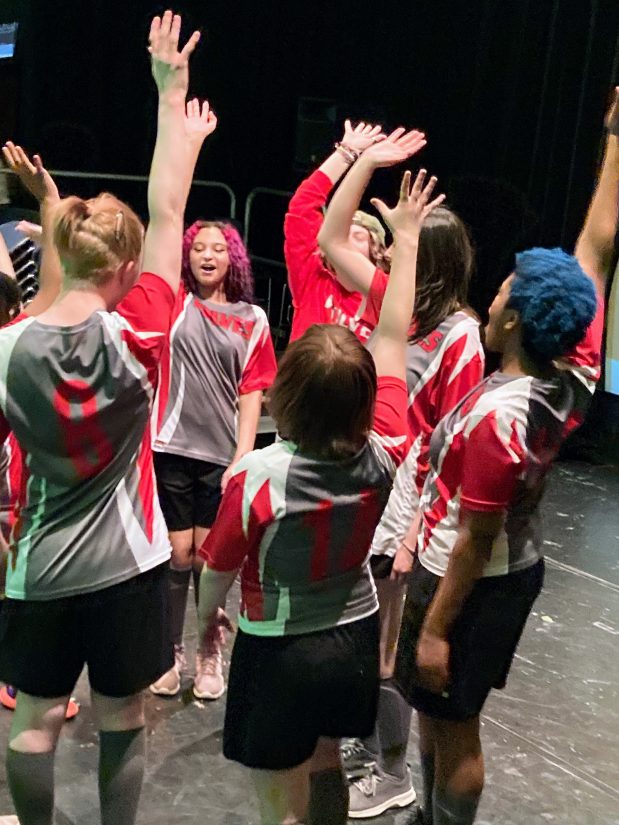 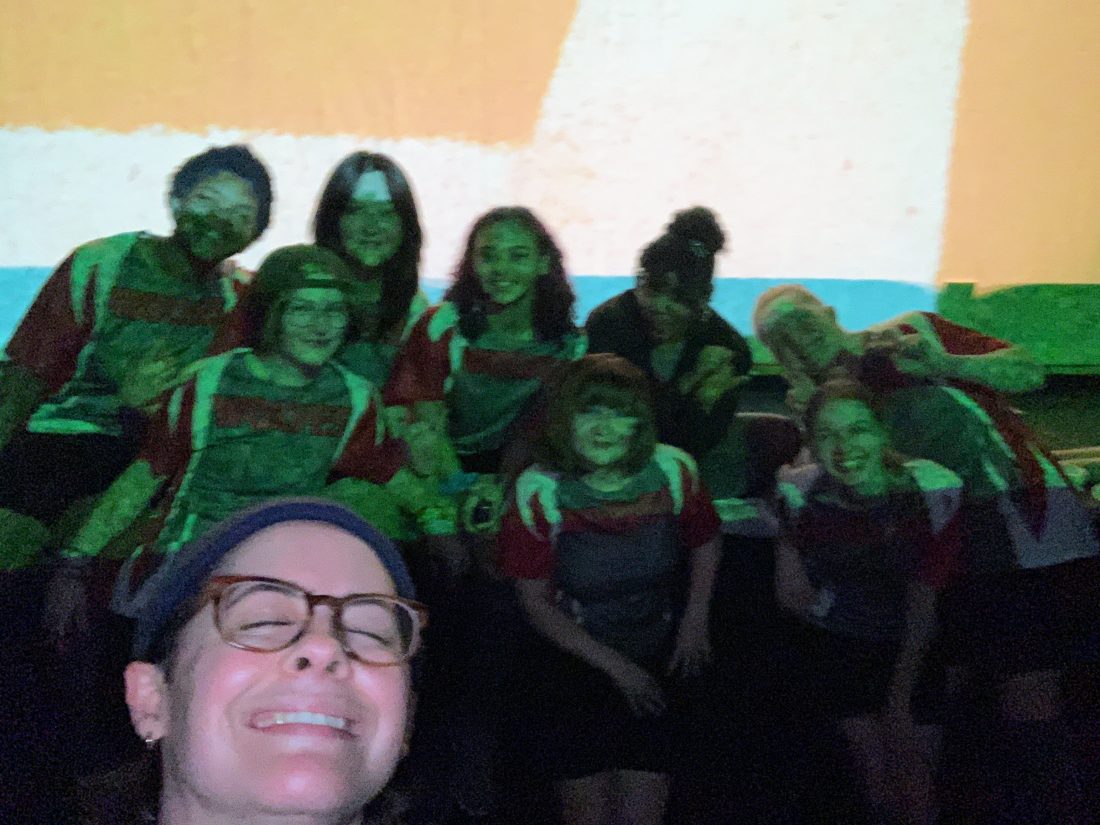