Titles By and About Asian Americans

“A love of reading shows empathy, the desire to understand how others live or act or might act – and why.” – Celeste Ng

This is a small selection of the many materials by and about Asian Americans that Perpich Library has available to borrow. All books on this list, curated by our Perpich librarian, Anne Dennison, are available at the Perpich Library. 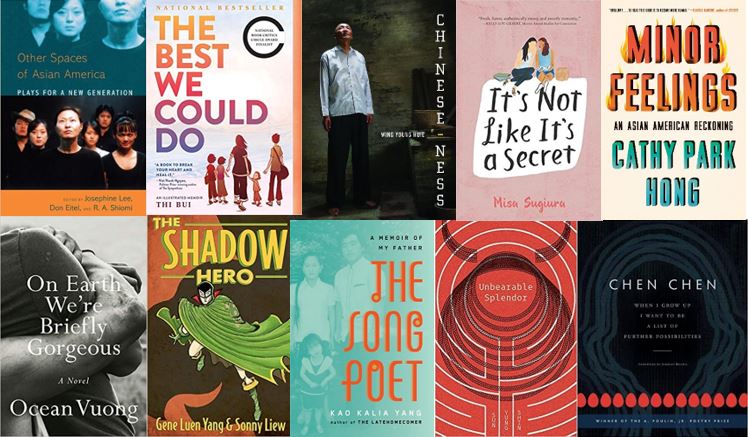 2. The Best We Could Do: An Illustrated Memoir by Thi Bui
This illustrated memoir is about the search for a better future and a longing for the past. Exploring the anguish of immigration and the lasting effects that displacement has on a child and her family, Bui documents the story of her family’s daring escape after the fall of South Vietnam in the 1970s, and the difficulties they faced building new lives for themselves.

3. Chinese-ness: The Meanings of Identity and the Nature of Belonging by Wing Young Huie
Is Chinese identity personal, national, cultural, political? Does it migrate, become malleable or transmuted? What is authentic, sacred, kitsch? Using documentary and conceptual photographic strategies, acclaimed photographer Wing Young Huie explores the meaning of Chinese-ness in his home state of Minnesota, throughout the United States, and in China.

4. It’s Not Like It’s a Secret by Misa Sugiura
Sixteen-year-old Sana Kiyohara has too many secrets. Some are small, like how it bothers her when her friends don’t invite her to parties. Some are big, like the fact that her father may be having an affair. And then there’s the one that she can barely even admit to herself – the one about how she might have a crush on her best friend. When Sana and her family move to California, she begins to wonder if it’s finally time for some honesty, especially after she meets Jamie Ramirez. Jamie is beautiful and smart and unlike anyone Sana’s ever known.

6. On Earth We’re Briefly Gorgeous by Ocean Vuong
A letter from a son to a mother who cannot read. Written when the speaker, Little Dog, is in his late twenties, the letter unearths a family’s history that began before he was born – a history whose epicenter is rooted in Vietnam – and serves as a doorway into parts of his life his mother has never known, all of it leading to an unforgettable revelation.

7. The Shadow Hero by Gene Luen Yang and Sonny Liew
The Shadow Hero is based on the golden-age comic series The Green Turtle, whose hero solved crimes and fought injustice just like any other comics hero. But this mysterious masked crusader was hiding more than your run-of-the-mill secret identity…the Green Turtle was the first Asian American superhero. Now, exactly seventy years later, author Gene Luen Yang has revived this nearly forgotten, pioneering character in a new graphic novel that creates an origin story for the golden-age Green Turtle.

8. The Song Poet: A Memoir of My Father by Kao Kalia Yang
In the Hmong tradition, the song poet recounts the story of his people, their history and tragedies, joys and losses. He keeps the past alive, invokes the spirits and the homeland, and records courtships, births, weddings, and wishes. Kao Kalia Yang retells the life of her father, Bee Yang, the song poet – a Hmong refugee in Minnesota, driven from the mountains of Laos by America’s Secret War.

10. When I Grow Up I Want to Be a List of Further Possibilities by Chen Chen
In this ferocious and tender debut, Chen Chen investigates inherited forms of love and family – the strained relationship between a mother and son, the cost of necessary goodbyes – all from Asian American, immigrant, and queer perspectives. Holding all accountable, this collection fully embraces the loss, grief, and abundant joy that come with charting one’s own path in identity, life, and love.