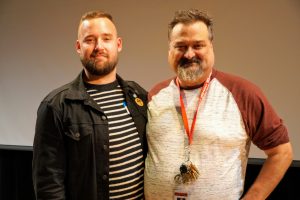 Tyler Jensen (Media Arts 2003) visited with Perpich students on October 21st, 2019, as part of our Common Experience program. Jensen was in town promoting his new documentary Scream, Queen! My Nightmare on Elm Street which sets the record straight about the controversial sequel to A Nightmare on Elm Street, which ended Mark Patton’s acting career just as it was about to begin. Scream, Queen! follows Patton as he travels to horror conventions across the U.S. The film was part of the Twin Cities Film Fest, screening on Wednesday, October 23rd, 2019. Jensen shared the first fifteen minutes of the documentary with the students and then surprised the crowd with an announcement of a private screening for Perpich students later that week. After the private screening, several students attended the meet and greet at the AC Hotel to see Jensen, Mark Patton, and other film crew.

About his time at Perpich, Jensen said the thing that he still carries with him is the sense of community. “It was wonderful to come here as a high schooler and feel validated and accepted and that you had the talent to create things. That is unlike any other place else I’ve been to since high school, which was a little disheartening after I graduated. But I had to take that sense of community and build it for myself; finding other like minded people who wanted to make things and had the passion and drive to do that. This place is wonderful for incubating all of those people and the friendships that you make here are lifelong. We are still supportive and congratulatory of each other and that’s a beautiful thing that Perpich creates and it’s the one thing that I take with me.” 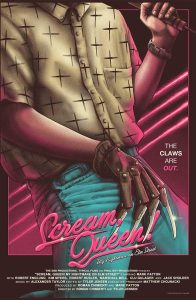 After his visit, Tyler posted this on his social media: “I went back to my old high school today. It was strange to re-enter that space, no longer a student, but as a working professional. I remember how desperately I needed this place when I was younger, to be in the company of other creative people, to learn from them. It was here where I first saw Diane Arbus photographs, French New Wave and Troma films, where I read Langston Hughes and Toni Morrison, its where I was when the twin towers fell and where I first told someone I was gay. I shared the first 15 minutes of Scream, Queen! with high school juniors and seniors, all with varying degrees of familiarity with Freddy Krueger, but die hard devotion for @nightvaleofficial. I wandered the halls after, to see if my old locker had been repainted (it hadn’t) – I walked into the photo lab to see if it smelled the same (it did). Kids walked up to me to say they liked the movie and wanted to see more. One told me her favorite horror movie was Silence of the Lambs and another said Jennifer’s Body. A few more waved at me from the cafeteria and I noticed they updated to circular tables. Arts High was still very much as I left it, and the echos of all the kids I knew there seemed to linger. As I headed out, I noticed the Scream, Queen! poster hanging on the open door to the visual arts studio, and I gasped quietly, realizing that this film wasn’t an idea anymore, but very much a real and tangible thing, that was finding its way into the world little by little. Making my way to the car I hoped that this place was still a refuge to these kids, that it was as important to them as it had been for me. Thank you, Tory, for bringing me back to Hogwarts for another spell; it was magic.”

Up next for Tyler: they have screenings lined up in several more U.S. cities followed by Europe: Italy, Amsterdam, and London. Next March, they will travel to Australia. They also have a college tour planned.

Tyler Jensen is a director and editor based in New York City. He started making movies in his Minnesota basement, re-creating the likes of Speed and Rocky Horror Picture Show with action figures, happy meal toys, and hand drawn sets at the age of 11. He went on to study film and photography at Perpich Center for Arts Education and Minneapolis Community And Technical College. His month long filmmaking endeavor, 30 films/30 Days, had him writing/directing/shooting/editing/and publishing a new short film for 30 consecutive days and won the audience award at the Minneapolis Underground Film Festival. He’s created original music videos for the likes of CHVRCHES, Big Dipper, The Carry Nation, Matracia, Skeleton Head, and L’Assassins. He was director of photography on Big Freedia Queen Of Bounce for Pitchfork.TV and edited the award winning music video Dirty Boots for Holopaw. He has shot and edited for Dress Code and produced original content for The MacDowell Colony. His short form narrative, documentary, and music video work has been featured on The New Yorker, Vice, Pitchfork, Boiler Room, TPT Channel 2, and The Walker Art Center. Scream, Queen! is his first feature length documentary. 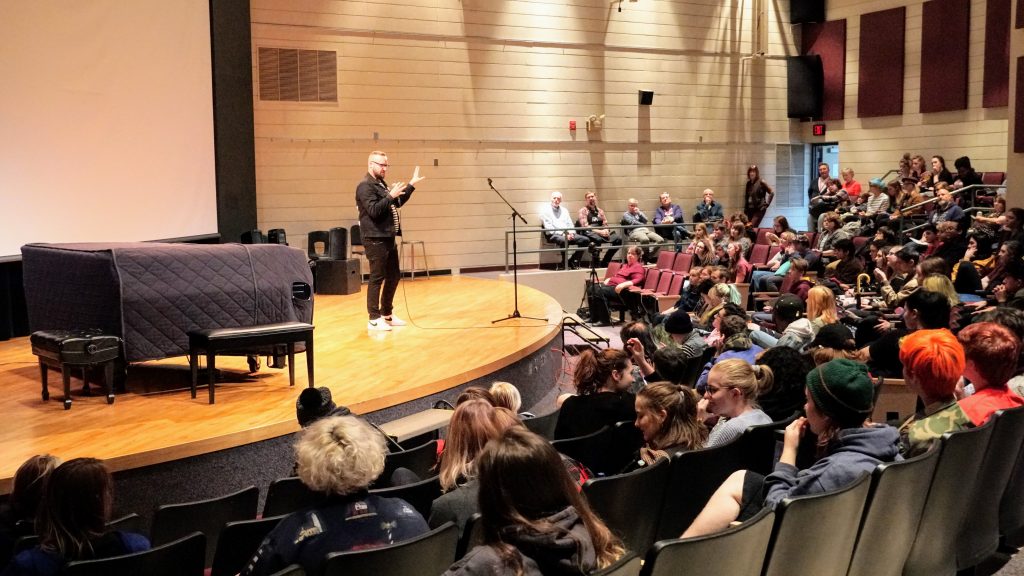