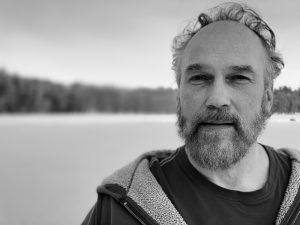 Congratulations to Bob Frey, Social Studies Instructor, on releasing his newest album, Ghost. The album is a follow-up to Frey’s 2017 LongShot Deal album. Ghost was released in June, 2022 and is Frey’s fifth album.

Discussing the songs in the album’s liner notes, Frey writes, “A murder ballad, songs of Love and Loss and Time and Struggle… I wrote all but a couple of these songs in the midst of my wife Laura’s ongoing dance with Stage IV cancer, now 11 years and counting… To me, they have a very traditional feel, many resting upon very old lyrical forms of folk & blues. I left them very sparse… I wanted them to sound like they sounded when I played them in that big room in the woods.”

Recorded in the Northern Wisconsin woods, the album is a collection of songs that already feel part of the folk canon. With sparse instrumentation (acoustic guitar, violin, electric guitar, harmonica) and Frey’s vocals, the album has already received acclaim from the music world.

In a pre-release review on Folking.com, Bill Golembeski writes, “Midwest singer-songwriter Bob Frey’s new Ghost album is a sincerely whittled selection of whiskey-soaked and quite wonderful songs that bleed with Gothic folk campfire prayers… and, as said, certainly conjures the deliberate enunciation of Bill Morrissey, and perhaps hits the brutal and brilliant honesty of a song by Jim Croce like ‘Lover’s Cross’.” 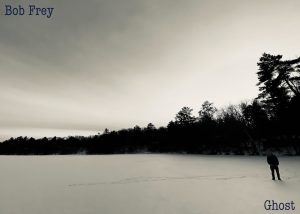 Giving the record an 8.5/10 in Maximum Volume Music, Damian Sullivan suggests, “Ghost at times is a difficult listen. It’s not that it’s not enjoyable but that it’s an honest account or reflection on things that the singer is enduring or has lived through and with and you almost feel that you are intruding on something really personal. This singer–songwriter has what I’d call a lived-in vocal that really draws you in. At times I really felt that he had an inflection or tone that sounded similar to the sadly missed Vic Chesnutt. I think at times you could read whatever you want from the lyrics so we can all take something away. It’s an emotional offering but I’m sure that it was quite liberating for the artist. The message I will take from this album is that ‘Life is a journey to be lived and not a problem to be solved’ and that’s no bad thing.”

Bob Frey began teaching at the Arts High School in 2002. Prior to teaching, he worked in the Twin Cities legal community. He has a B.A. in Political Science from Miami University in Oxford, Ohio and a J.D. from Case Western Reserve University School of Law in Cleveland, Ohio. He completed his teaching certification at the University of St. Thomas in Minneapolis. Bob has performed in Minneapolis as a singer-songwriter since 1993 and continues to write, play, and perform around the Cities and beyond. Frey has written and released five solo albums; Ghost is his most recent one, released in June, 2022. Frey’s music has been featured on 89.3 The Current, Cities 97, KFAI, KARE11, Twin Cities PBS (TPT), Pandora, Apple Music, Spotify, and numerous other stations and streams across the country. Bob lives in Minneapolis with his wife Laura, son Jonathan, and their dog, Iggy. He is an avid supporter of all Cleveland sports teams. You can visit Bob’s website for more information: https://www.bobfreymusic.com/

You can listen to Frey’s recent album, Ghost, at the following links: