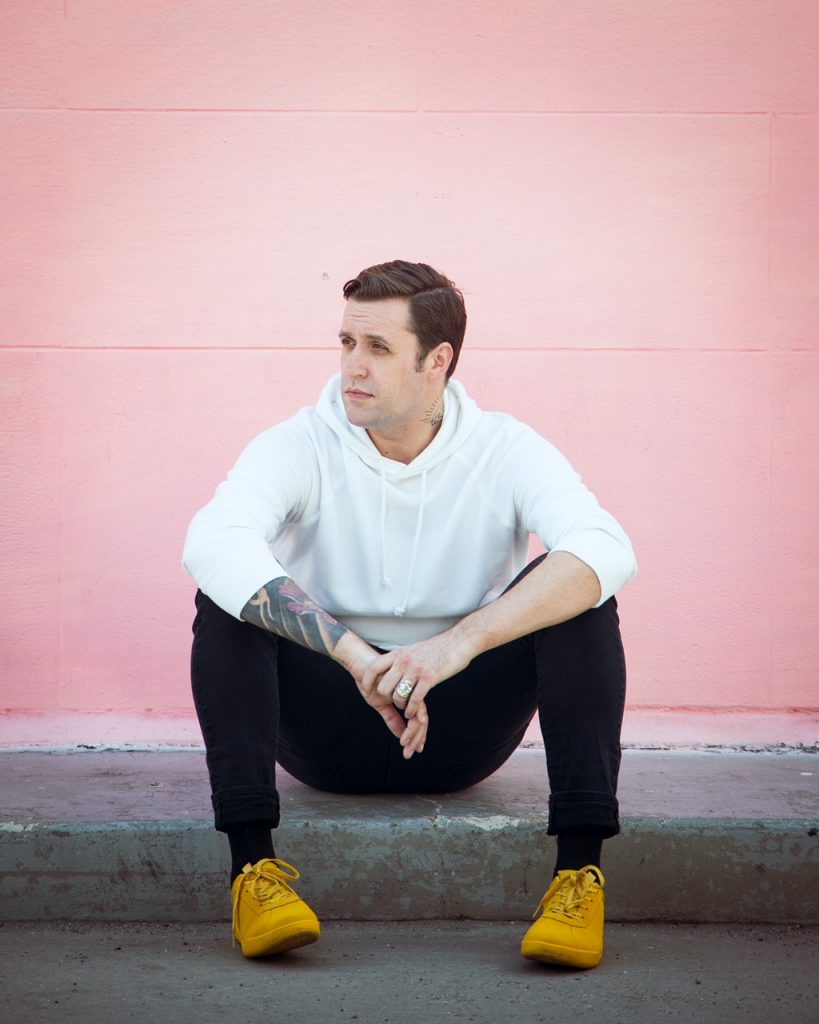 Mux Mool, also known as Brian Lindgren (Visual Arts 2001), is an American electronic musician, producer, and visual artist. From Red Wing, Minnesota, he made his first electronic track in 1998 and began his education at Perpich in 1999.

Perpich – How did you learn about Perpich? What was the experience like for you? Can you see connections to your arts high school experience and your current work?
Lindgren – I heard about Perpich through a good friend’s mom. That friend and I were always very competitive with our drawing skills so when I heard he was applying, I knew I had to try. My experience at arts high was absolutely one of the most informative and useful experiences for me in pursuing art. I learned how important understanding art history was (shout out to Craig Farmer), I learned the qualities of what finished art should have, I learned how to deal with a lot of the personality traits of other artists that I would come to encounter again and again throughout my career, and also how to give and take useful criticism on your work, which is absolutely vital for growth. I was always interested in making music with computers and actually, I met one of my beat making mentors at Perpich and we’ve been in touch ever since. My arts high experience taught me the follow through that is necessary to display and release your art, it helped solidify my passions as being worthwhile pursuits, and gave me plenty of skills to deal with the challenges that would inevitably come as I went forward.

Propelled by the work ethic he gained at Perpich, Lindgren fell into music naturally. He recalls, “I made a song in 2006 and uploaded it to MySpace. An A&R person for Ghostly happened upon my profile and put it on a compilation. The first song I ever put out ended up on an iTunes ‘Best of the Year’ list alongside Flying Lotus and Justice.” Time spent studying visual arts at Perpich provided Lindgren with discipline and structure. “Pursuing my passion for drawing taught me to work on a craft and master it. I was able to apply that to music.” Art school also honed his ability to focus and complete projects. “There are a lot of artists who make a song that they’re very excited about, but I learned some of those finishing qualities [at Perpich],” he said.

Lindgren moved from Minnesota to New York City in 2008 and then moved to Denver in 2013. “When I came to Denver, there were a lot of musicians, but I was the only one that had ever worked with a legit record label,” he said.

Lindgren was dubbed Mux Mool by a band he admired after he posted a blog on MySpace, soliciting fans to submit names for his project. “I couldn’t think of one for myself,” he explains. “After I asked for ideas, a band reached out and suggested Mux Mool. I was like, ‘That sounds like me. I’ll take that.’ Mux is short for ‘multiplexing,’ which is the streaming of many types of information through one channel,” he explains, “and Chac-Mool is an ancient Meso-American statue of a reclining man.”

Mux Mool’s lastest album, Skulltaste II, released earlier this year.
Perpich – What was it like releasing new music during the pandemic?
Lindgren – We had scheduled this release back in January so, of course, we didn’t know we were gonna be releasing during a pandemic. The hardest part of releasing during a pandemic is that we couldn’t tour the album as we had planned. We discussed perhaps pushing back the release until fall, hoping that maybe we’d be able to tour it then, but ultimately I decided that people need new music and joy now more than ever and so we went ahead with it. I was able to play a release party though. It was a fun, socially distanced show and I had a blast.

Perpich – What can you tell us about the album?
Lindgren – Skulltaste II is the follow-up to my first full length album Skulltaste, which was released in 2010. I’ve made albums in a few different ways but I wanted to make this one a sequel because I was returning to some of the methods and samples I had used to make the first album. Skulltaste II just started having the same spirit as the first, even before I had titled it. It was a fun, diverse sounding electronic album.

The music on Skulltaste II bounces from style to style like a perfect DJ setlist – big beat, hip-hop, experimental. While contemporary, the record harkens back to classics by the Chemical Brothers and Fatboy Slim – albums with trajectories, that demanded start-to-finish listening sessions. His first album, Skulltaste, was made with beats that Lindgren made in his bedroom. Those beats took him all over the world. For Skulltaste II, he went back to that bedroom where inspiration first hit. Mux Mool and his record label, Young Heavy Souls, produced an album with more original soundscapes, skilled finger drumming, and a sharper streamlined vision. “It’s hard for me to pinpoint what made Skulltaste as influential as it was. I was just a guy in a room, making beats and learning how to make beats, and I think that can be heard in the album. I also think that’s why it makes such a good backdrop for all creative endeavors. Skulltaste II aims to be a more mature version of that,” Lindgren explained.

Perpich – How long have you been with Young Heavy Souls?
Lindgren – I’ve been working with Young Heavy Souls since 2016 when we released Implied Lines. They’ve been fantastic. They really know how to release proper records and they do a lot of vinyl, which is great. I’ve done 3 vinyl releases with them and Skulltaste II even has a special bright, red vinyl which is just so cool.

Perpich – Is there anything you’d like to share that we didn’t discuss?
Lindgren –  I just really want to shout out Karen Monson and Bill Jeter for pushing me and expanding my skill set, and shout out to all the teachers there for helping artists who are ambitious and spirited and helping keep the art world alive.