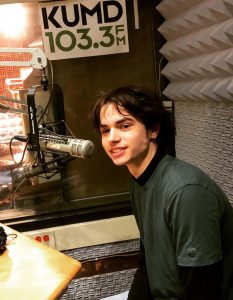 Congratulations to John Thro (Music 2021) on releasing his newest album, A Week with Annabelle. John graduated with honors from Perpich Arts High School on May 28, 2021. He will study Audio Arts at Columbia College in Chicago in the fall.

John, who goes by Thro for his music, began writing A Week with Annabelle in the summer of 2019, right before attending Perpich as a junior. “The title for the project just came to me at the time. I’ve always liked the name Annabelle and find it equally beautiful as it is haunting,” he recalled. “The only track I had finished for the project at the time, Vampire Pills, was recorded in a two week period in the summer where I was on a heavy dose of antibiotics. I couldn’t go outside in the sun for long. Vampire Pills was a placeholder name for the save file on my laptop but I eventually decided just to keep the name. I had other song ideas written down and pieces recorded in this time, but I went to Perpich and the project was pushed to the side, later to be revisited with a new mindset.”

While attending Perpich, Thro learned a lot more about making and playing music. He learned most of this new knowledge from jamming and collaborating with peers in the music department. “I created songs with other students for class and even made a whole music project with a friend of mine in the department in hopes of finding gigs outside of school,” he shared. “The music I had been working on while attending school at Perpich was starting to get really abstract and leaning more towards a soundscape art style than a song to bop your head to.”

One of Thro’s fans was his Perpich dorm roommate, Laurent Dyal (Visual Arts 2021). Laurent was one of only a few people that had heard the song Vampire Pills. “He constantly told me that I should create some more songs like that one instead of the ‘whale noises’ I was making at the time. At points throughout the year, he would say ‘If you release Vampire Pills, I’ll make an animated music video for it.’ I didn’t know whether he was serious or not about his offer, but I knew a music video from a talented animator like him would be a great honor,” said Thro. “It was the summer after [junior year] when he finally convinced me how serious he was and if I was going to release Vampire Pills then I figured I should also dust off the (semi) old project idea A Week with Annabelle. However, this time I would start from scratch and incorporate some of the new song writing practices I had recently picked up.”

Once he committed to the project, it all came together very quickly and naturally for Thro. He recorded a couple of songs that were written at Perpich and used similar writing techniques for a few more songs that summer. Writing and recording the project only took about one and a half months. The lyrics for The Fifth Apartments Revisited reflected the health problems that John was dealing with at that time. “Annabelle was supposed to be a new Vampire Pills, using a similar vocal chop style. The song Grey I wrote at Perpich and thought it fit with the others. And the song Goodbye… was a song I wrote about the friends I had made at school and had to leave in the abrupt ending where I didn’t get to say goodbye to anyone,” said Thro. March 16, 2020 was the last day of in-person school that year due to the COVID-19 outbreak.

With the writing and recording complete, all that remained was for John’s former roommate to finish the animated music video he has promised and for John to plan out his marketing strategies. “Figuring out how to promote yourself in a new landscape, where no one was meeting in person, was hard. But eventually I had built myself online a little bit. I had enough favors with people online who owed me, where I could get my project on their social media, giving my release of A Week with Annabelle in March a good amount of first listeners,” said John.

Marvin Themix from KUMD in Duluth sat down for a conversation with Thro earlier in the spring. In the radio interview, John discusses A Week with Annabelle and the inspiration he gathers for his songwriting from his spring walks up the Lester River.

You can listen to Thro’s project, A Week with Annabelle, at the following links. The animated music video created by Laurent Dyal is posted below.