October is Spooky Season! For many in the Perpich community, it is their favorite time of year. It’s the season to dress up in fun costumes, watch scary movies/tv shows, read creepy books, and add pumpkin spice to almost everything you ingest! Here is a list of graphic novels to put you in the mood. Some are scary and some are silly, but all are perfect for the spooky season. All items are available at the Perpich Library. 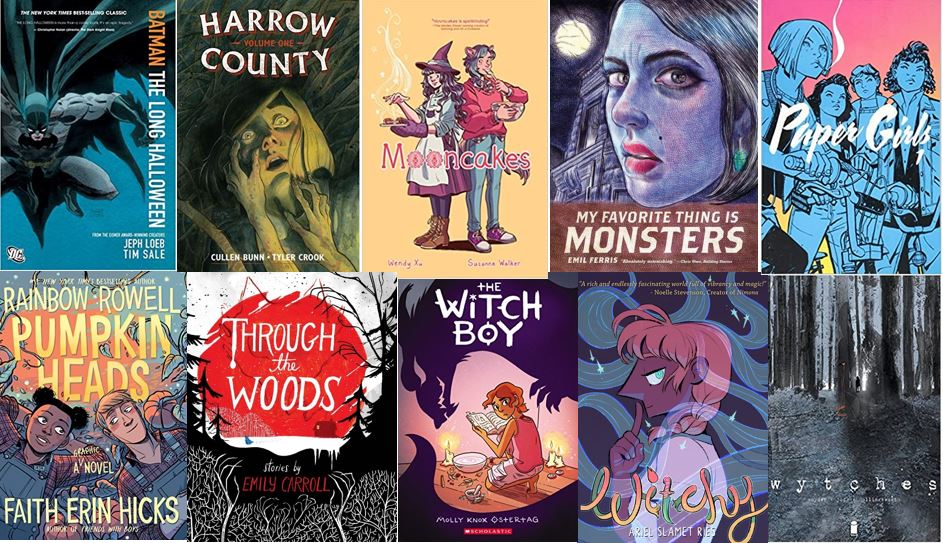 1. Batman: The Long Halloween by Jeph Loeb and Tim Sale
Christmas. St. Patrick’s Day. Easter. As the calendar’s days stack up, so do the bodies littered in the streets of Gotham City. A murderer is loose, killing only on holidays. The only man that can stop this fiend? The Dark Knight. In a mystery taking place during Batman’s early days of crime fighting, Batman: The Long Halloween is one of the greatest Dark Knight stories ever told.

2. Harrow County, Volume 1 by Cullen Bunn and Tyler Crook
Emmy always knew that the woods surrounding her home crawled with ghosts and monsters. But on the eve of her eighteenth birthday, she learns that she is connected to these creatures – and to the land itself – in a way she never imagined.

3. Mooncakes by Suzanne Walker & Wendy Xu
A story of love and demons, family and witchcraft. Nova Huang knows more about magic than your average teen witch. She works at her grandmothers’ bookshop, where she helps them loan out spell books and investigate any supernatural occurrences in their New England town. One fateful night, she follows reports of a white wolf into the woods, and she comes across the unexpected: her childhood crush, Tam Lang, battling a horse demon in the woods. Their latent feelings are rekindled against the backdrop of witchcraft, untested magic, occult rituals, and family ties both new and old in this enchanting tale of self-discovery.

4. My Favorite Thing is Monsters by Emil Ferris
Set against the tumultuous political backdrop of late ’60s Chicago, this is the fictional graphic diary of 10-year-old Karen Reyes, filled with B-movie horror and pulp monster magazines iconography. Karen Reyes tries to solve the murder of her enigmatic upstairs neighbor, Anka Silverberg, a holocaust survivor, while the interconnected stories of those around her unfold. When Karen’s investigation takes us back to Anka’s life in Nazi Germany, the reader discovers how the personal, the political, the past, and the present converge.

5. Paper Girls (vol 1-6) by Brian K. Vaughan & Cliff Chiang
In the early hours after Halloween of 1988, four 12-year-old newspaper delivery girls uncover the most important story of all time. Stand By Me meets War of the Worlds in this mysterious young adult adventure.

7. Through the Woods by Emily Carroll
Discover a terrifying world in the woods in this collection of five hauntingly beautiful graphic stories that includes the online webcomic sensation His Face All Red, in print for the first time.

8. The Witch Boy by Molly Knox Ostertag
In thirteen-year-old Aster’s family, all the girls are raised to be witches, while boys grow up to be shapeshifters. Anyone who dares cross those lines is exiled. Unfortunately for Aster, he still hasn’t shifted and he’s still fascinated by witchery, no matter how forbidden it might be. When a mysterious danger threatens the other boys, Aster knows he can help – as a witch.

9. Witchy by Ariel Slamet Ries
Young witch, Nyneve, is haunted by the death of her father and the threat the Witch Guard poses to her own life. When conscription rolls around, Nyneve has a choice to make: join the institution complicit in her father’s death, or stand up for her ideals.

10. Wytches by Scott Snyder & Jock
Everything you thought you knew about witches is wrong. They are much darker, and they are much more horrifying. Wytches takes the mythology of witches to a far creepier, bone-chilling place than readers have dared venture before. When the Rooks family moves to the remote town of Litchfield, NH to escape a haunting trauma, they’re hopeful about starting over. But something evil is waiting for them in the woods just beyond town. Watching from the trees. Ancient…and hungry.